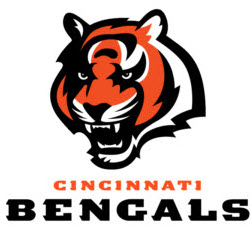 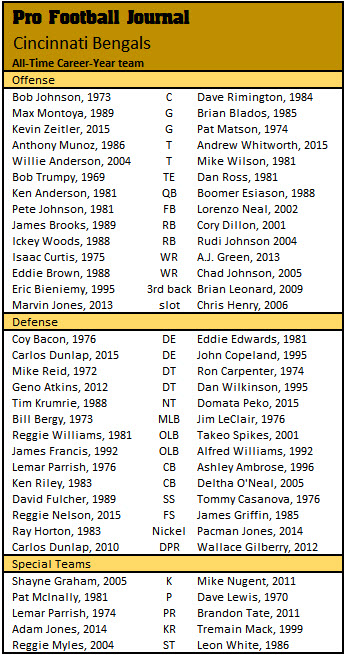 The First-team selections were fairly easy, the Second-teams, not so much. Zeitler was PFJ All-Pro in 2015. Pat Matson was very strong, one of the  and several seasons would have been a good choice for the Second-team but we went with 1974. , well, it was hard. In 1985 Paul Zimmerman picked for his Sports Illustrated All-Pro team. He felt Blados did well against Randy White. Peter King, now of Sports Illustrated told Zimmerman, "I was in the Bengals locker room the day that story came out. There was a lot of head shaking". Zimmerman chagrined , "well he did well versus "short-armed guys. Then he smiled and said, "Oh well, can't get ' all right". However, Blados was pretty good that year, so give him his due.
An All-Pro in 1973, Bob Johnson was one of the first big, tall centers (he was 6-5) and played for a long time. Rimington was hurt a lot, but in 1984 put together a good season. Montoya .
Munoz had many great seasons. We went with 1986. It was called by Bengals line coach Jim McNally "Munoz's best season" and Munoz concurred. It was also the highest  received from Proscout, Inc. Back then, there were various awards that were given out to position players, i.e. Offensive Lineman of the Year, Defensive Lineman of the Year, etc. They were given out by the NFLPA, NFL Alumni, Seagrams, Miller Lite and others. Munoz won one of those awards in seven different seasons, sometimes more than one in a season. The seasons: 1981, 82, 85, 86, 87, 88, 89. Those are not the All-Pro selections (he was First-team All-Pro eleven times), but an award that had him compete with centers and guards as well as tackles for the honors.  Pretty heady stuff.

Willie Anderson had several good years but we went with 2004, He allowed just one sack allowed and two holding calls and was a First-team All-Pro. Whitworth has been coming on and on some teams, he'd be a First-team selection, but with Munoz and Anderson on Bengals, he's relegated to Second-team. We went with Mike Wilson's 1981 season because he was the 3rd highest-ranked offensive tackle that season by Proscout, Inc. He was also third in 1982, but we went with the Super Bowl season and not the one that was shortened by the strike.

Vern Holland was a Second-team All-AFC in 1975 and gets a mention. He was a big, athletic guy who no strength. He had functional football Bob Trumpy's book Trump: Ten years with the Bengals opined that Holland couldn't bench press his own weight and that speaking of weight, Holland had one. He was fat and when coaches would want him to hit the gym, he'd say "Leave my fat alone". It follows that he and Andre Smith are the "fat" kings of the Bengals right tackles. Pete Johnson is the old-school fullback, runner, and blocker. Lorenzo Neal is the 1990s-2010s style "guard in the backfield" type, a blocker and sometimes receiver.

We went with James Brooks because we loved his tough running style and his high yards per carry average. Icky Woods gets the other First-team slot. Dillon and Johnson were next, due to rushing yards. For the Bengals, we added a third-down back position since they have used one for many years. Archie Griffin and others did well, but Eric Bieniemy (1995) and Leonard were most effective in our view.
Essex Johnson, 1973, and Boobie (insert Beavis and Butthead laugh here)  Clark, 1973, get an honorable mention.

Okay, yes, we left out A.J. Green. Though he has monster seasons, in context, based on how the game was played, he has not stepped up to beat out his peers for All-Pro Selections like the four players ahead of him. Eddie Brown and Isaac Curtis's seasons, and their yards per catch made them threats from anywhere. Isaac Curtis could catch 40 passes in a season (which does not seem like much by today's standards) in say, 1975 but still draw double coverage. He, Cliff Branch, Roger Carr, Harold Jackson, and others didn't amass big catch totals in the "dead-ball" era of the 1970s NFL, but they were well by defensive backs.

A.J. Green and Chad Johnson are the Second-team picks. Green has the ability to top what he's done already and he's been terrific so far.  Collinsworth is an honorable mention for his 1981 season, he was Second-team All-Pro and a Pro Bowler.

Coy Bacon led NFL with 21½ sacks and had 59 tackles and 3 forced fumbles in 1976 as he was named Second-team All-Pro. Carlos Dunlap broke  Eddie Edwards's "" team record for sacks with 13.5 in 2015 and was a Pro Bowler. "Fast" Eddie Edwards had 11 sacks and 47 tackles and was named Second-team All-AFC in 1981. John Copeland is a personal choice, playing the run very well and getting 9 sacks in the scheme he was asked to play in 1995 was too good to ignore. Ross Browner had several seasons worthy of honorable mentions and Gary Burley's 1976 gets an honorable mention as a DE.

is a 4-3 defensive  but is a "shade" tackle, one who plays the nose, essentially, and he's been solid for years and deserves the Second-team selection. Tim Krumrie, maybe the most productive tackler among nose tackles, ever, was an easy selection for his 1988 season.

Bill Bergey's 1973 was excellent, he had 152 tackles, which would have been a  until 2013 if the Bengals had kept the back then and he gets the MLB First-team spot. Jim LeClair, as a 3-4 ILB, got some post-season honors, and gets the other inside slot. Glenn Cameron, 1980, is an honorable mention.

Lemar Parrish and Ken Riley are "chalk" for the corner spots and each had a few seasons that would fit.  Ambrose and O'Neal are on the Second-team based on their All-pro honors in those respective seasons. Eric Thomas, 1988, is an honorable mention but he may have been better in 1988 than Ambrose and O'Neal in their "career years". Thomas was a fine, fine player.
The Bengals have had better strong safeties than free safeties, but Nelson was excellent last season. We went with Fulcher over Casanova. But, what are we to do? Fulcher picked off eight passes, was a factor in the run game, and he was a Consensus All-Pro. Casanova was All-Pro, but not consensus. However, from a coverage , you'd want Casanova every time. He was able to play in the box, but was better in coverage, especially Cover-2 where we could take 1/2 of the field. Fulcher couldn't do that. But, either way, both those guys could lay a hit on a receiver.
Ray Horton picked all his passes in games where he didn't start, though he did fill in for Riley and Breedon (who gets an honorable mention for his 1981 season) in 1983, he was a nickel back. Pacman has been a good nickel for a few seasons for the Bengals recently. Dunlap and  get the nickel rusher slots, both were contributors to the success of their team's nickel package. Dunlap gets to double dip because a nickel rushers is a separate position in our format.
As usual, the kickers and punters are based on how they did when they played, not just statistics, so honors are a big part of it. For the returners, touchdown returns and honors carry more weight than just pure average, but the Bengals have been blessed with some good returners.

Special  are usually based on honors, but so far, no Bengals coverage player  so we looked at tackles and blocks and other stats the teams provide.

Agree or disagree? Post in the comments section below
Posted by John Turney at 6:57 PM