When Jack Youngblood arrived in Chicago for the 1971 College All-Star game practices he thought he was in the wrong place. He saw Lyle Alzado, who could "bench press the world" and was 280 pounds. He was already familiar with Grambling's Richard Harris, who he'd seen at the Senior Bowl and Youngblood thought Harris has "Reggie White athleticism". Harris was "270 and could run a 4.6 forty". He, too, was in Chicago.
was Julius Adams, who Youngblood had never heard of before, but he saw a 6-3 260-pound man with amazing natural strength and quickness. At that point, Youngblood, at 242 pounds, felt like "someones kid brother". 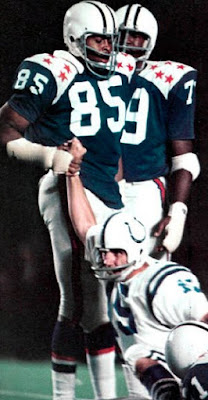 That same Julius Adams passed away on Thursday, March 24, 2016. He was 67 only years old. Adams was among the most beloved New England Patriots and one of the most effective. He was named to the Patriots 1970s All-Decade Team, the 1980s All-Decade Team, the 35th Anniversary Patriot Team and the 50th Anniversary Patriot Team. His outstanding play and leadership  enabled him to win the Jim Lee Hunt Memorial Award, given to the outstanding Patriot lineman, which Adams won in both 1980 and 1982.
The "Jewel" was an All-Rookie selection in 1971, but he rarely achieved post-season honors after that. He was named to the Pro Bowl in 1980 and was named one the NFL's top defensive linemen by Pro Quarterback magazine in 1974 and was All-AFC as chosen by the New York Daily News that same season, but other than that, he was limited to mentions by the AP, UPI, etc. various seasons.

In 1971 he played very well for a rookie, as mentioned making All-Rookie Teams and he was also the AP NFL Defensive Player of the Week for Week 12 in 1971 in an upset win of the Miami Dolphins. Coach John Mazur said "Julius Adams was to the defense what Jim Plunkett was to the offense." Adams was so active, that in fact Mazur mused that Adams could be moved to linebacker (which happened for a very short stint).
Though he played mostly defensive tackle his first few years he also played at defensive end and it was there Adams settled for the bulk of his career. Adams was most effective as a 3-4 defensive end, which the Patriots began using full-time in 1974, though they used it some in 1973. He was stout at the point of attack and had really good athleticism as a pass rusher. In 1974 he forced four fumbles and had 8 sacks to go with 86 tackles and was a major cog in making that scheme work. The Patriots were the first to go to that scheme full-time, though the Dolphins used in 1972 and 1973 and several others. The Oilers used it full-time in mid-season in 1974 after they secured the services of nose tackle Curly Culp.

The 1974 Pats defense helped them to a 6-a start, including upsets of the Miami Dolphins, the Los Angeles Rams, and the Minnesota Vikings in that span. Those teams AVERAGED a 12-2 record in 1973. However, the luster may have worn off as the Patriots ended 7-7. In any event Adams's 1974 season will be at least an honorable mention the  Patriots version of the All Career-Year series PFJ is posting.
He was nicked in 1975 with a foot injury but came back strong the following two seasons. He was out for 13 games in 1978 with a shoulder injury and returned in 1979 to a new role, a designated third down rusher. He and Tony "Mac the Sack" McGee would come in in likely passing downs in the Fritz Shurmur scheme, McGee on the left and Adams on the right. Adams finished with 5½ sacks as part of the Patriot defense that led the NFL with 57 sacks. Adams also led the team with four forced fumbles in 1979, matching his career-high in that category.
The following season, 1980, Adams resumed his starting role and he had a stellar season. He was named to the Pro Bowl and recorded 8½ sacks. Adams his career 1985 and after Super Bowl XX he hung up his cleats.
But the years between 1980 and 1985 were not easy all the time. Adams felt like the Ray Meyer staff that "came in from college" didn't allow him to do things that suited his skills. In 1985 he took particular joy in tutoring Garin Veris, the rookie defensive lineman that was going to get the Patriots sack attack back in the groove and he also was part of the Super Bowl run that took them to Super Bowl XX. 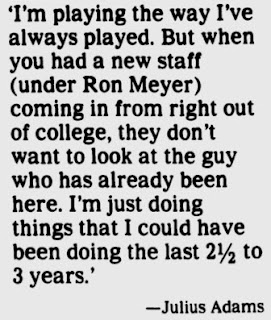 Among the changes was in 1983 when he was asked to to defensive tackle in the Patriots nickel scheme and did so without complaint and responded with 8 sacks, though he always felt he was a better outside rusher. Part of the in that under Meyer was not just the move to tackle in that in the base 3-4 the Patriot ends were asked to "flex" off the ball a half-yard. Most defensive linemen will say they'd prefer to be close to the line, giving them the advantage to get "into" the blocker rather than having to "catch" the block. See below: 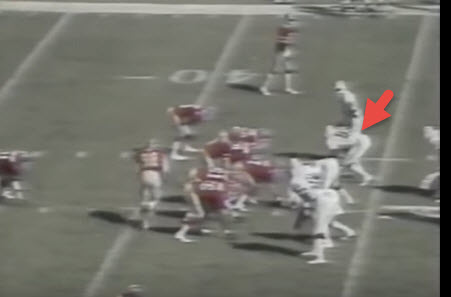 In 1984 Adams became a second-stringer (''Meyer put me on the bench because I didn't play his type of football'').   was fired and Adams became a starter in the final game of the 1984 campaign.

In 1985 he was not the starter at the beginning of , but with Toby Williams injured in Week 5 of the 1985 NFL season he was the starter, all the way through the Super Bowl. As the Big Game got closer he stated: 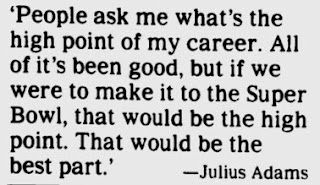 Fair use claim, for education and criticism.
Upon retirement, Adams said:

However, due to injuries to the Patriots defensive line, Adams did what Gino Marchetti in 1966, came back to fill-in for the franchise that meant so much to him (and did so wearing #69 for several weeks until his usual #85 was available). He didn't play much at all, but the official records show he did force a fumble.

So, after that 1987 season Adams was back to Macon, Georgia and his Angus bulls.