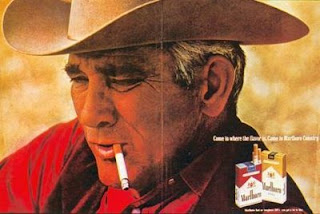 In the early late 1950s and early 1960s Marlboro had a series of television commercials that featured some All-time greats in their home stadiums reminiscing about great games and plays and also enjoying a Marlboro cigarette.

So settle back and enjoy the .

Included in the series Charlie Conerly:


Marlboro also had a few ads that featured their New York Giants salesman, who had off-season jobs as a product rep for Marlboro cigarettes:

And to be fair, we added Frank Gifford in a commercial for Lucky Strikes:

Times have they? Back then football stars were used by the tobacco industry to try and hook people, likely younger fans, to their deadly product.
Posted by John Turney at 10:43 AM