The Worst Trade of All-Time?

LOOKING BACK
By John Turney
Of course, it’s hard to know for sure. One can never know the end from the beginning when it comes to trades and plenty of NFL general managers have made poor trades. It’s the nature of the game and why NFL fans love it so much—the uncertainly of the outcome of things, the plays, the games, the trades, and so on.

Going back to 1963 the Steelers were coming off a good 1962 season in which there were 9-5 and went to the NFL’s Playoff Bowl or “runner-up/loser’s bowl” where they lost to the Detroit Lions.
In 1963 they had to make a change at quarterback.

In May, Bobby Layne retired (according to Paul Zimmerman was forced to retire or face a Hornung/Karras-type suspension for 1963 for similar actions as those two).

However, Steelers coach Buddy Parker had prepared for the eventual retirement of Layne by shipping Rudy Bukich to the Bears for Ed Brown and also a complicated set of picks and conditional picks worthy of a post all its own. 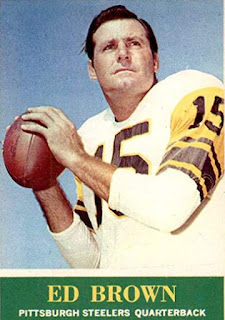 The questionable deal was, however, in July of that same year (1962) Parker sent a 1963 fourth-round pick and a 1964 fourth-round pick to the Bears for 30-year old Harlon Hill, who (due to declining play) the Bears had moved from split end to safety.

In his prime, Hill was a tremendous deep threat but Hill, due to personal reasons, hit his “age-wall” early and by 30 he was really done. Perhaps Parker though he could recharge Hill for another year or two and a pair of fourth-round picks was not that big of a deal in that era. Picks were just not as valuable as they are now so perhaps it was worth the risk.

So, the Steelers, in 1963, were having a decent year (6-3-1 through ten games) but were 1-1-2 the last four games. Tying the eventual World Champs (da Bears) 17-17 was a great effort and losing to the Giants, ditto. But a tie and a loss to the Eagles and Cowboys who ended the season with a combined 6-20-2 record had to hurt, though.

So, the Steelers want to have a good draft, feeling like they were having back-to-back winning seasons and that 1964 will be "their year" to really make a move—to contend for an NFL title.

The Draft
On the first round, they choose Paul Martha, out of Pitt. They didn’t have a second-round pick, having sent that to the Bears as part of the Ed Brown deal, so they must have felt like they needed a pick.

So, we can only speculate they wanted to fill that void by trading for a second-round pick.

Who do they go to? Well, they’ve dealt with the Bears a lot (Bukich, Brown, and Hill). 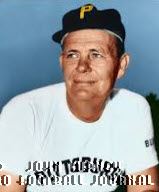 Parker to Halas, "What do you want for your second-round pick, George” 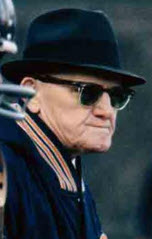 Halas to Parker, "Oh, we need that. We need to build for the future, we're getting old, you know"

Parker, "Well, we’ll make it work your while, George"

Halas, "Well, why don’t I throw in that fourth-rounder of yours that you gave us for Harlon? I always felt bad that he didn’t work out for you."

Parker, "So, we get this upcoming second-rounder and a fourth, and you get our next year’s first? Let me talk to that boys"

(mumbling to the staff—"we’re gonna win the title next year, so that first will be very low, almost a second-rounder anyway and we get the player we need now and a good player on the fourth and lose a pig in the poke next year. Let's do it. Everyone affirms")

"Okay, George you got a deal."

So, the Steelers with the Bears second-rounder, take tight end Jim Kelly out of Notre Dame.

Then in third-round (with their own pick), they drafted Ralph Baker, who they can’t sign and goes to the AFL, and has a fine career with the Jets so he was no help for the Steelers from the 1964 draft. 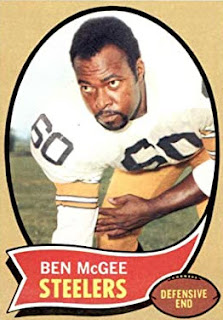 With the 4th rounder they got from the Bears, they take Ben McGee. who has a fine career with the Steelers, but is not game-changer for their franchise.

So the final take on the Steelers end of the trade is Jim Kelly and Ben McGee. Kelly plays six games and blew out a knee, but he was okay for the handful of games he played. However, apparently, the knee was never right again. He was cut in September on 1965 and the Eagles picked him up and put him on their taxi squad in late December he was activated. He missed the 1966 season and then came back for the 1967—his last in the NFL.

McGee was considered a "rookie sensation" in 1964 and a future star, so he was the big prize of the trade. He went to a pair of Pro Bowls in his career and held his job until Dwight White of the Steel Curtain fame took over at right defensive end for the Steelers in 1971.

Back to "what if world" to finish the story:

The pick is in . . . Pete Rozelle steps to the microphone— 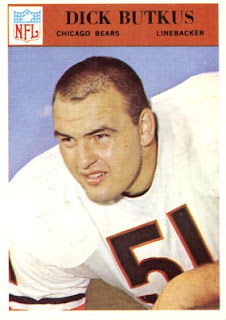