Brandon Staley Did a Heckuva Job in 2020

We posted on this in late November when the Rams defense was showing it was going to sustain its excellent through the season.

Here is the final update. We listed the categories listed by NFLGSIS by rankings and added in defensive passer rating . . . and then added up the rankings to get a total "score"—the ower the better.

We picked the best Rams defenses ever, the ones that featured the Fearsome Foursome and the defenses of the 1970s plus the best of the solid "vanilla defenses" of the 1980s and the two Super Bowl defenses in St. Louis—1999 and 2001 and then added in 2020.

Here are the results with the categories used highlighted—

This was the peak of the George Allen's Fearsome Foursome era, 1968 being the top, though 1967 was the peak run defense. The cumulative ranks of the key defensive categories totaled 29 points in 1968.
The 1968 defense featured the NFL's Defensive Player of the Year Deacon Jones and All-Pros Merlin Olsen and Eddie Meador and Second-team All-Pro Maxie Baughan. The unit scored twice on defense (four times in 1967). 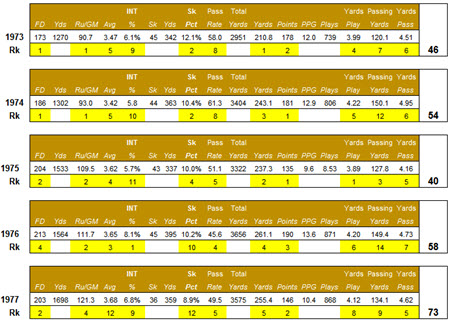 The 1973-77 iteration was the Ray Malavasi years. In that five-year span, they allowed the fewest rushing yards and touchdowns, the fewest points, and yards in the NFL and were second in the NFL in sacks, interceptions, and defensive passer rating and in pick-6s.
In our "inverse rank point system" 1975 was tops with 40—the best of the five-year period but if we went by the entire span if would be much higher since (as you can see from above they were 1st or 2nd is most of the categories
This group still feated Merlin Olsen in his twilight years, Jack Youngblood, Isiah Robertson, Monte Jackson who was All-Pro in 1976 and 1977, Hacksaw Reynolds, and more. It was a tough, hard-hitting unit that did it all, like the late 1960s unit, stopped the run, sacked the quarterback, picked off passes, and kept opponents out of the end zone. 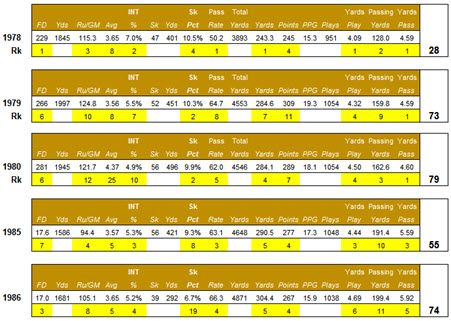 The first three years here—1978-80 are the Bud Carson years and 1985-86 are the best Fritz Shurmur seasons.
In the points system, 1978 is tops with 28. That year they scored seven defensive touchdowns (among the best in team history.
Carson blitzed far more than the 1973-77 units and played much more Cover-2 and Cover-22 (now known as Tampa-2) and really made the most of Nolan Cromwell who Carson called "the best free safety ever". The Rams still had Jack Youngblood rushing from the left edge and Larry Brooks run-stuffing inside but it was moving to a "coverage-type" team rather than a "front" team—relying on more nickel and schemes in the secondary that just relying on superior talent to play man or Cover-3 which they had done for years under Malavasi and have the defensive front put pressure on Qbs when they were in passing situations and make sure they got into 3rd and longs by players great run defense.
In 1985-86 the defense was solid but didn't lead the NFL in anything. It was more of a bend-but-don't-break defense that was very tough versus the run, gave up some yards through the air, but made opponents have long, sustained drives with no mistakes if they wanted to score.
In 1985 they were a bit better than 1986 with a healthy Gary Jeter sacking quarterbacks and also Mike Wilcher finding himself sd a player getting 12.5 sacks and being a nickel linebacker as well. The secondary was the key with Leroy Irvin coming into his own and Gary Green playing well, then getting hurt, and in 1986 Jerry Gray replacing him. The safeties were also excellent, Johnnie Johnson and Nolan Cromwell (both hurt for much of 1984) we back to pre-injury form. Nickel back (part safety part linebacker Vince Newsome was terrific as well.

In 1999 and 2001 the Rams went to Super Bowls, winning it all in 1999 and they had great, great offenses but the defenses were excellent as well. In addition to many high ranks in the key categories in 1999, the defense scored eight times and in 2001 they scored five touchdowns.
In 1999 the Rams ran Bud Carson's scheme of defense but Peter Guinta made the calls but he and John Bunting shared the defensive coordinator title. The 1999 team set Rams marks for rushing defense and sacks. Kevin Carter and Todd Lyght were All-Pros and Grant Wistrom and London Fletcher emerged and Mike Jones, the SAM 'backer made "The Tackle" sealing the Super Bowl win for the Rams.
In 2001 Lovie Smith was the defensive coordinator and he brought in Tony Dungy's "Tampa-2 defense". The Rams traded for Aeneas Williams who played All-Pro corner and provided leadership, London Fletcher, now a star, was terrific as was Grant Wistrom (also a star) and nickelback Dre Bly. The only failure was the Patriots drive in the Super Bowl they led to the game-winning field goal by Adam Vinatieri.
We are not suggesting that the 2020 defense is the best-ever in Ram annals. We are, however, reporting that when the ranks of the given categories are added together, 2020 is the lowest total ever, beating 1978 by one point. They also scored four touchdowns and a safety while, as we mentioned, the 1978 defense scored seven touchdowns defensively. So, it's close.
Also, it is to be noted that this is an era where defenses have a big disadvantage with the rules that favor the offense, which does lend credibility that the Rams defense is "all that".
It stopped the run using a 5-1 look (3-3 nickel personnel), it got after the passer (53 sacks) held opposing passers to an 80.4 passer rating when the league average is 93.6. They allowed 18.5 points a game and even less than that when you take out the pick-sixes and scoop and scores given up by the offense.
Now, the Rams face the Packers and Aaron Rodgers and his top-scoring offense. We will see if they can contest passes the way they have all year and if they can limit the run with the 5-1 (33 nickel) as they have all year and also get pressure on Rodgers and make him uncomfortable. If they can they can upset the Packers in Lambeau. In not, it will be a long, cold day for the Rams.
Posted by John Turney at 1:35 PM