We know that the first facemasks with color in the NFL were in 1974 when the Chargers (yellow) and the Chiefs (white) wore non-grey facemasks as a team. Soon after others teams followed. 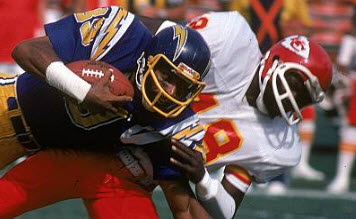 However, in the late-1950s and early 1960s individual players wore masks with color that seemed to not be painted but manufactured that way. We think they are WIlson masks.

Among those who wore them were Johnny Unitas and Rick Casares. Later, it seems the mask Casaras wore was passed down to Billy Wade and perhaps even Ron Smith in the early 1970s, though we cannot be sure.

Here are some shots—

So, while no team wore colored masks until 1974, individuals did and it seems Wilson was the ones who made them. The Part number was likely WI110. First, it was only in white in the early 1950s, but clearly, it was offered in other colors later in the 1950s. Had it been painted it would have chipped like the Riddell RI-210 and RI-220 masks that were painted in the 1970s and 1980s that always peeled.
Examples of peeling Riddell masks— 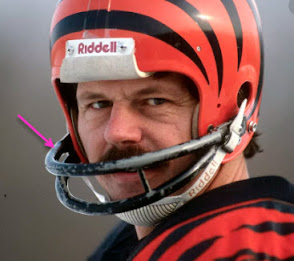 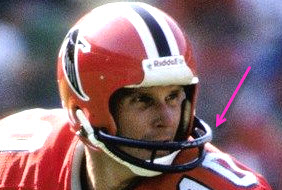 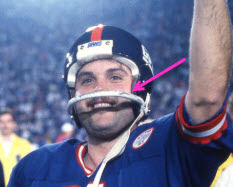 So, we're fairly confident the dark masks of Unitas and Casares and Wade were made that way. Just an interesting piece of uniform history.
John Turney at 10:51 AM
Share