And Now For Something Completely Different: Mays and Mantle 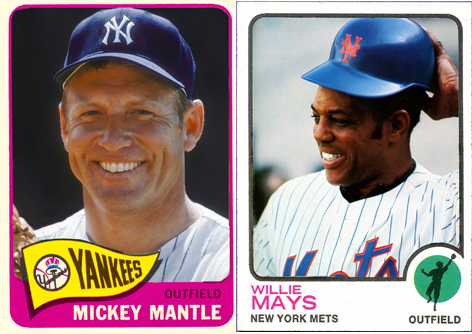 Allen Barra  is an excellent researcher and writer and I really enjoyed his book Mickey and Willie: Mantle and Mays, the Parallel Lives of Baseball's Golden Age. In my view it was well researched and a great read. 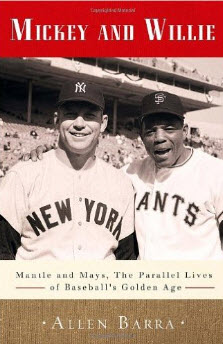 However, being honest, I had one problem with the book. In my view it seemed to have a slight "Mickey Mantle is better bias" and it showed up in two ways. First, the term "Gold Glove" did not appear in the book. Mays won twelve and Mantle . Second, in the two appendices Barra used two baseball metrics that favored Mantle. One was Pete Palmer's player rating (TPR) and the other was Bill James's Win Shares (WS). There are other metrics, such as WAR and versions of it that are not so clear cut.

Thus, I've searched the Web and found all the metrics and put them into one chart so folks can take a look and make their own determination as to may have been better (if anyone really was).

Here are the various WAR with TPR and WS in a chart.
( to enlarge) 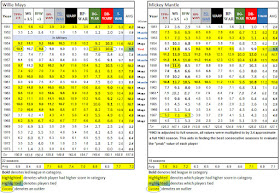 With Plamer's total player rating, I added 2.5 to both to make the totals more similar to the WAR numbers, it could also be called TPR above average with 2.5 being average. I did the same for both players so this will still favor Mantle. Most analysis of the AL and NL in that era rated the average player higher in the NL than the Al due to better integration of the NL but I ignored that for TPR. Had a good analysis of what the average player in each league was, the 2.5 number I chose would be different. Perhaps 2.5 for NL and 2.2 AL, for example.

With Bill James's Win Shares I divided it by 3.5 to make it come out to about the same as others so it would be weighted more evenly. Again, it still favors Mantle.

I also adjusted Mickey Mantle's 1963  a full season, which helps him in the graphs down below, the 3-year, 4-year averages, etc.

You can click on to go to source for charts.