Both Sides of the Shane Lechler Hall of Fame Debate 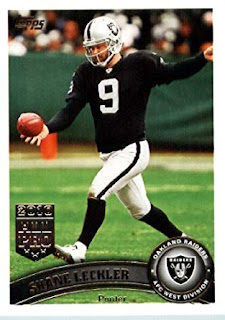 On the Talk of Famer Network website Hall of Fame voter Clark Judge wrote that recently retired punter Shane Lechler will have a tougher time getting into the Hall of Fame than his supporters may realize.

Today Houston Chronicle writer John McClain (also a very respected Hall of Famer voter) made his case of why Lechler belongs in the Hall of Fame.

Judge presented the statistical case that Lechler's gross average was one of best-ever but his other statistics like net punting and touchback to inside the 20 ratios and others were not stellar.

McClain focused on the many times Lechler was an All-Pro (seven, six consensus) and twice more a Second-team All-Pro. McClain mentioned that Gil Brandt called Lechler the ""greatest punter of all time." We would add to that testimonial the comment of Bill Belichick who called Lechler "one of the all-time great punters". Judge's article mentioned J.J. Watt saying Lechler “the greatest punter to ever walk the earth,” and former All-Pro punter Pat McAfee predicted he’d be “a first-ballot Hall of Famer.” Rich Gannon on twitter added his kudos, "Shane Lechler is probably the best punter in NFL history.".

Judge didn't say Lechler wasn't a Hall of Famer, he was making the case that Ray Guy was the best NFL punter ever, not Lechler as Watt asserted.

So, who is right? And what to modern metrics tell us about Lechler's career?

So, what makes the difference in the gross punt and the net? Return yards is one thing, touchbacks are another and blocked punt a third thing. The two major factors are the return yards and the touchbacks.

Lechler allowed a lot of return yards, 11.2 yards per return, in fact, 2.1 yards above the NFL average during his career. A pretty big negative.

His touchback percentage was 12.3% while the NFL average during his time was 8.3%. He was 4% lower than the average. And that, by and large accounts for the 8.5 difference in his gross and net.

For a comparison Rams punter Johnny Hekker has a touchback percentage of 4.8%, which is better than the NFL average for his career. And his difference in gross and net punting average is 3.5 yards, five yards better than Lechler's 8.5.
(click to enlarge chart)

This explains how out of the top 50 net punting performances ever, Lechler only has one, which is an excellent 7th All-time (we have included pre-1976 seasons so the highlighted players are unofficial) 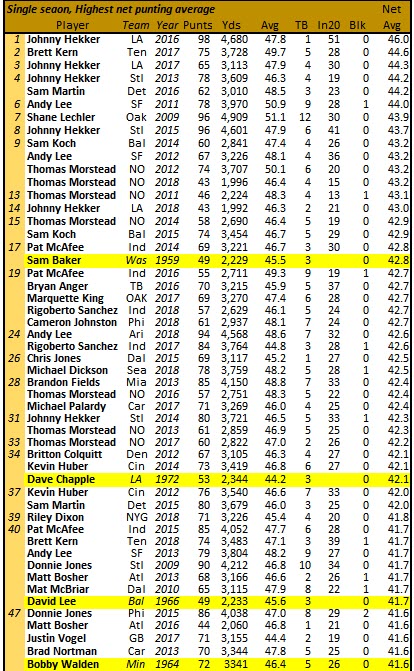 McClain also went heavy on the gross punting prowess of Lechler, "If you count Baugh's 1940 performance, Lechler has two of the top four season averages in league history and four of the top 13".  Yes, that is true, but as mentioned above even with being at the top in gross all those times, only one of the top 50 performances in net punting belongs to Lechler.

Now, as can be seen, Lechler had some good net punting seasons but he also had some far outside the top ten and some in the twenties. That is something that didn't happen in Guy's (or Hekker's) career. 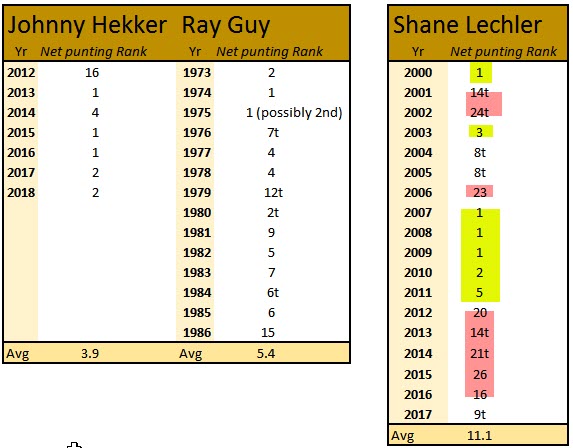 We are fully aware that not all the return yards are always on the punter outkicking coverage or that a blocked punt is the punter's fault in all cases. Punting is a team activity and it takes a good snap, protection, punt, and coverage for the play to be successful. But we have found that the top punters, over time seem to have the lower return yards and fewer super negative plays like a block or a touchdown return.

One Twitter user felt that the seven top-five finishes were a great thing, and we agree—to a degree. But when you account for his career being 18 seasons it looks more like this: 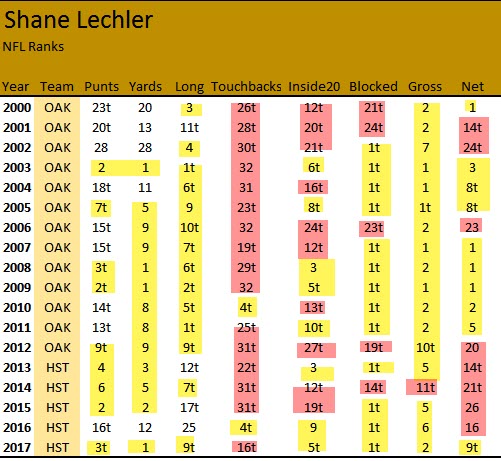 Now if those who are bigger supporters of Lechler want to explain the kind of up-and-down shown here or the issue with punt returns please let us know. But understand we are not being partisan, not a pro- or anti-Raider or Texan. We've just taken an interest in this subject and care about the situations of punting not just the gross average. 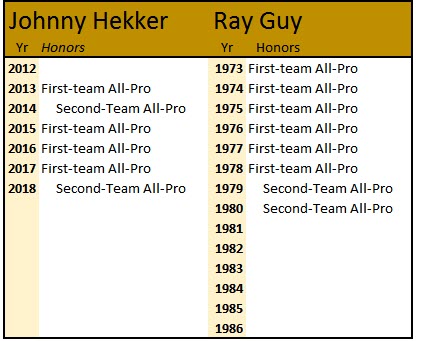 And here are Lechler's honors, which are excellent and are the strongest point in making a case for Lechler and the Hall of Fame: 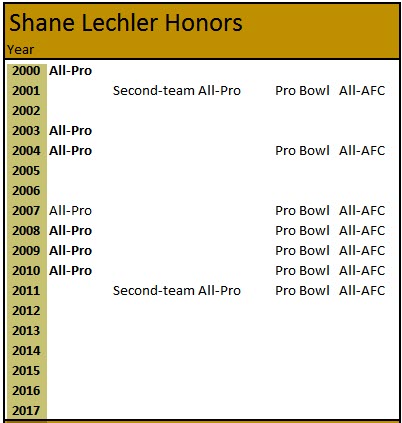 So, the only analysis we lack is an examination of if Lechler deserved all of his All-Pro seasons. Well, it's subjective because you have to decide what kind of punter you want. One with the hang time and the good net punting and that avoids excessive return yards and blocked punts.

When one reviews Sports Illustrated writer Paul Zimmerman's All-Pro teams you won't find Lechler's name a lot. Dr. Z would say, "Punts into the end zone are big negatives, to my way of thinking." Lechler was Zim's All-Pro punter in 2007, the last year he was able to pick his team for SI. Zimmerman liked, as a statistic, lowest number of punts returned and Lechler was never high in that and when punts were returned, as we mentioned they averaged 11.2 yards per return over his career.

When Zimmerman picked his All-time NFL team he picked Tommy Davis for a variety of reasons. He also explained why he didn't like Lechler (or Ray Guy)—

Davis was second in gross yardage, punting in the worst conditions in football. Then Shane Lechler came along and forged to the lead with his 46.1 average. Nope, Shane doesn’t do it for me. A middle-of-the-end-zone punter. Before they started calculating net yardage, it was a hidden statistic. Then finally bowing to the insistence of ex-Giants and Jets punter Dave Jennings, net started being counted, and the guys who couldn’t place the ball were exposed.

Lechler led the NFL by three yards on gross average in 2006, but he was 12th in net, which means that either, 1) he couldn’t keep the ball out of the end zone, which was true (19 touchbacks, high in the league and nearly double those of his nearest pursuer), or 2) the punt coverage team was crummy. But he’ll probably make the Hall of Fame someday if he keeps his gross up there. Ray Guy, a middle-of-the-end-zone punter with a lofty hang time, keeps coming up at the enshrinement meetings. Why I don’t know. His career gross average is lower than that of anyone in the game today.

Our review of that era shows that Guy was not a middle of the end zone punter, but often, while going for the corner, missed and got a touchback. He wasn't going for inside the 20, he was going for inside the ten. Also, the NFL opened up the punt return game in 1974, making it much more difficult to cover punts with only the gunners allowed to go downfield. Prior to that all the players on the punt team could go into coverage at the snap. As a result, the NFL net punting average dropped from around 36 from 1969-73 to about 31.7 from 1974-78. Guy was always very high in net punting, but it does not look as impressive and pre-1974 and post-1990s due to the era.

Our review came up with 2000-18 All-Pro selections similar, but not the same as Zimmerman. Going by avoiding super negatives and good net and few returns allowed, etc., we felt that a case could be made for Lechler being the top punter in the NFL in 2008, 2009, and 2010 but Mike Scifres and Sam Koch supporters could also make that claim for 2008 and Donnie Jones, Andy Lee and Ben Graham could make that claim in 2009 as well. For 2010 there were a few punters near the top in the key metrics and Lechler was in that mix. Other than those three years, there were clearly more effective punters, all things statistically considered.

The bottom line is Lechler will make the Hall of Fame on the strength of his All-Pro selections (even if most are questionable) and the testimonials of Belichick and others who will tout his deep kicking and powerful leg. And we have no problem with that, but in our view when it comes to the best punters—the ones that stood above the rest of the pack, year-in and year-out in terms of net yardage, avoiding returns and especially touchdowns and avoiding blocked punts while getting good hang time Lechler will not be on that list.

In our view the transcendent punters (a tier one) for their era are: Horace Gillom, Sam Baker, likely Bobby Joe Green (but we are waiting on more data, but if the preliminary stat we have holds, he will be one of the best-ever), probably Tommy Davis, Ray Guy, Reggie Roby, probably Rich Camarillo, maybe Matt Turk, possibly Thomas Morstead and definitely Johnny Hekker (Bill Belichick calls both 'weapons').

There would be the next tier with plenty of others that were very good and Lechler would be among them in our view. Andy Lee, Jerrel Wilson (12 blocked punts, yikes!), Dave Jennings, et al. We reserve the right to review these picks as more data comes in. We've seen all of them punt, but unless you focus on each punt in a game, they often look the same. What you notice is a great punt that pins someone back or a blocked punt or a big return, the 'splash' plays. We don't do what Zimmerman did and put a stopwatch on the punters in every game, we're not that dedicated.

So, while we did put Lechler on our 2005-2015 Mid All-Decade team we would look at it closer and would likely have made a different choice, but we went by the All-Pros more than anything. And therefore we were guilty of not doing our homework, the thing we are criticising the All-Pro voters here of doing. However, to be fair, it's not a terrible pick, either. And therein is the issue. If there are enough questions about a player's resume it likely means they are not among the 'elite' at their position, not a "tier one" punter, as it were.
John Turney at 6:43 PM
Share