1958 Defensive Players of the Week: Contending Teams Carried by Defense

Every year on the 4th of July my day begins with my annual viewing of "Gettysburg". Though their are many excellent performances in the 271-minute film; Jeff Daniels as Joshua Lawrence Chamberlain stands out—so with the Rebels coming up the hill again at Little Round Top we hear Colonel Chamberlain exhort his men with "BAYONETS" as the 20th Maine charge down the hill. Chamberlain would have made an excellent defensive coordinator and so we begin the narrative of the Defensive Players of the Week for '58. 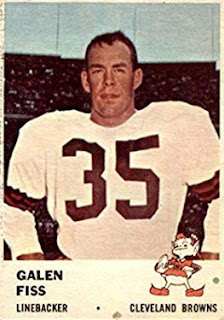 September 28th: The Browns are down 27-14 on the road in the Coliseum before the 4th quarter rally in the 30-27 victory over the Rams as left linebacker Galen Fiss records 2 sacks and a fumble recovery. Cleveland is convinced they can return to the title game. 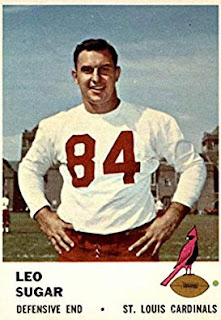 October 4th: Though Ed Henke of San Francisco has a sterling performance, just cannot award defensive players of the week to a player who is on the short end of the pounding the 49ers take from the Rams; thus Player of the Week honors goes to Leo Sugar of the Cardinals. The veteran left defensive end recovers two fumbles and leads the charge into the Redskin pass pocket in Chicago's 37-10 home Saturday night victory over Washington. 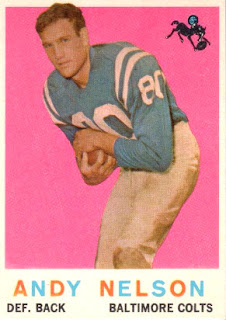 October 12th: Second-year left safety Andy Nelson is again playing alert football for the Colts, and makes the key play of the game in Milwaukee. Tied at 17 in the 4th quarter Bart Starr throws over the middle to fullback Howie Ferguson on a circle route. The errant pass is pilfered by Andy and as Jim Leaming calls on the highlight film—his "zig-zag gallop" for 52 yards wins the game for undefeated Baltimore. 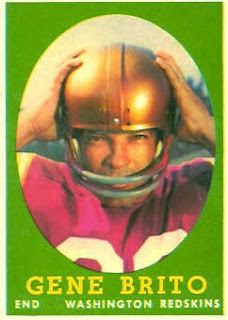 October 19th: Watching the fascinating film of the Redskins unbalanced line ground assault of the Packer defense is no doubt the main subject in the Washington 37-21 win over Green Bay. Left defensive end Gene Brito continues to play strong football with two sacks, and outstanding run pursuit in leading the Washington defense. 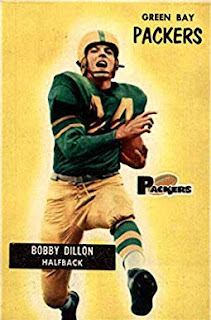 October 26th: By far the most difficult week to pick just one player, so we have a trio of outstanding defensive performances. Bobby Dan Dillon is still the ranking ballhawk in the league during this era, and the right safety continues ranging far and wide to play pass defense. The Eagles first possession of the 3rd quarter, and the lean one-eyed Texan nabs a Van Brocklin aerial which sets up a touchdown pass from Parilli to Carmichael.

Philadelphia is attempting to rally, but Dillon in the 4th quarter on a 1st and 10 play intercepts at his own twenty-nine yard line to stop the Eagle drive before it ever gets started. Green Bay wins 38-35 for their only victory of the season. Dillon now has 49 interceptions in his legendary career. The defending champion Lions are 0-3-1 and on the road in the Coliseum. 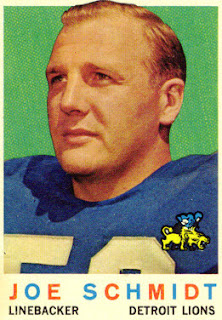 Joe Schmidt has built a reputation as a run-stopping machine in his career, and today the Rams gain just 48 yards on the ground, but the key to the Lions 41-24 victory is Schmidt on pass defense as he steals 3 Los Angeles passes for 46 yards. 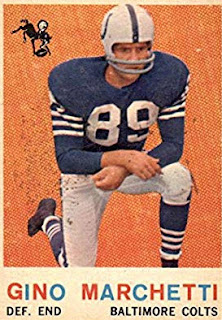 Finally, the third member of our tri-Defensive Players of the Week is Gino Marchetti of the Colts. The Redskin unbalanced line creates running lanes for the Washington runners as they take the lead 7-0. Washington will not score another touchdown as Marchetti continually sheds attempted blocks by Redskin lineman whether they are in unbalanced or not, and ravages the pass pocket as Baltimore stays undefeated with a 35-10 win. 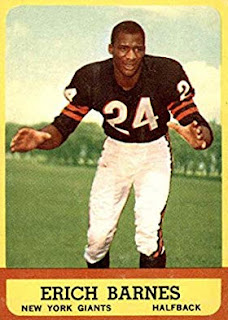 November 2nd: Rookie corner Erich Barnes zips in front of a Bill Wade pass in the first quarter and returns the ball 20 yards to put Chicago ahead. Jon Arnett has a game for the ages with 298 all purpose yards, and more than once is brought down in the open field by the hustling Bear corner. Barnes is in the midst of tying a team record by intercepting in four consecutive games(record still stands), but the Rams win the all-important contest 41-35. 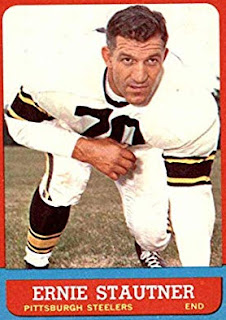 Erich is joined as co-Defensive Player of the Week by Ernie Stautner of Pittsburgh. The tough Steeler lineman stonewalls the run to his side, and records two sacks in the 24-16 victory over Washington. Pittsburgh has begun their climb to contention with Cleveland and New York led by the future hall of fame lineman. 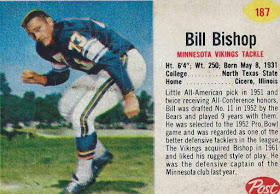 November 9th: Right defensive tackle Bill Bishop is in his seventh year (earned a Pro Bowl berth as a rookie in '52), and has played solid football in his career. Today though is the best game of his career. He records a 1st quarter sack, plays the run tough (Packers gain just 52 on the ground), and twice recovers Green Bay fumbles. The most important is in the 3rd quarter when Bart Starr drops back to pass against the Shaughnessy five-man line. 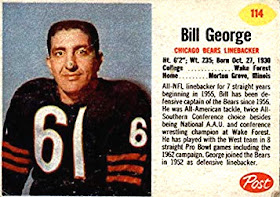 Middle guard Bill George easily defeats Hank Bullough's block and knocks the ball loose from Starr. Bishop pounces on the ball in the end zone as the Bears build a 24-3 lead over the Packers (Chicago wins 24-10). With the victory Chicago has set up the showdown in Wrigley Field with the Colts. 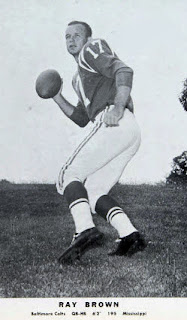 November 16th: Bert Rechichar started at right safety for five years in Baltimore, but has lost his job to Ray Brown. The rookie earns defensive player of the week as he intercepts twice, and recovers a Chicago fumble in the 17-0 shutout of the Bears. The details are on pages 284 & 285 of my book The Birth of the Modern 4-3 Defense, so if interested purchase a copy. 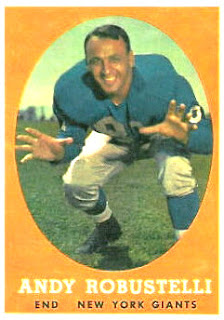 November 23rd. Consistently among the league leaders in sacks during his career; right defensive end Andy Robustelli garners two today in the 30-0 whitewash of Washington. The Giants remain in the race with Cleveland and Pittsburgh at 6-3. 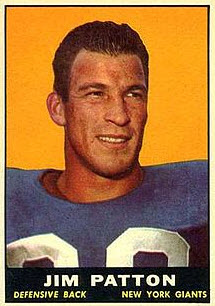 November 30th: Another New York Giant as defensive player of the week? You betcha.....as right safety Jimmy Patton steals his 9th pass of the year in the 24-10 win over the Eagles. 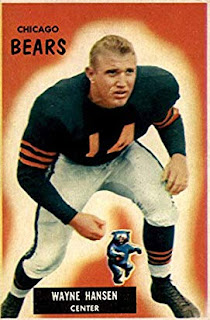 December 7th: Rookie Chuck Howley started most of the year at left linebacker for the Bears, but down the stretch veteran Wayne Hansen takes over. Today he ranges all over the field for the Bears as he intercepts and returns the ball 12 yards, picks up a Cardinal fumble and rumbles 16 yards as Chicago builds a 30-0 lead. The Cardinals gained just 50 yards rushing against the number defense in the league, yet trail the Colts in the standings. 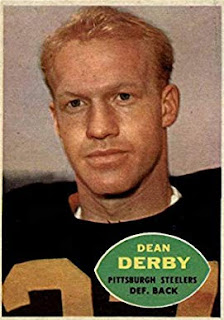 December 13th: Forbes field is the site of Bobby Layne's greatest passing performance as he continually shredded the Chicago Cardinal defense, yet someone has to play defense for the black & gold? Second-year man Dean Derby has played both left corner and left safety during the campaign, and is now entrenched as a starter late in the season. Derby intercepts three times and recovers a fumble in the 38-21 win. 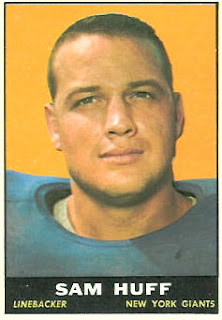 ****BONUS: December 21st: Cleveland and New York tied atop of the eastern conference, thus a playoff. The Giants have beaten the Browns both times they have played earlier in the year, and face the daunting task of trying to stop Jim Brown. Who is defensive player of the week in the 10-0 win by New York? Almost impossible to list just one man since the front seven led by Sam Huff limits Brown to 8 yards rushing on 7 carries.
TJ Troup at 9:01 AM
Share