The Grandaddy of All Trade Strings

LOOKING BACK
By John Turney
The grandaddy of them all—the "big" trade string. This one is more complicated than the previous two we've posted about. It involves a bit more of an investment in original picks, but the payoff is also higher.

So, let's get going.

In the 19th round of the 1951 NFL Draft, the Los Angles Rams drafted a small (6-1, 220) end out of Arnold College named Andy Robustelli. He was a fine defensive end for the Rams. He played for them for five seasons (twice All-Pro, twice Second-team) and then wanted to retire. He'd tired of being away from the East coast. So, to send him closer to home and engineered a trade to the New York Giants and Robustelli brought in a 1957 first-round pick—Del Shofner.
Now, let's go back to 1952 when the Rams finally got their chance at the bonus pick—a rotating extra first-round pick that was drawn from a hat, and then the teams that got it were eliminated. thus, in 1952 it was the Rams turn. With that pick, they took quarterback Billy Wade.

As can be imagined, Norm Van Brocklin was not pleased with Wade's presence (which due to military service didn't happen until 1954) and it eventually led to Van Brocklin's departure to the Eagles. Wade took over as the full-time Rams quarterback in 1958 but by 1960 he was sharing time with Frank Ryan.

Wade, like Van Brocklin, was not happy about having to share the quarterback position. Actually, it was the same with Bob Waterfield who was still in his prime when Norm Van Brocklin showed up on the scene in 1949. This, as most NFL fans know, is a Rams theme—quarterback controversies.

When Wade took his complaints with the media the Rams made him part of a three-way trade that sent him to the Bears, Erich Barnes to the Giants, and brought the Rams a first-round pick, a sixth-round pick, Lindon Crow and quarterback Zeke Bratkowski. 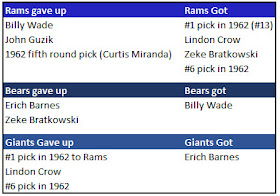 Back to Shofner was a player with great speed who had played defensive back as a rookie then was a fine end in his second and third seasons averaging 48 catches, 1016 yards, a 20.7 average, and 8 TDs in those two years. Then in 1960, he played more defensive back and less receiver.

When the Giants inquired about Shofner, when the Rams offered him for trade was "what's wrong with him". The word was, according to Rams general manager Elroy Hirsch "the boys kind of lost confidence in Shofner, he had a couple of drops in a couple of games". Tom Fears was the receivers coach and Bob Waterfield was the head coach so maybe the "boys" Hirsch.
Late in the preseason in 1961, the Giants agreed to a trade for Shofner. They were to send the Vikings first-round pick to the Rams and the Rams would send Shofner and a "frontline" player to be named later—presumably a halfback.

As the 1962 draft drew closer (in December 1961) the Giants and Rams couldn't agree on that halfback. One very reliable Ram source suggested it would be a defensive halfback (he didn't name him) but the Giants were pretty well-stocked at corner and even safety. They were relatively weak at offensive halfback and the Rams had some fine young ones. However, the report we saw came from a writer who nailed most of the Rams draft picks that year.

So, using some speculation the "frontline" halfbacks could have been Jon Arnett or Dick Bass (both former first-round picks) or perhaps Eddie Meador, though again, the Giants didn't need him, but he was an excellent player who would have been highly valued. The Rams perhaps wanted to send someone like Alvin Hall and young player but he didn't have the draft pedigree of the aforementioned players.

Be that as it may, the Rams and Giants could not agree and Pete Rozelle stepped in and forced a final completion of the trade the day before the draft. It was decided that The Rams (who technically owned both the number one picks, the Giants and the Vikings, but owed the Giants a "frontline player") would not send a player to the Giants, but would only keep the Vikings pick and the giants would keep their own pick later in the round.

Ironically Arnett had leg injuries in 1962 and 1963 and was shipped to the Bears in 1964 to replace Willie Gallimore who had passed away in a car crash. Essentially, the Rams paid a first-round pick to keep Arnett or Bass or Meader. bass and Meader had a lot left and Arnett didn't, though there was no way for the Ram to know that at the time.

So, were at the 1962 NFL draft and the Rams have the number one overall pick and they take Roman Gabriel. We'll get to him later.

The Rams got 2½ years of poor play from Zeke Bratkowski (3-21 starting record 20-25 TD-INT ratio) and he was waived late in the 1963 season and quickly signed by the Packers. But was he cut or traded?

There was a lot of funny business in the deal. Bart Starr was hurt and the Packers needed a reliable backup for insurance and after the season Ken Iman told the media, "It was an open secret that one of us (Packers) was coming to Los Angeles. The de facto "player to be named later" was Iman.

So, add that to the total. Iman, after missing a season with a broken ankle was a Rams starting center for ten seasons. (Iman, in 1975, was traded to the Cardinals for a conditional pick, but he failed a physical so the pick was never exercised.)

We have yet to find the 1962 sixth-rounder the Rams were supposed to have received in the three-way deal. records are hard to find for later round picks, so it could have been traded away but we will keep looking. So, there could be a bit more "value" yet to be uncovered.

So,  through Gabriel, the original 19th rounder, the first-round bonus pick, a 4th, and a 5th round pick netted the Rams 46½ seasons. Robustelli, Shofner, and Gabriel made All-Pro at least once.
Now comes the famous 1973 Gabriel trade to the Philadelphia Eagles. After John Hadl was traded to the Rams Gabriel was unhappy and demanded a trade. The new head coach of the Eagles Mike McCormack though Gabriel had enough left to pay a very steep price.

So, the original haul for Gabe was 26 extra years. But that was not all. We have to see what those players brought in terms of residuals.

Tony Baker was traded in 1976 for Carl Ekern. Baker had been a terrific short-yardage back in 1973 and 1974 and got offered a fifth round pick so they took it, likely figuring they had a fine stable of fullbacks having recently converted Cullen Bryant to running back and just having drafted Cappelletti.
Harold Jackson was traded to the Patriots in 1978 for a 3rd and 4th round picks after five Pro Bowl-type seasons for the Rams. Here it gets complicated but using the current draft trade value chart we think we've done the due diligence to parse out how the picks were used, well, close enough for rock and roll, anyway.

The fourth-round pick for Jackson and a third-round pick (acquired in exchange for Dan Nugent) were paired together in a complicated trade with the 49ers for Charle Young that brought the Rams Jewerl Thomas. Young brought a third, but that was not part of the trade string in our view. (And that third was paired with a pick the Rams got for Bill Simpson and it brought them Gary Jeter if one wished to include it, we won't.)

Thomas had a couple of big games late in 1980 then did little else and was eventually traded for cornerback Eric Harris. Harris was a key role player in 1983 and 1984 when the Rams suffered injuries, so he came in handy.

So, Jackson's part was one year of Thomas and about ½ of Barry Redden because the third round was part of a trade that was sent to the Washington that got the Rams a first-round pick in 1982. We think Nugent's part of the Redden deal is about two seasons.

We mentioned Dan Nugent, the Rams got the third-rounder we mentioned, but they also got a second-rounder in 1980 and with that, they chose Irv Pankey. Pankey was a stalwart for the Rams in the 1980s, taking over for Doug France.

So Nugent got netted the Rams 605 draft trade value points (2nd and a 3rd) in today's parlance. A late-1st round pick.

As a sidebar, it seems the Rams sure took advantage of George Allen in a couple of trades involving offensive linemen. A second- and third for Nugent who was a third-round pick.

Then there was the Tim Stokes deal, which again, using the current DVC as a guide netted the Rams first-round value. Allen sent a 2nd, 3rd, 4th, and 5th to the Rams for Stokes and a 6th and 8th making the value for Stokes around a 23rd overall. Stokes, like Nugent, was originally a third-round pick.

To say George Allen didn't value picks was always an understatement but giving that kind of value (2nd and 3rd rounders) for players who were originally 3rd rounders and hadn't proven anything in the NFL is pushing it, even for Allen.

Back from the sidebar.

The Rams got one of the 5ths from the Packers for Mike Wellman, and the Rams got Wellman for the pick they got for Harold Jackson. The #3 they got in the Bob Brudzinski deal, which is not part of the Gabriel trade string in our view.
However, the second-round pick that went to Washington is part of the Gabriel deal. The Rams got it from the Chargers for John Cappelletti. Using our formula we estimate that Cappelletti contributes to three years of Redden's career.

We told you this is complicated.

The Rams got five years of service (as a backup to Eric Dickerson) out of Redden but since he was a strong, fast rinning back with little wear and tear he had trade value.
So the Rams shipped him South on  I-5 to San Diego and got a 1988 second-round pick and a 1989 sixth-round pick. The sixth-rounder was Thom Kaumeyer who didn't contribute to the Rams but did play as a special teamer for the Seahawks for a could of seasons. But the second-rounder was Flipper Anderson who was a huge "get" for the Rams.

He was a terrific deep threat for the Rams for several years and many Rams fans will always remember him as the one who scored a touchdown in overtime to beat the Giants in the 1989 playoffs.

Flipper Anderson (7 years)
The tally for the residual of the Gabriel "haul" is about 42 years, including injured reserve seasons.

Again, for the price of—
the original 19th rounder,
the first-round bonus pick,
A 4th (Guzik)
A 5th round pick

And the lowly 1951 pick from Arnold college took the Rams into the early 1990s with Marc Boutte.
John Turney at 8:26 PM
Share