Is Antonio Brown a Hall of Famer? 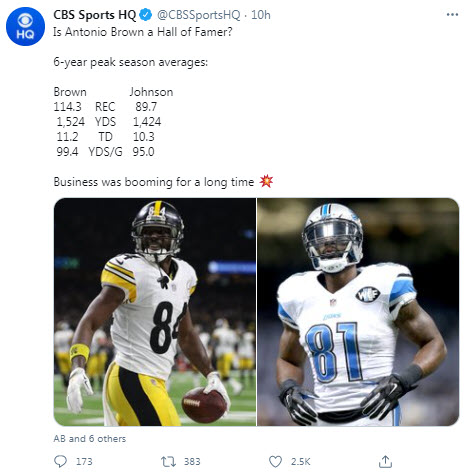 Twitter used to be fun, now can still be fun, but more often than not it's ugly. However, there is a topic that was trending this morning. A tweet by CBS Sports HQ (CBS) that had 2.6K likes and a lot of replies and re-Tweets etc.

CBS compared Antonio Brown to Calvin Johnson who was recently voted into the Hall of fame in his first year of eligibility.

It's a fair question because in the Pro Football Hall of Fame bylaws off-the-field issues are not to be considered (though they often are) and Brown has had plenty of those.

A while back we did a profile of the top receivers and listed their stats, honors, how many times they led NFL (black ink) or were top ten (grey ink) in a major category, and so on. We've updated that to include what Brown has done since then. 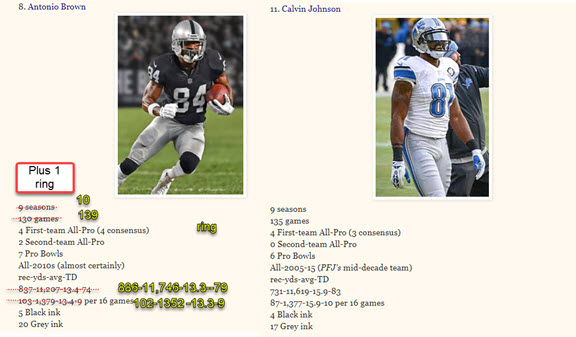 Brown has added a ring and some numbers but even before his troubles became publicized his honors exceeded those of Megatron's. He was a four-time consensus All-Pro (three for Johnson) though Johnson has one more First-team selection so he was a four-time First-team All-pro, three consensus. Then add in Brown's two Second-team All-Pro selections and that shows he was "above the first line" six times. Brown has seven Pro Bowls to six for Johnson...one more 'above the second-line" if you will.

Then consider this:  To this day only Jerry Rice has collected more AP Offensive Player of the Year Award votes than Antonio Brown. Now, Rice won the award twice and Michale Thomas won it last year, the only receivers to win it but Brown got more consideration than others getting five or more votes in three separate seasons. That's a tall order for a wide receiver. Just ask Calvin Johnson who got two votes in his entire career. 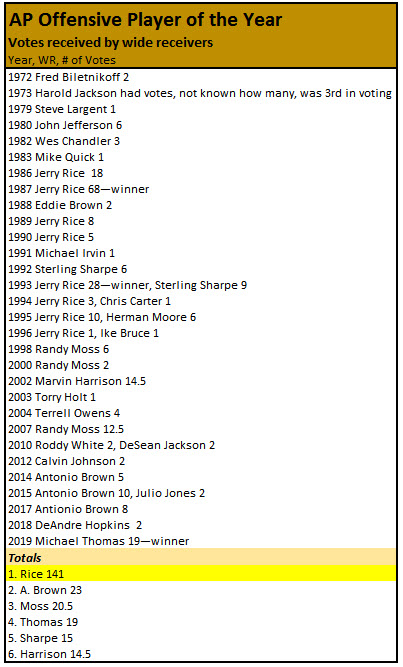 Shazier added that he can usually tell when a receiver is going to make his break but that "But AB is not normal. AB is an alien. His breakdown is so smooth and so quick that it’s basically just one hard plant and boom — he’s changing direction at full speed."

Richard Sherman said, "Antonio Brown is creative with his speed. He’s deceptive. He uses his acceleration and deceleration very uniquely. That’s what allows him to get so open."

When naming the top wide receiver he's faced Chris Harris, Jr., "AB is the best pure route runner in the league. He runs so many different routes with precision, but . . . it’s the unpredictable ways Pittsburgh uses him that makes him so difficult to defend. . . AB’s body control in the air is second to none." All-Pro cornerback Jalen Ramsey added this, "Probably one of the top three, if not the best receiver that I’ve played in my career."

So, is Brown a Hall of Famer? Well, that's a technical answer because we have to wait and see what happens when he is eligible. But we can ask the question this way—Are his numbers equal to or greater than Calvin Johnson? Yes. Are his "honors" greater than Johnson? Yes. Does he have a ring? Yes.

And add the testimonials and he has more credentials than many. And if he can keep his off-field issues under containment and changes his ways he can add to his numbers and honors but as of now he checks all the boxes except, really, longevity, and recently not everyone checks that box, just as Calvin Johnson and it didn't hurt him in terms of the Hall of Fame.