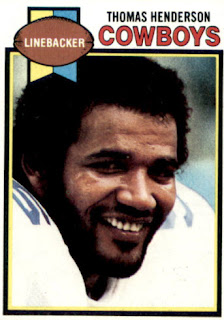 Thomas "Hollywood" Henderson was about as flamboyant a linebacker as you could find back in the day. And of the linebackers, we've profiled in the past couple of days he was the best, but like them, he was not able to have a lengthy career.
Henderson began as a walk-on at Langston University, a historically Black university in the National Association of Intercollegiate Athletics, Henderson was a first-round draft pick by the Dallas Cowboys in 1975, the second of two first-rounders Dallas had that year (the other was Randy White). Henderson had been a stand-up end at Lanston and was a small college All-American there.
What made him stand out was his speed, around 4.5 for the 40. And though he was undersized, 6-2, 220, the Cowboys thought he could develop into a fine linebacker. They were right.
He was a great special teams player, in fact, PFJ named him the retroactive NFL Special Teams Player of the Year for 1975 since there were no awards for that at the time like there were later. Henderson was the R1 on kickoff coverage for Dallas, could return kicks (and dunk them over the goalpost), and block punts and kicks. He got one in both 1975 and 1986 (and blocked a PAT in 1979 as well).
In 1976 he moved to a specialized role as a nickel linebacker for Dallas and started to show what his speed could do in coverage. In limited snaps, he had 2.5 sacks and defended 10 passes, decent numbers for a fill-time linebacker, much less a role player. 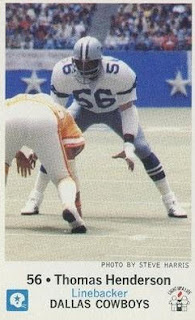 In 1977 he won the starting strong-side linebacker position for the Cowboys and was one of the young stars that helped Dallas dominate the NFL in 1977, winning Super Bowl XII handily over Denver. He was all over the field, covering tight ends, backs and doing so with eye-popping hits. That season he totaled 75 tackles, picked off a trio of passes, defended five more, recovered a pair of fumbles, and was in on two sacks. For his efforts, he was voted Second-team All-NFC.
Henderson also began to let his personality out more and more. In 1978 he was hobbled early with an ankle injury but rebounded later and was named to his first Pro Bowl. He taunted the Rams before the NFCCG by saying the Rams "didn't have enough class" to be in the Super Bowl. He backed it up by scoring a touchdown on a pick-six to seal the game (with a finger roll voe the crossbar)

Then, in the week In the days prior to Super Bowl XIII Miami, Henderson told the media that Steelers quarterback Terry Bradshaw “couldn’t spell cat if you spotted him the ‘c’ and the ‘a’.”

However, his drug use was out of control (the title of Henderson's first biography). While he'd been high in Super Bowl X but snorting cocaine in a bathroom stall before the game in Super Bowl XIII he used coke during the game.

He had filled it with a vicious mixture of cocaine and water and put it into a small nasal spray bottle and put it in the front of his game pants, in the belt loop opening.

The following season of 1979 Dallas began to use Henderson more on blitzes and he had six sacks in eleven games and was seemingly on his way to another Pro Bowl. But after a zero-tackle, zero-sack game versus Washington that ended in a 34-20 Dallas loss Henderson was seen clowning on in front of a TV camera showing a handkerchief that teammate Preston Pearson asked him to promote.

This incensed his coach Tom Landry and placed Henderson on the reserve-retired list and Hollywood never played for Dallas again.

After essentially being fired by Tom Landry he was traded to the 49ers for a fourth-round draft pick. There he was unable to kick a growing drug habit and also battled injuries in camp. He missed so many practices teammates began calling him "Holiday" Henderson.

A couple of weeks into the 1980 season Bill Walsh had seen enough and released Henderson. Walsh through a media spokesman told the media "Henderson did not live up to our expectations".

However, Henderson did catch a break, Bum Phillips, the Oilers head coach was willing to give him a shot and he signed with the Oilers and he did play some, in special defensive packages but also missed time with more nicks and bruises. He made 19 tackles recorded a sack and pick and forced two fumbles in limited snaps with the Oilers.

In 1981 Don Shula was willing to give Hollywood a chance. This time, Henderson had completed drug rehab and had a positive attitude and work ethic in 1981 Dolphin camp. Shula told the media he planned to use Henderson as a strong-side linebacker, moving Kim Bokamper to more of a permanent defensive line spot and also used some of Henderson's special teams magic that he showed in Dallas.

"Maybe he can do for us what he did for Dallas", Shula said.

However in preseason Henderson broke a bone in his neck and was on injured reserve the rest of the year and as it turned out, it ended his career. 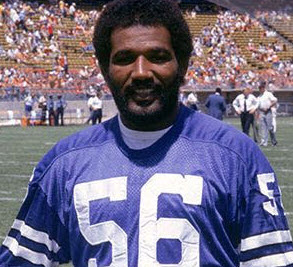 Henderson's poor decisions led to more and more drug and alcohol abuse and led to a two-year stint in prison, where he finally became sober. He got into motivational speaking and into helping kids in his native Austin, Texas.

Then, he won $10 million (after taxes, current payout, the original sum was $28 million) in the Texas lottery.

One wonders what might have been had be been able to stay healthy and sober. His skill-set was perfect for the Dallas system and Landry was committed to the 4-3 Flex, he would not have switched to a 3-4 defense as 25 of the 28 teams did in the 1980s so Henderson would never have to be put in a position where his size would hurt him.

We think Henderson would be a star in today's game as a "moneybacker" or a hybrid Safety/linebacker or even a Lavonte David-type WILL 'backer. Henderson's speed would be coveted in those kinds of roles in today's NFL.

So, yes, there was a lot of bad in Henderson's career and life, but there was some good, too. We wish we could have seen more.