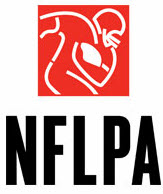 In 1982 the NFL Alumni Association began to award the top special teams player of the year, with Hank Bauer being the inaugural winner. In 1984 the NFL Players Association (NFLPA) and the NFL via the Pro Bowl began to choose the top players in each conference. In 1986 Pro Football Weekly/Pro Football Writers of America began choosing special teams demons to their All-Conference teams. 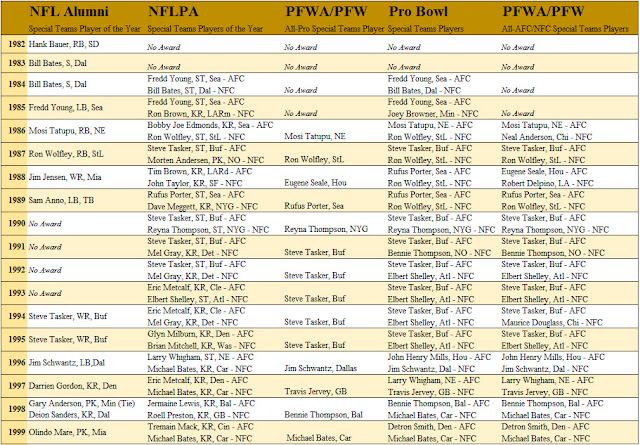 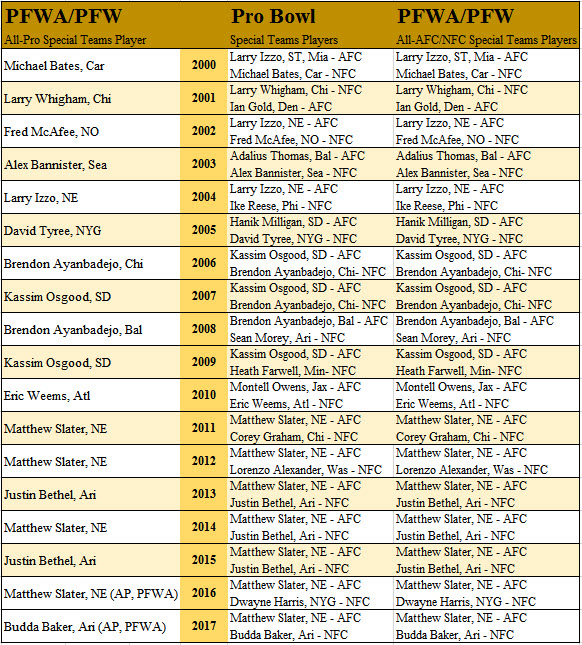 NFL Alumni continued the award through 2010, but from 2000 through 2011 all the winners were kickers or returners. Here are those winners: 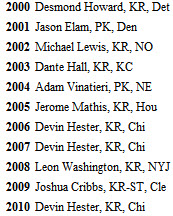 However, not satisfied with that we decided to choose winners, based on our own research and film study winners from 1964-1981. We consulted coaches, the literature of the time, and other sources to try and pick who we thought were the top players in the league, conference plus a couple of honorable mentions.

Here are our picks: 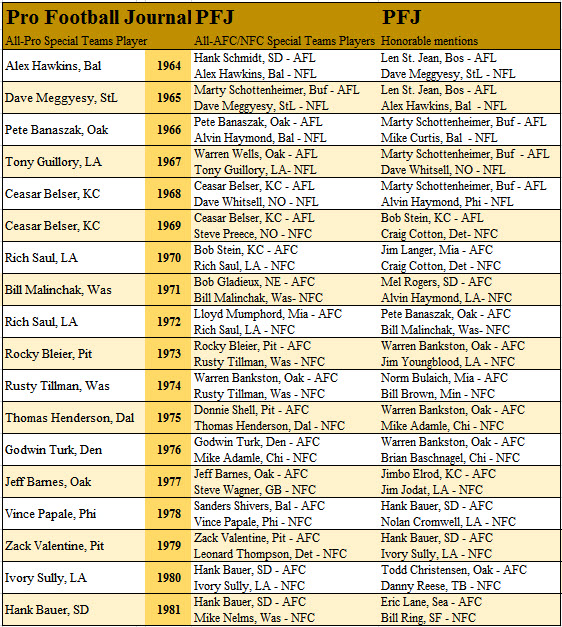 We could have added maybe a couple dozen more names we have in our files as well. We tried to pick players who made tackles, forced fumbles, blocked kicks or punts, i.e. did something to stand out and do things that won games. If you have suggestions, let us know in comments section below.

Alex Hawkins was reported to be the first special teams captain, named by Don Shula in the early 1960s. Back then teams didn't really have "gunners" and Hawkins was more of an "upback" in the punt formation and from there often led team in special teams tackles.

Here are a couple of stills showing the seemingly typical punt formation. 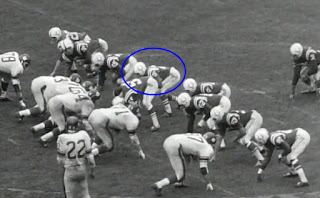 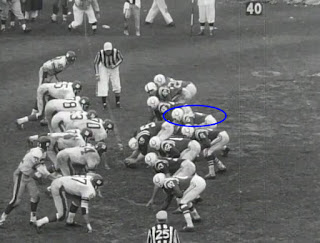 Dave Meggyesy wrote about his special team contributions in his bestselling memoir, Out of Their League. In the literature of the day and Bills fans who saw games back then report that  Marty Schottenheimer was the "Steve Tasker-type" special team of his era. Tony Guillory was a difference maker in 1967 for the 11-1-2 Rams blocking a couple of punts in key games, especially the Packers game in Los Angeles late in the season. Wide receiver Warren Wells had 22 tackles on special teams that same 1967 season.

Ceasar Belser was our pick for both 1968 and 1969. In 1968 he had 21 special teams tackles, blocked a punt and made himself known on the other specialty teams and the following season he had 17 tackles and in 1970 he had 16. Rich Saul was credited with 51 tackles by Marv Levy, the Rams special teams coach in 1970. We don't think it was that many, but he was a fine lieutenant for Alvin Haymond and his "Haymond's Headhunters"—the nickname for the Rams special teams units. Haymond was not only a fine kick and punt returner, he may be the best overall special teams player from 1964-73 when you take into account coverage, returns and rush.

Bill Malinchak and Rusty Tillman led a seemly cast of thousands for the good special teams units the Redskins fielded in the George Allen era. Thomas "Hollywood" Henderson was something in 1975. He could return kicks (how many linebackers could do that?) and was big on the coverage units as well. He had amazing speed for a 'backer.

Godwin Turk was the top performer for the Broncos units, as a coverage guy and as a blocker for Rick Upchurch who returned four punts for touchdowns. In 1977 Jeff Barnes, again a top tackler, but also blocked three punts and was a top special teams contributor for the rest of his career. We didn't pick Vince Papale for PR reasons, but because he was solid, had 19 tackles and was a leader of a very good special teams unit.

Starting in 1978 Hank Bauer began his reign as the top coverage player in the NFL as he averaged about 25 tackles a year from 1978-82. Perhaps the best all-around special teams player of that era was Ivory Sully of the Rams. Sully was top-notch in coverage and often led the team in special teams tackles but he also blocked 7 punts or kicks and was a great jammer of gunners of the opposing teams and could return kicks if needed—like Haymond and Tasker, Sully was the complete package.

Throughout the 1980s and 1990s the names become more familiar and there were actual awards to give them notice of a job well done. Tasker, Ron Wolfley, Fredd Young, Mosi Tatupu, Ron Wolfley, Jim "Crash"  Jensen, Derrick Jensen, Sam Anno, Rufus Porter, and Reyna Thompson with others were among the top honored special teamers among others.
Posted by John Turney at 1:36 AM