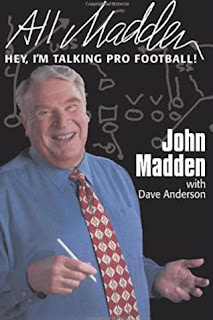 John Madden began his famous All-Madden teams in 1984 and the format was CBS-TV and later ABC's Monday Night Football rather than a paper or magazine like others who picked their own teams did.

However, his first foray into an "All" team was in 1981 when he picked a more traditional All-Pro team for Pro! Magazine. The only Maddenesque thing he did was move guard Randy Cross to center from his guard position. But Madden did pick from all the teams making it a "normal" All-Star team.

The All-Madden team was not that, but an esoteric team that was "Madden-type" players, guys he liked who were the kind of players he'd want to coach. Additionally, they only came from the pool of players he covered in a given season, so some players were simply not eligible.

Nonetheless, it is still worth a mention since we've covered All-Joe and Allmost Pro Teams in recent days. 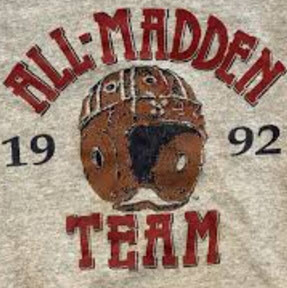 We're going to crib from Wikipedia on this post since we wrote the All-Madden section of the page anyway—many years ago.

Madden took the advice of NFL coach John Robinson—a friend of Madden since elementary school—and created the "All-Madden" team, a group of players who Madden thought represented football and played the game the way he thought it should be played.

In All-Madden, he explained,

What does it mean to be 'All-Madden'? It's a whole range of things. For defensive linemen and linebackers, it's about Jack Youngblood playing with a busted leg, Lawrence Taylor wreaking havoc on the offense, and Reggie White making the other guy wish he put a little more in the collection plate at church. It's about a guy who's got a dirty uniform, mud on his face, and grass in the ear hole of his helmet.

That first year when he narrated the team when he got to Jack Youngblood he said "They out to make a poster of Mr. Football and this guy should be on it".

In 1990 he used the same line for Dan Hampton. It was fitting for both.

Here is the complete initial selections 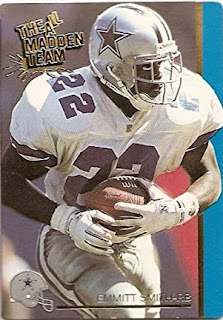