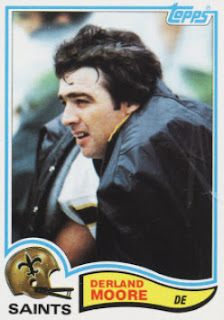 Moore growing up at the foothills of the Ozarks in southeast Missouri, near Poplar Bluff  he was the son of a farmer and a shot-putter.  He told ESPN that he'd "(N)ever heard of the University of Oklahoma or the Sooners . . . That shows how worldly I was growing up in the Missouri Ozarks.” The football field in his hometown is now named after him but he was not a great high school player but his field events in track were enough to get hi to the University of Oklahoma where he played for Chuck Fairbanks and was an All-American defensive lineman there in 1972.

He was not as highly recognized as the famous trio of Selmon brothers— Lucious, Dewey, and Lee Roy but he caught the eye of Saints coach J.D. Roberts and was drafted at the top the Second-round of the 1973 draft.

He was a backup as a rookie but moved into a starter's role in 1974 and held it, at a few different positions though 1984. He played a straight 4-3 from 1974-77 then played a Flex 4-3 when Dick Nolan arrived in 1978. In 1981 with Bum Phillips and defensive coordinator Wade Phillips he was moved to left defensive end. Then in 1982 to Phillips' though he was better suited for nose tackle. 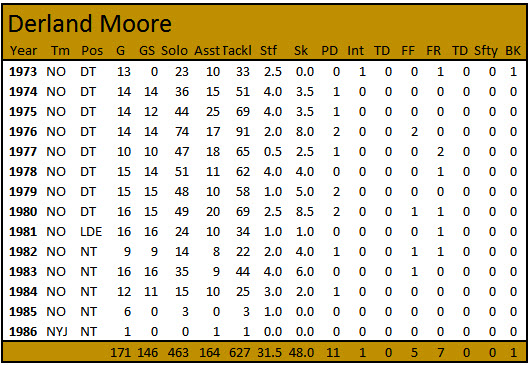 Moore was not one of those players who earned any post-season honors and with the Saints, he never played on a winning team.  The only time he played in the post-season was his final year in 1986 with the Jets. He was signed to fill the hole left by Joe Klecko who had an injured knee and also played in the season finale and two playoff games.

In the 1986 Wildcard win over the Chiefs Jet defensive coordinator praised the newly acquire Moore, saying "He's one tough guy, he really helped us". Moore made a key tackle on a 4th and one play and also deflected a pass and helped keet the Chiefs to 67 yards rushing and a 3.4-yard average gain.

He finished his career with 627 tackles and 46.5 sacks and deflected 11 passes along the way. He was a hard-working grinder who used his strength to win, hold his ground, and some innate quickness to get to the quarterback enough to keep guards honest.