The final Sunday of Summer 2020 in Green Bay provided a beautiful morning for a bike ride.

The afternoon proved equally as accommodating for football.

The Green Bay Packers kicked off the second half of this memorable day by crushing the Detroit Lions 42-21 at Lambeau Field. Just over an hour before Mason Crosby toed the ball to start the contest, this author had to outrace a speedy, tenacious dog in order to get home to watch the game on television.

Green Bay’s offense picked up where it left off in Minnesota. So potent against the Vikings, the unit continued to excel against the Lions.

After amassing 522 yards in the opener, Aaron Rodgers and his teammates followed up with 488 yards at the expense of Detroit. In doing so, the Packers became just the sixth team in NFL history to exceed 1,000 yards in their opening two games of a season according to Pro Football Reference.

Eager to see how Lambeau Field would look on a game day without fans in the stands, I pedaled west on a nearly traffic-free Mason Street across the Fox River. I ducked under Ashland Avenue via 5th Avenue and, after a number of twists and turns, crossed Lombardi Avenue. 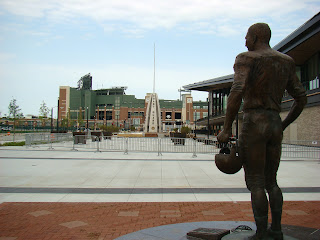 Though the stadium parking lot off Oneida Street was not entirely deserted, it lacked the noise and energy of a typical football-filled Sunday. No one posed in front of the bronze statues of Vince Lombardi and Curly Lambeau.

Even the party houses were mostly silent.

Side streets that were usually parked with cars from one end to the other, boasted long stretches of open space. Thirty-two could be found along both sides of Shadow Lane from Frank Street all the way to Gross Avenue. Half that many dotted Kenwood Street. And one, just one lone vehicle, was parked along Thorndale Street.

This was a game-day scene unlike any other in Titletown.

The Packers made it a six-pack with their showings against Minnesota and Detroit. The team has generated 1,010 yards in starting 2-0.

A good chunk of what they have put up has come on the ground. In two games, Green Bay has ripped off 417 yards rushing including 259 against the Lions.

Aaron Jones led the charge Sunday. He peeled off 168 on 18 carries and scored twice on the ground. His 75-yard dash to pay dirt in the third quarter put Green Bay up 24-14.

By gaining 107 yards in that period alone, Jones became just the fourth Packer player to surpass 100 in a third quarter. He joined Howie Ferguson (109), Andy Uram (108) and Ahman Green (107) in that regard.

Pick an offensive statistic. There is a good chance Green Bay is off to its best or one of its best starts in whatever metric you choose.

Boding well also is the fact that the Packers have scored on 13 of their 20 offensive possessions. Time does not permit a look back to see where that ranks in team history, but it stands to reason that any outfit that can score on nearly two-thirds of its drives is a team to be reckoned with.

As welcome as the early Green and Gold fireworks might be, two games, of course, does not a season make. But being undefeated is preferable to the alternative: getting chased down and mauled by a dog along 12th Avenue.

Teams that amassed 1,000 or more yards in the first two games of a season.