The first fifty years of the NFL were memorialized in a fine book called The First 50 Years: The Story of the National Football League— 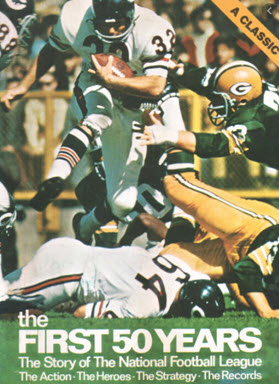 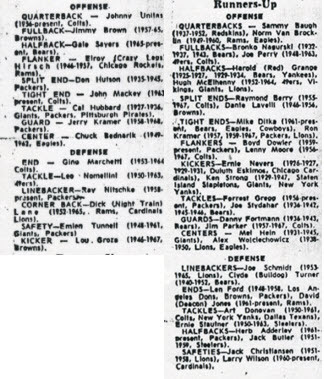 Last year the NFL released a 100th Anniversary Team to cover the entire span of the NFL. However, no one picked the team to partner with the team for the first fifty years—the fifty years from 1970-2020. Well, we'll do it based on our picks last year for the best players at each position and pick those who played long enough (six years) post-1970 to qualify.

SO, you've seen the picks and you may have noticed some of the current players from our series of the top players ever have moved up. But, still, they have not achieved GOAT (greatest of all time) status due to lack of years of service).
The reason that happens is how things move along a Bell curve and the steepness of it at certain points. Some of these players (Martin and Donald are going from B to C, but still have to go from C to D to be goats and there are some might fine players between C and D. 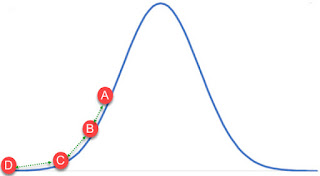 At center, Stephenson's grades were so much higher than the next-best guy that he's the number one all-time and therefore the best of the past fifty seasons
The top three guards were easy but Martin jumped dramatically, all the way ahead of everyone except the top three. We're told he's putting up monster grades—far and above those he leaped. We're putting guys like Randall McDaniel, Joe D, Larry Little, and Hutch.
The tackles followed our previous four picks and did the tight ends. Kellen Winslow gets an honorable mention at tight end and Rayfield Wright, Ron Yary, and Art Shell at tackle.
Peyton Manning is an honorable mention at quarterback.
Barry Sanders and Dickerson and OJ Simpson are honorable at runningback. Yes, OK. On the field considerations only. These three are the best runners but were not as much help on third downs as the top four and not as good in pass protection and Dickerson was a fumbler. Sanders was often taken out on goalline while to top four were great in short-yardage and goalline. We picked all-around backs as the best. And our top four were great, great runners as well.
There could be twenty honorable mention blocking fullbacks but we will go Tom Rathman and Sam Gash only.
We will catch grief for Marvin Harrison over Moss and Owens. We don't care. Yes, the former two were more talented.
Harrison has these "testimonials"—

Champ Bailey said, "(T)he guy who gave me the most problems was Marvin Harrsion . . . he was dangerous. Marvin was the quicker, more precise, route runner . . . he was tough to deal with because he was smart, he played outside the numbers 90 percent of the time and you knew where he was going to be … and he was still hard to stop."

Sports Illustrated's MMQB asked Charles Tillman "Who's the best offensive player you ever played against? Tillman answered, "Marvin Harrison. We played a lot of Tampa 2 with coach Smith, and I could never touch him, couldn't jam him. He was so quick, like a little rabbit. I missed every time. Hardest person I ever had to cover. . . He was unstoppable. The best I ever played against. He made me look terrible."

Charles Woodson also added, " Marvin Harrison was the best receiver I played against. . . he was bigger than you would think from watching him on film, and he was fast and quick and ran great routes."

Harrison also had more All-Pros than Moss and Owens, more Pro Bowls, was First-team All-Decade (Owens Second-team, Moss First), more black ink than Owens and more rings.
He is ahead of both is most things.
As for the defense, we picked a 30 end and a 40 end, with White the 40 and Smith the 30 on the First-team for obvious reasons. Watt edges Selmon on the Second-team and Youngblood edges Strahan on the Second-team. Watt has battled injury lately. Selmon's career was cut short by injury as well. Youngblood had more consensus All-Pros, more sacks, missed fewer games. Both were All-Decade. Strahan got a ring, Youngblood didn't. Close call but Youngblood has the honors and intangibles. Strahan gets a strong honorable mention as does Selmon and Howie Long.
Defensive tackle is very tough. We have no doubt the Aaron Donald is on his way to being the GOAT. But he is just beginning his seventh season and we've moved him past Randy White based on the fact that Donald as two Defensive Player of the Year Awards and White has none. But we can go no further at this point in Donald's career.
Remember Joe Greene had two Defensive Player of the Year Awards himself as did Alan Page (1971 and 1973) and Page was the NFC Defensive Player of the Year in 1970, 1971, and 1974. That in addition to their All-Pro and so on. So, as much as Donald is tearing it up, to surpass Greene and Page he has to do it a little longer and since the facts are this: Greene sustained a neck injury in 1975 and Page began long-distance running in 1977 and both things curtailed the performances of both players late in their careers so it's is likely, if Donald stays healthy, that he will be the GOAT.
With the last fifty years being the era of the 3-4 defense mixed with the 4-3 we picked a 3-4 nose tackle. Culp plays some on the nose with the Chiefs (as did Buck Buchanan) depending on the call and the position of the tight end but in 1974 he moved to the nose full-time and was dominant. Smerlas still is the nose tackle who was All-Pro the most, went to the most Pro Bowls, played in and started the most games of any pure 3-4 nose tackles. Michael Carter is an honorable mention.
Honorable mention 4-3 shade tackles (0+ or 1 techniques) would be Ted Washington and Shaun Rodgers and Snacks Harrison, even though he's run out of gas apparently. Maybe he can make a comeback but for a handful of years he was top-notch.
We picked 40 middle linebackers and 30 inside linebackers though Singletary was the only one who was exclusively one position. Lambert played 30 ILBer in 1982-84. Lewis began as a 4- and then moved to a 30 and then late in his career was as back and forth but mostly a 30. Gradishar began as a 40 but quickly moved to a 3-4 ILber.
The SAMs or Left linebackers and the WILLs were pretty easy. So were the corners and safeties. There would be too many honorable mentions because the top players are each really stood out so much the next level was full of players who were basically even it would just fill up the page.
As for special teams, we'll again get ripped for not including Morten Andersen and Jan Stenerud. Sorry. Tucker has proven to be ahead of his competition too much to not be the GOAT. We are not comparing him to the past, we compare him to current people and in an era of excellent kicker his ahead of the pack the way Dwight Stephenson was ahead of the pack at center. So was Lowery.
Sure, Anderson had a more powerful leg and was better on kickoffs. But, remember he kicked in a dome 8-10 games a year. Lower kicked outdoors more in a stadium with a high crown and that could be windy and then later in the Meadowlands which was doubly bad and was more accurate and also was good at long distances—though not as good at long attempts as Andersen. Of course, Andersen and Stenerud are honorable mentions.
Hekker is the current GOAT. Ray Guy was the old GOAT. Thomas Morstead is an honorable mention as is Reggie Roby.
The return men were, we thought, obvious. We couldn't separate White Shoes and Rick Upchurch so both got the Second-team nod. Hester is the GOAT. Patterson is the modern GOAT and Cribbs, we think follows him, though the best of All-Time likely played pre-1970.
The honorable mentions for special teams are Michael Bates and Ivory Sully. Sure, you've never heard of Ivory Sully but when you add forced fumbles plus fumbles recovered on special teams with blocked kicks and punts he had 18. Steve Tasker had 17. Michael Bates had 16. They didn't have All-Pro or Pro Bowl honors the first five years in Sully's career so he didn't get as many honors as some others, but had they been around, Sully would have earned them.
So, there it is, the 1970-2020 Fifty-Year Team
Agree or Disagree? Blast us in the comments section below.
Posted by John Turney at 6:53 PM