Given their track record, the Green Bay Packers should qualify for a State Farm Good Driver Discount.

Green Bay improved to 3-0 in a 37-30 shootout over the New Orleans Saints at the Superdome Sunday night. In what is becoming routine, the Packers again scored on more than half of their possessions.

Converting opportunities at a rate better than 50 percent is nothing to sneeze at. The six teams that have done so this seasons all have winning records.

Being able to score—and often—has never been more important. According to the NFL, teams have combined for 50.9 points per game through the season’s first three weeks (not counting the Chiefs-Raiders Monday night matchup). That pace is well ahead of the record 46.8 per game tallied in 2013.

Those who can’t keep up risk falling behind.

Fourteen clubs have scored 80 or more points so far including five that are undefeated. The combined record of those 14 teams is 29-13 (.690).

Only two of Green Bay’s four scoreless drives against the Saints could be classified as failures. JK Scott punted late in the second quarter after the Packers had advanced 13 yards, and Jones came up short on fourth-and-one early in the fourth quarter.

The other two drives hardly qualify as such. Wil Lutz kicked off to Tyler Ervin who returned 17 yards as time ran out in the first half. Rodgers killed the clock with a kneel-down to end the game.

The Packers’ success in prime time came close to what they did against the Vikings and Lions. In Minnesota, Green Bay scored on 7 of 10 advances. Against the Lions, they hit on 6 of 10.

Green Bay’s robust average leads the league as well, although that could change pending the outcome of the Chiefs-Ravens clash. Baltimore (60%; 12 of 20) and Kansas City (57.9; 11 of 19) rank second and third, respectively, but one or both could move ahead of Green Bay with an exceptional showing.

So why is Green Bay off to such a zero-to-60 start?

First, a number of players, Rodgers and Jones in particular, have bettered their game. Second, head coach Matt LaFleur’s offense has added a number of new wrinkles that are proving effective.

Helping, too, might be the fact that the Packers have not turned the ball over. Rodgers has fired nine TD passes without a pick, and the team’s lone fumble – by Jones in the opener – went out of bounds.

Finally, Green Bay’s improved scoring efficiency might be part of a league-wide upswing. Last year, teams scored on 372 of 1,076 possessions (34.6 percent) through three games. This year, that percentage has risen nearly seven points to 41.5 (427 of 1,209).

Whatever the reasons, Green Bay would do well to continue its scoring ways. Teams that lead the league in point production tend to fare well.

Of the 30 teams that have led the league in scoring since 1990, 18 earned the No. 1 playoff seed in their conference. Thirteen made it to the Super Bowl. Six, including the 1996 Packers, won the NFL championship.

The Packers have hit the road running in 2020. Here’s hoping their driving record continues to be good.

The 12 Packers teams that scored on better than 40 percent of their offensive possessions in the first three games of a season. 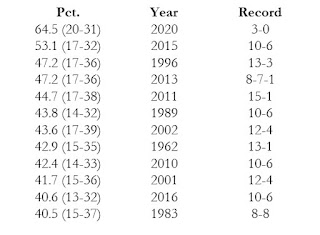