This year will mark 70 years since Don Hutson last played in the NFL, and during his 11-year set a standard that remains the benchmark for production against divisional opponents. When the NFL began divisional play during the 1930's those games took on an even stronger degree of importance.

Though much has been written about this all-time great receiver, in this article, for the first time, you will read his accurate receiving stats and his production against divisional opponents. Steve Sabol is quoted with describing players with "the acid test of greatness"(seeing the player perform in front of your own eyes). During 1964 at Sycamore Junior High school in Anaheim, California I was fortunate to hear stories from Woody Fries (teammate of Hutson in '43) the football coach and physical education teacher.

The sparkle in is a treasured memory as he described not only what Hutson did, but how he did it. The chapter in the sporting news book Football's greatest players Hutson states "he was a gift from the future".

The criteria for measuring Don Hutson against all who came after him is as follows: the receiver must have over 1,000 yards receiving, and at least 15 touchdown receptions against divisional opponents. Hutson against his four divisional rivals is as follows: Lions (1,395 yards and 16 touchdowns), Rams (1,264 yards and 18 touchdowns),  (1,322 yards and 17 touchdowns), and the Bears (1,465 yards and 15 touchdowns). Though there have been many great receivers since 1945... Hutson is the ONLY receiver to achieve this criteria. Much, much more can be shared concerning his productionyet there are two other achievements in his career that stand out.

Five times Hutson took the field against the Brooklyn Dodgers football team and in every game against this non-divisional opponent, he caught a touchdown pass; as he snared 26 passes for 623 yards for 7 scores. The 1942 Chicago Bears were an undefeated juggernaut in winning eleven games. The Bears allowed only 1,179 yards and 7 touchdown passes all season. Hutson caught 18 passes for 264 yards and 3 touchdowns in his two games against Chicagowhich simply put means the ENTIRE rest of the league caught 93 passes for just 915 yards and 4 touchdowns.

Film study shows him usually as the left end, usually split, yet sometimes flexed or even closed. The "Alabama antelope" would explode out of his frog-like stance and dart down the field on his route. Though he would fake, and on his what stands out the most is how his lithe receiver glided down the field adjusting to the ball in flight. Opponents attempts at limiting him with deployments of their personnel in the form of linebackers or an additional defensive back were fruitless and allowed the Packers a strategical advantage in outnumbering the defensive in either running the ball or passing to other Green Bay receivers.
Posted by Coach TJ Troup at 6:53 AM No comments:

Number 40 is Hall of Famer Charlie Joiner, then a corner back for the Oilers. 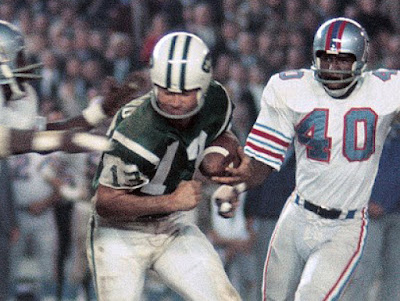 Posted by John Turney at 6:43 PM No comments:

WE ALL HIT IT OUT ON THE SAME DAY

Twice earlier in 1955 Willie Mays (51 homers), Ernie Banks (44 homers), and Henry Aaron (27 homers) had hit home runs on the same day. Today, July 21st was the 3rd time in the season this trio of young sluggers hit it out of the park on the same day; Mays against the Cardinals, Banks against the Dodgers, and Aaron against the Pirates. Based upon their age at the time.....National League pitchers needed to gear up emotionally 'cause there were sure be some more home runs from these all-time greats. Was so fortunate to see these men play at Wrigley Field in the early 60's and revel in their true mastery of hitting a pitched ball (many which cleared the fences).
Posted by Coach TJ Troup at 6:15 AM No comments:

By John Turney
In 1967, against the Baltimore Colts in Week 12,  Mel Renfro wore two uniform numbers—#20 and #44. In the first half, he got his uniform covered in mud and he changed jerseys to #44 and wore it throughout the rest of the game.
Here are some shots:

Posted by John Turney at 3:43 PM No comments: