By John Turney
In a defensive battle Monday night there was one very notable offensive play, a third-quarter 80-yard touchdown pass from Russell Wilson to Golden Tate that put the Seahawks up 14-6 and they held on for a 14-9 win. The Seahawks withheld a late Rams drive and had an excellent goalline stand with no time remaining to preserve the win as the Rams tried five plays from the inside the seven yards with less than a minute to play and didn't allow the hometown Rams to get a game-winning touchdown. 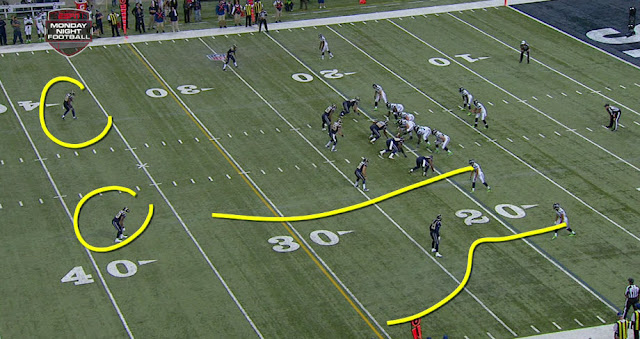 Well, maybe not Coach Gruden who knows there has to be a counter to a seam route versus Cover-2, whether Tampa-2 or Cover-2 latch (a LBer or s slot nickel takes the slot/TE man-to-man). If not teams would throw to the "seam/hole" every time they saw Cover-2.

So, what may have looked like single coverage on Tate which Wilson exploited, was a defensive call that had deep help, it just couldn't get there because an over-agressive play-action read caused a domino effect that led to the safety put in a difficult position—a no-win position as it were.
So, clearly Coach Gruden has forgotten more football than we will ever know, but we don't think a simple seam route challenging the safety was the issue, per say, it was no hole defender putting that safety in a pickel.

That's what we think, anyway.
Posted by John Turney at 4:53 PM No comments: