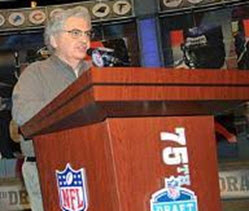 Every year when the Pro Bowl teams are announced there follows a series of articles from varying sources about the so-called "Pro Bowl snubs"—Players who should have, in the respective authors' opinions, made the Pro Bowl. The same is true of the All-Pro teams.

We have always thought these are interesting articles and have quite a bit of value. They identify errors in the Pro Bowl system but also affirming, the good choices (meaning the myth of the Pro Bowl always being a "popularity contest").

Sure, sometimes players get a free ride a year or two past their prime and younger players got snubbed. But it never seems to be a problem when someone says "Lawrence Taylor was 10-time Pro Bowler".

In some cases writers chose their own personal All-Pro teams, the most well-known was Pail Zimmerman of Sports Illustrated and he began picking teams in 1969 with the New York Post.  Gordon Forbes did the same for the Philadelphia Inquirer and later for USA Today. And there were others. But those were not really "snub" articles because they piked players who were All-Pro and Pro Bowlers along with what Dr. Z called "sleepers". Those so-called sleepers were essentially the guys who were "snubbed".

DiTrani's series is not 100% a "snub" article since sometimes his picks were picked for the Pro Bowl, but always they were not as well known or as publicized as the First-team All-Pros, for example.

So, in 1970 DiTrani (a ten-time finalist for the PFWA Dick McCann Award, the de facto writer's wing of the Pro Football Hall of Fame)  was covering the Jets and after that season he picked a team of excellent players who didn't get much if any, "All" selections.—"All" meaning All-Pro, All-Conference or Pro Bowl picks.

Says Ditrani. "Al Atkinson, the Jets middle linebacker, had a terrific season but had no chance of getting All-Pro notoriety with Butkus and Lanier at the same position."

Atkinson was at a stacked position. Mike Curtis, Bill Bergy and others were coming into their own. So, DiTrani created what he called the "Allmost-Pro Team". And as cool as that is, he did it every year for 41 years, which the exception of the strike season. And yes, the "Allmost" is spelled correctly. A nice little wordplay by the Vin man

DiTrani feels confident he did pick an Allmost-Pro team in 1982, but so far, we've been unable to locate it. But we have all the others.

Here are a few samples—

In 1970 he picked two Hall of Fame defensive ends—Claude Humphrey and Elvin Bethea. Humphrey did make the Pro Bowl but Bethea did not. He went on to make a lot more.

We love the Bobby Joe Green pick. In our research we think his punting analytical numbers are impressive in terms of net punting, avoiding blocks and returns and could execute a fake but few fans know who he is.

In addition to his picks, DiTrani often picked a healthy group of honorable mentions.

This year he picked Josh Freeman who was highly rated by scouts we talk to and put up good numbers.
Next is the last one of the 1970s—1979
Here Vinnie picks tackles Chris Ward of the Jets and Claudie Minor of the Broncos. Minor never got a lot of recognition but was a fine tackle. And there is a special mention for a young tackle, starting for the first time—Jackie Slater.
Here is 1999—
Again, we like he tackles, especially Willie Anderson.
SO there you have it, a sampling of DiTrani's work. his creating the Allmost-Pro team.

Historically we think that this kind of team might be a players only claim to fame in his career,. For a Hall of Fame lock, however, it may not mean much. But it could be a little "nugget" for borderline Hall of Fame players, a writer might say, "He went to four Pro Bowls, but he was at that level at a stacked position and when you add in years he was snubbed, it's closer to six or seven seasons at the "blue" or Pro Bowl-type level.
regardless, they are fun to review if nothing more than to see the names, the blast from the past, some of them long forgotten.
So, well done, Mr. DiTrani, this was a fine creation, one that should be considered when the football writers vote for the McCann Award. In fact, coupled with his writing career he should already be in. However, we do hope you get it soon.
Posted by John Turney at 4:20 PM