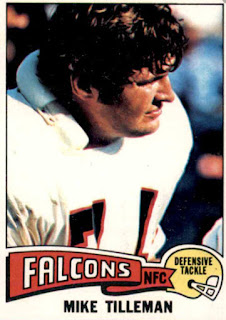 Mike Tilleman was a big Montana man, he played at 6-7, 275 pounds. The Saints website announced to today that he passed away

He was originally a Minnesota Viking. He was picked up by the New Orleans Saints in the 1967 expansion draft becoming on of the Original Saints.

The Saints website stated, "In 1970, Tilleman had a breakout season and was awarded team MVP honors" which correlates to the statistics from the gamebooks of time. He doubled his previous high in tackles forced three fumbles and had nine plays behind the line of scrimmage. We named that year an honorable mention in our "Career Season" series a few years back.

Of course, in that era, it eas not easy for a defensive tackle to get any All-Pro or even Pro Bowl mention with names like Bob Lilly, Merlin Olsen, Alan Page, and Joe Greene in the NFL and in their prime. Also in the NFL were up-and-comers like Curley Culp and Mike Reid. So Tilleman's seasons from 1970-73, which were very good, went little-noticed though he averaged  90 tackles and 7 sacks a season.
Certainly, Norm Van Brocklin noticed. He was the coach when the Vikings drafted Tilleman and in late 1972 Tilleman hung three sacks on the Falcons. In 1973 Tilleman was a Falcon, the team Van Brocklin was coaching at that time. Tilleman was to be the "Merlin Olsen" of that front four that had Claude Humphrey at left end and John Zook and right end and Mike Lewis at defensive tackle (a guy who has some wiggle to him). Tilleman was to be the beef. It didn't quite work out as planned but the defensive line was not the big issue in Atlanta, that's for sure.
Tilleman played two years at the University of Montana and was a two-time all-conference selection. but left after only two seasons to play pro football. Both leagues drafted him but he signed with the Vikings. Then to the Saints and the Falcons with a two-year stop in Houston.
The Saints got a hefty price for Tilleman in 1971— a tackle (Glen Ray Hines) and a linebacker ( Jess Lewis) plus a  1972 second-round pick and a  1973 third-round pick. With the Oilers, he played well, and really improved his pass rush nailing quarterbacks 8 times in 1971 and 11 times in 1972. That 1972 season earned him an honorable mention on the Oilers/Titans Career-year team we did in 2016. As was mentioned it was also impressive the Falcons enough to send a 1973 first-round pick (14th overall) to the Oilers for Tilleman.
Tilleman ended his career with 718 tackles and 45 sacks and blocked three field goals. As for honors he didn't receive anything major, just an honorable mention All-AFC in 1972, and the Newark Star-Ledger gave him All-Pro honors in 1973. So, while not a recognized team by Total Football:  The Official Encyclopedia of the NFL of the NFLPA, it's not nothing, and recognized that he had a good year in 1973. We named that 1973 season a First-team All-Career Year in our ongoing series in 2016.
Tillman was inducted into Montana’s Grizzly Sports Hall of Fame in 2003 and the Montana Football Hall of Fame in 2017. He was known for his charity work and community work in his native Montana.
May he be remembered as a good player and a good man.
Posted by John Turney at 6:15 PM