As the NFL's 101st season kicks off tonight PFJ takes another look back at some of the game's greatest players. Last season the NFL celebrated its 100th All-Time Team. PFJ listed several former coaches and players All-Time choices last season and will post a few more to celebrate this season's opening week.

Today we feature Paul Robeson's All-Time team from 1941. Robeson, a former Rutgers all-american end, played just 2 seasons in the NFL with the 1921 Akron Pros and 1922 Milwaukee Badgers. He retired from pro football to pursue a successful career as a singer and actor.

As for his All-Time Team he selected the following: 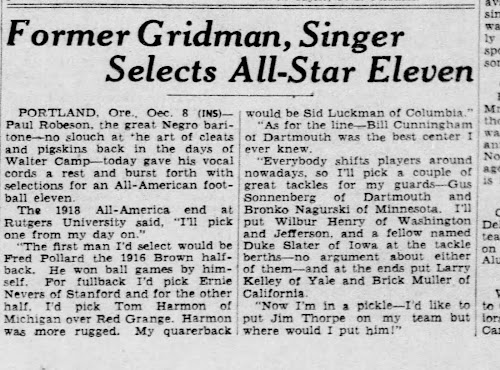 Robeson took liberty with his line by selected "guards" Sonnenberg and Nagurski. He left off Red Grange and saying "Now I'm in a pickle- I'd like to put Jim Thorpe on my team but where would I put him!"