The Rams let Wade Phillips go after three years as their defensive coordinator after the 2019 season and singed young up-and-comer, Brandon Daly, as his replacement.

With no preseason games and little reporting from the Los Angeles/Rams media, we could go little sense of what Daly was planning on doing or what changes or impression he was going to make on the Rams defense.

We were told and knew it would remain a base 3-4 defense. Stay was from the Vic Fango coaching tree and Fangio is a 3-4 disciple.

Other than that, we knew little.

Last night we got some answers. More will come as Taylor Rapp gets healthy—more on thta later in the post.

But in addition to the Rams defense doing a solid job in a win over Dallas we know the starters (not announced by NBC's Sunday Night Football) are as follows: 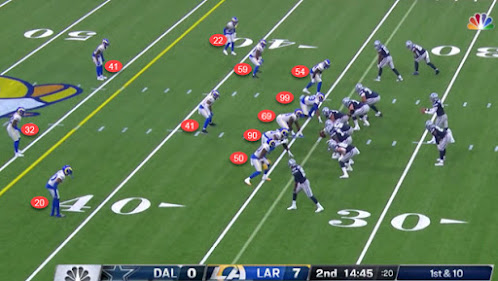 Strong safeties were bigger, stronger, and able to cover tight ends, but also to force run plays inside by taking on blocks of pulling offensive linemen and tackle fullbacks. So the skill sets grew apart over time.
In recent years the skill sets are closer, but even so, rarely do coaches play safeties exclusively left and right for a whole game in both base and nickel. For whatever reason, coaches stick to strong and weak or one safety who is a 'box' safety and another who is more of a MOF-type "middle of the field" safety. Not always, of course, some safeties are excellent at both, they can cover, man or zone, play in the box, blitz, tackle, have great range, but that is not all of them. So, coaches have to make choices.
So, it was interesting to watch last night, twin safeties, not a common thing. We will know more about the coverages when the All-22 comes out tomorrow but it was kind of a treat to see this tactic deployed.
Also of note, John Johnson III is the player receiving the defensive play calls, presumably from Staley—he has the green dot on his helmet rather than Kiser, the every-down linebacker which does happen, a safety taking the plays, but it's not common.
And kudos to rookie Jordan Fuller. Not only was he the starter he had to play both techniques, the strong and weak depending on which was the strong side. And though he did seemingly miss a tackle early in the contest he did make the defensive play of the game when he made a fourth-down tackle stopping a Dallas drive that potentially could have given the Cowboys the lead.
We like Taylor Rapp a lot, but he missed time in camp and never got his starting job back. He only played in the 3rd and really long packages, and on the final drive in addition to special teams. When he was in he was a linebacker in the nickel, and on a couple of plays he played left safety with Johnson dropping into the linebacker spot in that "long nickel" package.
Time will tell if he can supplant Kenny Young as the WILL in the nickel which, really, is a starters position, or if he can move the rookie Jordan Fuller out of the right safety positions. Fuller looked good. Johnson III played some linebacker in sub defenses last year under Phillips so it is possible he could do some of the same with Rapp playing left safety but this is all speculation. All we know is Rapp is a high draft choice who missed a lot of reps in camp and only had a role in really, prevent defenses in game one—along with special teams and that is not why he was drafted so high.
But McStaley (McVay and Staley) is going to play who earns the spot so the onus is on Rapp.
We will keep readers posted on other changes we see in the Rams scheme as we look at more film.
Posted by John Turney at 4:30 AM