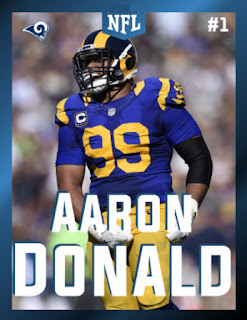 At long last Aaron Donald has received well-deserved recognition as the AP Defensive Player of the Year, but this wasn’t a runaway of the sort we’ve been used to seeing from J.J. Watt. Donald won with 23 votes (a 46% share), edging out Calais Campbell, who won the award as named by the Pro Football Writers Association. It was, however, Donald’s third time receiving votes for AP Defensive Player of the Year—joining a slew of Hall of Famers with three appearances (votes since 1971). 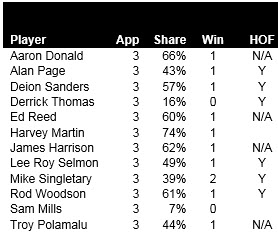 Mills received a total of just 6 votes over the course of his career and is not likely to end up in the Hall, Martin is also an unlikely inductee at this point, but won the award in 1977, edging out Lyle Alzado. This portends well for Donald, who has certainly been among the top defenders in the league for four years now.

We also like to measure a defenders DPOY “Shares” the portion of votes—in aggregate—a player receives over the course of his career.  It’s a fantastic way to recognize players who are consistently good but aren’t always able to break through for a win, or who constantly comes up against an all-time great like Joe Greene, LT or Watt. In Career DPOY Shares Aaron Donald now enters the top 15, ahead of some HOF snubs and entering into the range of all-time greats. 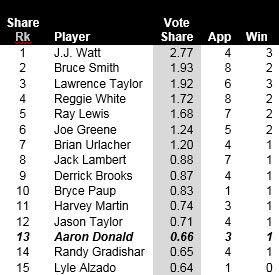 In fact, were it not for the otherworldly Watt, Donald would likely be receiving his second DPOY award having finished a distant second to Watt in 2015.  A second win would have placed Donald with the likes of the all-timers: Bruce Smith, Reggie White, Ray Lewis and Joe Greene —only LT and J.J. have three each.

Congrats to Aaron Donald – a well-deserved award – entering the likes of the all-time greats.
Posted by John Turney at 7:15 AM