By John Turney
Matthew Stafford hit git-time passes to Desean Jackson and Cooper Kupp and now has nine touchdown passes in his first three games, tied for the most of any Rams QB ever, along with Kurt Warner in 1999.
In doing so the Rams offense took away the Bucs running game, holding them to just 35 yards (Tom Brady was the leading rusher for just the second time in his career), and that tied for 28th-best in franchise history—a franchise with a LOT of great run defense performances.
The first two weeks of the season the run defense was not performing as well as it had in 2020, but today the Bucs couldn't run, couldn't stop the Rams passing game, and that ut them in a position to throw and throw and throw—Tom Brady threw for 425 yards, tied for fifth-best in his regular-season career, though as you can imagine tons of that was in "garbage time".
Here are the best Rams run defense performances— 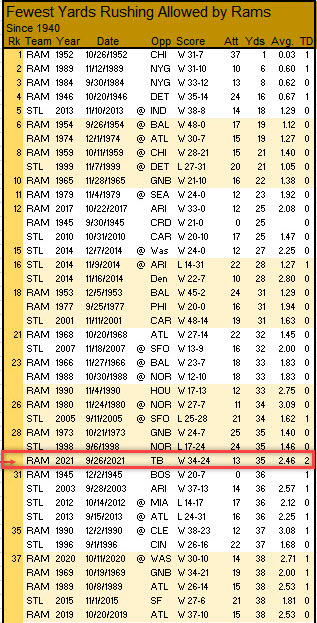