TUESDAY TIDBITS: On the Road With the Monkees

This past Sunday the 18th is the ten-year anniversary of Mr. Steve Sabol's death. In Steve's office was a small sign that stated, "Did you make someone laugh today." Advice we can all learn from.
Years ago Steve did a segment on Dickie Post, and we observe Post riding around on a boys bike and Steve watching. During one of my conversations with Steve asked him about any and all of his upcoming projects, and interjected if he had time he could go on the road with the Monkees—since he stated in the Dickie Post piece he "looked like a roadie for the Monkees".
That classic Sabol laugh roared throughout the room.
Last Thursday the Chiefs took on the Chargers, and the key play of the game was Watson's 99-yard interception return for a touchdown. Seven times the Chiefs have returned an errant Charger pass for a score.
Willie Lanier recorded the first in 1968; Kansas City won and earned a playoff berth that season. Burruss pilfered two and tied a league record by scoring twice in 1986, again a Kansas City victory, and again they went to the playoffs.
On September 6th, of '92, was at "The Murph" with one of my former players, and the key play of the game was Kevin Ross sprinting 99 yards with an interception for a touchdown, and yes—the Chiefs went to the playoffs that year. 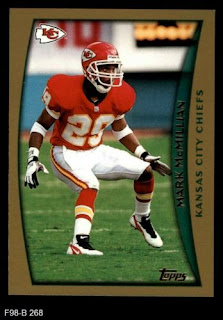 Mark McMillan did it in 1997, and bet you have figured out that Kansas City won that day and went to the playoffs. Marvcus Patton did it in 2000 but the Chiefs lost that day and DID NOT go to the playoffs. Thus when the Chiefs return an interception for a touchdown and beat the Chargers they advance to the postseason. It would be a shock if this year's Chiefs team did not go to the playoffs.
For the first time since 2016, the New York Giants are 2-0, and yes the G-men went to the playoffs that year. In four other seasons since 2000, the Giants have started 2-0, and that usually means post-season play.
Still way to early to predict that kind of success for New York, yet the upcoming Monday night game at home against the hated Cowboys would sure inspire some confidence if they can come away with a win.
Since the Packers and Bears have played so many times and both teams have had outstanding runners in their history it should not come as a shock that there have been more 100-yard rushing performances in games between these two teams than any other rivalry. Thus, Sunday night both Montgomery and Jones went over the century mark to add to the record.
Every year you folks are bombarded with my favorite stat; the defensive passer rating, and with just two weeks in the books the teams that rank near the top could falter, and the teams at the bottom could certainly improve, yet....we have six teams playing outstanding team pass defense right now. In order, they are: Buffalo, Tampa Bay, Philadelphia, Pittsburgh, Jacksonville, and San Francisco. The three teams at the bottom are the Cardinals, Titans, and Dolphins. Since many folks believe the first big game of the year is next Sunday when division rivals the Bills and Dolphins square off, a key factor in the game just might be the Dolphin secondary demonstrating cohesive team pass defense since they face young Josh Allen. 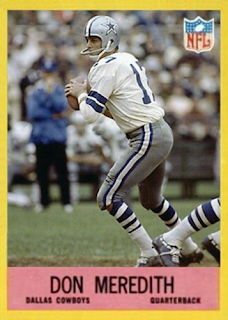 The second half of 1965 the Dallas Cowboys for the first time began to play strong football and earned a trip to the playoff bowl. Landry had a team of young talent that had learned their lessons well, and during 1966 the Cowboys finally became a force to be reckoned with. On September 18th of '66, Dallas demolished the Giants 52-7. Meredith pitched the pigskin to Hayes and Reeves as they both gained over 100 receiving. Meredith's five touchdown tosses tied LeBaron's team record and left corner Cornell Green began to play like an All-Pro as he dashed 41 yards to score with an errant Giant pass.
TJ Troup at 10:54 AM
Share