It wasn't pretty, it was not a classic sack, Jamal Adams was not even blitzing on the play but he got credited with a sack and thus set the NFL record with 8.5 in a season by a defensive back.
All that happened is the quarterback flushed left, and Adams, covering the right flat beat the quarterback to the sticks and helped him to a 1-yard loss. But, it was number eight-and-a-half.
However, it counts and former Cardinals safety Adrian Wilson is now second on the list— 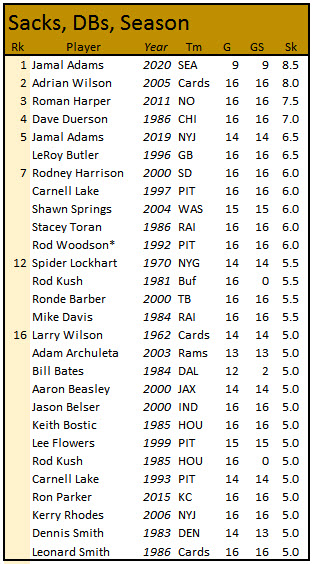 The sack also took Adams over the 20-sack mark, also rare for a defensive back—

Here is the all-time list, but as can be seen, Adams is averaging 6 per 16 games, and is in a class by himself. He should surpass Harrison in two years if he keeps up his current pace.