Am sure enjoying going back to do the research and view film of this era, the only issue for 1954 was there were so many strong candidates for some of the weeks. That said, as you are about to read; why eliminate when you can have co-defenders?

WEEK ONE
September 26th: For the first time have a tri-Defensive Players of the Week, and they are teammates. Though defensive tackle Leo Nomellini and cornerback  Rex Berry have excellent games for San Francisco, the trio are Niner teammates Hardy Brown, Clay Matthews, and rookie Jackson Brumfield.

Watching the quality complete game film of the 41-7 victory over Washington these three men consistently invaded the pass pocket and combined for 6 sacks. An example you ask? Matthews cannot bring Scarbath down initially, then Hardy Brown quickly leaves his coverage area and rockets into the backfield to get the "sack". Brumfield from his stand-up stance at right defensive end in his first game in the league is a constant demon as a pass rusher, plays the run well, and even recovers a fumble. 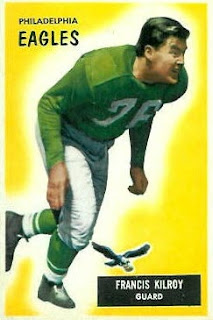 October 3rd: Philadelphia opens the season with a victory over the four-time defending Eastern champion Browns, and then falls behind the Cardinals 16-0. Bucko Kilroy forces a Johnny O. fumble (recovered by Concrete Charley), and the comeback begins. The Cardinals cannot run the ball effectively against the Eagles front seven led by Kilroy.

Kilroy will at times drop back at the snap of the ball from his middle guard position into coverage(he intercepts twice), and of course, most of the time he just sheds the center's block and helps stop the run as Philadelphia scores 35 unanswered in the victory.

Cameron will record seven interceptions and three fumble recoveries during the campaign. The result of his excellent season is being chosen for the Pro Bowl. Paul does not accept the reward and is replaced by one Frank Gifford. Paul Cameron plays just this one season in the NFL.

WEEK FOUR
October 17th: Are the Steelers really contenders for the Eastern Conference crown? The only way anyone would truly believe the Black & Gold are contenders would be if they beat Cleveland—except they have never beaten the Browns in eight tries. Ahead 14-13 in the 2nd quarter right corner Jack Butler returns a Graham aerial 41 yards for a touchdown to ignite the Steelers in their 55-27 demolition of the Browns. Butler later intercepts again and has another outstanding season, yet again he is not selected for the Pro Bowl.

WEEK FIVE
October 24th: Len Ford continues to demonstrate he is the best right defensive end in the league as the 1-2 Browns must beat a winless Cardinal team to stay in the four team race in the eastern conference. The Cardinals can gain only 60 yards rushing as Ford and his stalwart teammates shut down the ground attack while recording three sacks. Ford also recovers a Chicago fumble in the 35-3 victory. This is the fifth time in five seasons Ford had been the retro Defensive Player of the Week.

WEEK SIX
October 30th: Green Bay under new coach Lisle Blackburn travel to Philadelphia for a Saturday night clash with Philadelphia. Adrian Burk starts to roll left and his attempted pass to halfback Jerry Williams up the left sideline is pilfered by one-eyed thief Bobby Dan Dillon. The Packers right safety dashes, weaves, and cuts back expertly on his 59-yard touchdown return in the Green Bay 37-14 victory. Dillon will earn a Pro Bowl berth for his superb season.

WEEK SEVEN
November 6th & 7th: Bob Dove was a strong contributor in the Cardinals championship season of 1947, and he joined the Lions during the latter half of their quest in 1953 to again win another title. Dove knows how to win, and contribute, and in his first game as a starter in his final season in 1954 he pillages the Colt pass pocket all night as he records three sacks in the 27-3 win.
Emlen Tunnell has intercepted three passes in a game before his sterling performance on November 7th, yet the Giants must beat Pittsburgh to remain alive in the eastern conference race with the Eagles and Browns. New York improves to 5-2 in Jim Lee Howell's first year at the helm with the 30-6 victory. Over the years the Steelers must have hated seeing Tunnell jog onto the field, since he intercepted more Pittsburgh passes than any other player in league history. Tunnell and Dove are the co-Defensive Players of the Week.

WEEK EIGHT
November 14th: San Francisco has already beaten Detroit earlier in the year, yet will fall out of contention in the rematch with a loss. Down 20-0 already Tittle rolls left and is pressured by right defensive end Jim Cain. The wobbly aerial is plucked out of the air by right linebacker LaVern "Torgy" Torgeson and advanced into 49er territory. Layne then zips a pass to Girard and the Lions are on their way to a 48-7 blowout victory and another western conference crown. Torgy is our Defensive Player and Week, and later in the year is selected for his first Pro Bowl. 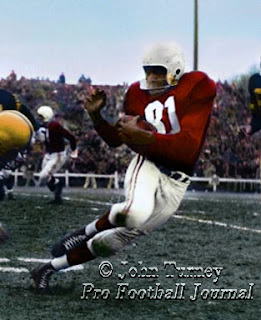 November 21st: Stydahar traded with the Rams for Richard Lane before the season began, and the "Night Train" continues his mastery of secondary play for Chicago. He will align at all four secondary positions during the year. The Cardinals have won just three of their last 28 games entering this contest, yet there is no doubt that when Ollie Matson is at left safety and Lane at right safety the Cardinals have the fastest duo in league history.

Lane will lead the league in interceptions in '54 with 10 (he gets one in this game), but it is the visual of him that compels me to name him player of the week. How so you ask? Billy Wells of the Skins breaks loose from deep in his own territory and is off on a record-setting run of 88 yards. Lane missed the tackle just past the line of scrimmage, but this tough Texan never gives up and takes off in hot pursuit. Lane tackles Wells just over the goal line in one of the most impressive visuals I have ever seen. Later in the game, Choo Choo Justice catches a pass up the right sideline for the 'Skins and there is no one else in the picture as Choo Choo looks like he will score easily. The "Night Train" flashes into the picture and physically throws Justice to the turf. The Chicago Cardinals win the game 38-16.

WEEK TEN
November 28th: Paul Brown traded 10 players to get 5 in return. One of the five entered the Army, but now he is in the line-up for Cleveland at middle guard. Mike McCormack has demonstrated all season that while his technique is vastly different than Bill Willis, he is just as effective. He sheds blocks, plugs holes, and can apply pressure to the pass pocket up the middle. Cleveland has rebounded after a 1-2 start and with a victory today over NYG they can still win the eastern crown. New York gains 4 yards rushing, that's correct—FOUR yards (21 attempts), and McCormack is the key man. Big Mike also recovers a fumble in the 16-7 conquest of the Giants. 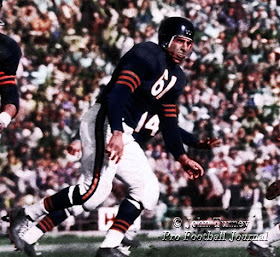 December 5th: After the past two woeful campaigns the Bears are once again a winning team, and defensively Clark Shaughnessy continues his mystical alignments and red dogs. Bill George has been a starter on the offensive line, yet now he is usually the left or middle linebacker, and even sometimes he has his knuckles in the dirt and shoots the gap as a defensive lineman. Bill helps limit the Cardinals to 81 yards rushing in the 29-7 victory. The Bears intercept seven passes, and Bill as a linebacker dropping into coverage pilfers two. The dawning of a new era where teams will align with four defensive lineman, and three linebackers for the bulk of a game.

WEEK TWELVE
December 12th: Brumfield & Matthews could have easily been co-Defenders of the Week as both record two sacks in the victory over Baltimore. These two stand-up defensive ends almost certainly finished one/two in the league in sacks for the year (not sure the actual totals), yet the award goes to a Washington Redskin. Washington? You mean to say a defender from the most porous defense in the league can win the award? Damn straight! Big Jim Ricca either aligns at right defensive tackle (when the 'Skins are in a 4-3) or is aligned on the center's nose as a middle guard.

Dick Modzelewski invades the Cardinal pass pocket and knocks the ball loose from Lamar McHan. Ricca scoops up the ball and trundles 25 yards for a touchdown. Washington is on their way today to a 37-20 victory. The Cardinals can gain only 78 yards rushing as Ricca plugs the middle, and later in the game recovers another Chicago fumble.