The Year of the Defensive Lineman: The 1951 Defensive Players of the Week

Today is Len Ford's birthday, and as such the appropriate time to list the Defensive Player of the Week for all twelve weeks of that fascinating season.

WEEK ONE
September 30th: Pete Wismann is the starter at right linebacker for the 49ers as they take on the defending league champion Browns at Kezar. Twice in the game, Pete intercepted future Hall of Famer Otto Graham. First time on a curl pattern out of a pro left formation by Cleveland where Wismann expertly drops into the right area in coverage and he returns the theft 10 yards.

His second late in the game comes with Cleveland in a full house t-formation as Graham attempts to toss to his back out of the backfield. Pete returns this pilfered pass 2 yards to the seven-yard line. The 49ers believe they are now contenders in the National Conference with the 24-10 victory. 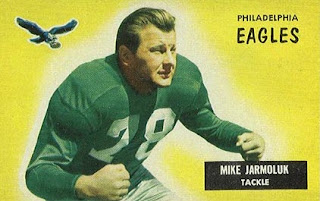 October 7th: Two men standout with such dominating performances that they are co-players of the week. Mike Jarmoluk is a rock at defensive right tackle for the Eagles. The 49ers have success early running to the right (away from big Mike), but as the game progresses the San Francisco ground attack is stymied and Philadelphia takes the lead. Jarmoluk records an interception and a fumble recovery; a rarity for any defensive lineman as the Eagles win 21-14.

Arnie Weinmeister is listed as a defensive tackle in many football encyclopedia's and websites, and while he is a d-tackle when the Giants are in a 5-2—he is the defensive left end for NYG when they are in the 4-3. His versatility, strength, and pursuit are so legendary he earned his way into the Hall of Fame in a very short NFL career. For most of this game, he is at defensive end.

This is as good a time and place to pay tribute to Nate Fine; the finest cameraman of his era. The eye-popping color film of this game between the Redskins and Giants is a true joy to watch. Arnie is so dominant in this game that the Washington coaching staff twice replace the man who is suppose to block him.

Weinmeister sheds attempted blocks and makes tackles on inside running plays, pursues across the field to help on tackles, records 3 sacks in the game (one in the first quarter when NYG is in the 4-3, and two in the fourth quarter when they are in the 5-2). He even recovers a fumble that is taken away because a Giant was offsides.

WEEK THREE
October 14th: Detroit enters this game with a 2-0 record, while the Rams are smarting from the beating they took from Cleveland the week before. Left safety Norb Hecker intercepts twice for the Rams in their 27-21 win over the Lions. His first early in the game which he returns 25 yards, and his second late in the game when a Doak Walker fake punt and run for a first down had given Detroit momentum. Hecker intercepts on the Ram twelve-yard line and returns 13 yards to help seal the victory. 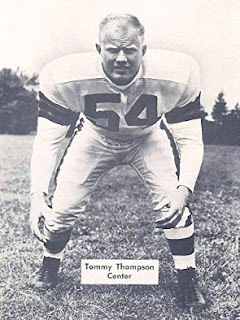 October 21st: Cleveland takes on the Steelers single wing attack at home and shut-outs Pittsburgh 17-0. Right linebacker Tommy Thompson recovers a Steeler fumble (he returns 3 yards), intercepts down near the Cleveland goal line (he returns 6 yards), makes open field tackles when called upon, helps stop single wing sweeps his side, and finally on a red dog records a sack for an 11-yard loss.

WEEK FIVE
October 28th: Los Angeles is 3-1 and having beaten the 2-2 49ers twice in 1950 anticipate another victory. Defensive coach Phil Bengston uses seven defensive backs in the 44-17 win over the Rams. Van Brocklin is just 13 of 30 with 5 interceptions (passer rating of 32.9) and his main tormentor is our defensive player of the week in safety Jimmy Cason (he returns his two thefts 42 yards). The San Francisco victory scrambles the National Conference race as four teams are now in contention(Los Angeles, San Francisco, Chicago, and Detroit). 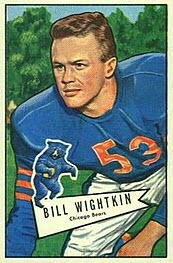 November 4th: Bill Wightkin sometimes played offensive end in 1950, but this season he is the best left defensive end in the National Conference. Using a stand-up stance very similar to Len Ford's he helps his nasty grizzly teammates shut-out Washington 27-0. Bill nails Sammy Baugh for a sack, drops into coverage to tackle Dudley on a circle route, defeats a Redskin trap block to stop Dudley in his tracks on an inside running play, and forces errant passes with the pressure he provides on his pass rush. 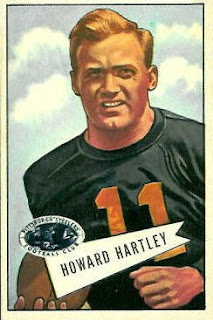 November 11th: When a defensive back intercepts 10 passes in a twelve game season he usually is invited to the Pro Bowl in Los Angeles. Left corner Howard Hartley of the Steelers does in fact record 10 interceptions in 1951 but is not selected to go to LA. Hartley leads the black & gold to a 28-7 victory over the Packers at Forbes Field. The Steelers 5-3 defensive front pressures, Thomason & Rote, all game (6 sacks for 55 yards), and when they did get off their passes Hartley was ready and waiting. He intercepts on a 3rd and 3 play and later in the game on a 2nd and 15 (he returns the interceptions 16 yards).

WEEK EIGHT
November 18th: Floyd Jaszewski is starting left defensive tackle of the Detroit Lions. Though not known by many through out the league; those offensive guards that tried to block this stud would tell you he came to play. Detroit needs a victory to stay in the National Conference race and defeats the Eagles 28-10 at Shibe Park. Floyd is a stone wall against the run (Philadelphia gains 102 yards on 44 attempts) and recovers two fumbles to highlight the best afternoon of his career. 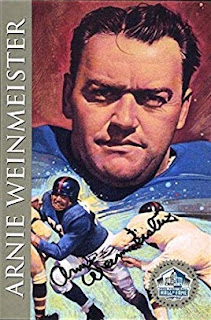 November 25th: The Giants are coming off a loss to Cleveland and can ill afford another as they take on the Cardinals on a day of freezing rain and hail. Arnie Weinmeister spearheads the NYG defense all day as he and his 'mates record 7 sacks for 59 yards, and limit Chicago to just 65 yards rushing on 36 attempts. The New York victory keeps them in the American Conference race. 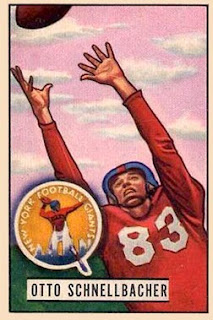 December 2nd: Tom Landry returns a Steeler fumble 9 yards for a touchdown to give New York a lead, yet he is not the Defensive Player of the Week. That honor goes to his teammate in the secondary—the league interception champion Otto Schnellbacher. The Black & Gold single wing can gain only 79 yards rushing, and as such must go to the air, and Otto is ready, willing, and waiting. He cements the NYG 14-0 win at the Polo Grounds by returning an interception 46 yards for a touchdown.

WEEK ELEVEN
December 9th: He just cannot be blocked. Who is the "he" I am referring to? Why none other than Len Ford. Pittsburgh tries guards, tackles, backs, and even tight ends, and they all fail. No player has ever had a better defensive season than this big stud. From his stand-up stance at right defensive end he is easy to see, but just CANNOT be blocked in 1951. Do I have data to back up such a statement? You betcha! Ford recorded a sack in 9 consecutive games, and in this 28-0 whitewash of Pittsburgh, he gets FOUR! Watching him on film it is amazing to me he has not been mentioned more often as one of the All-Time greats. 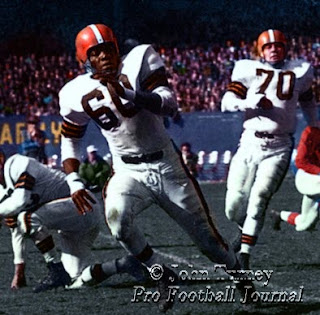 December 16th: Philadelphia Eagle quarterbacks will drop back 34 times in this game. They complete 9 of the 24 passes they actually can get out of their hand; 'cause the other 10 times they are sacked. The regular season ends with Co-Defensive Players of the Week. Len Ford again has another monster game with three sacks to give him a record of 21 for the year, yet his teammate—the undersized but lightning quick Bill Willis gets 4 sacks. How many times in league history has a nose or middle guard ever gotten four sacks in a game? Never, or better yet send me the film of the game where someone had five.
Posted by TJ Troup at 9:26 AM