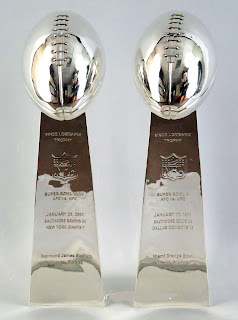 Yesterday neither Tom Flores nor Don Coryell was elected to the Pro Football Hall of Fame. Predictably partisans were upset on Twitter.

A sampling on Flores: 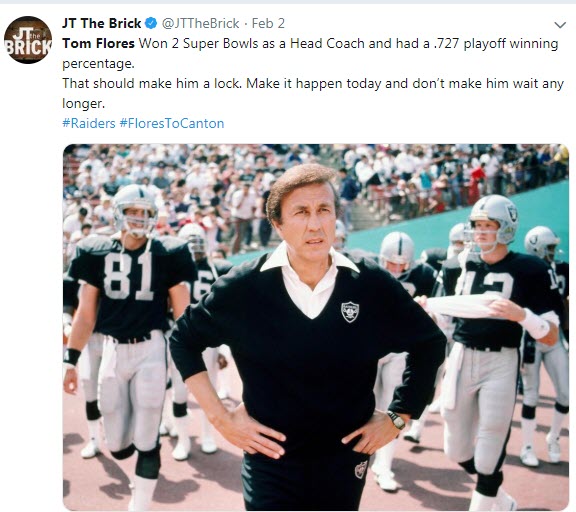 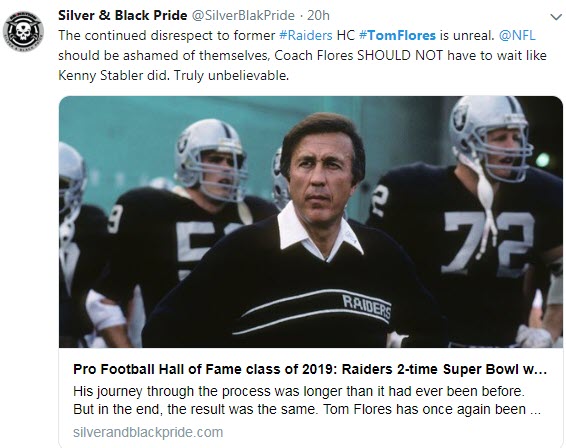 Our question is how do you separate and order the coaches that have won two Super Bowls? Flores is one of them, Coryell is not. Coryell is more of an innovator and wasn't able to get his teams over the hump. So, we will discuss him another day.

Flores does have the two Super Bowl wins, as does Jimmy Johnson, who didn't make the Final 15 for this year's Hall of Fame but did make the Semifinal list of 25.

There are nine coaches with two Super Bowl wins—Don Shula, Tom Landry, Bill Parcells, Vince Lombardi (who are in the HOF), Tom Flores, Jimmy Johnson, George Seifert, Mike Shanahan, and
Tom Coughlin who are not.  Lombardi's 2 wins shorts him because he won three other NFL Titles before the Super Bowl was introduced. Shula and Landry are coaching legends but they did lose seven Super Bowls between them. But they had longevity and were credited with coaching innovations, Landry especially. 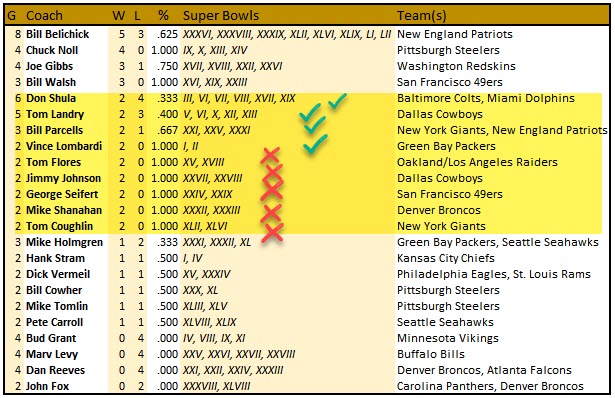 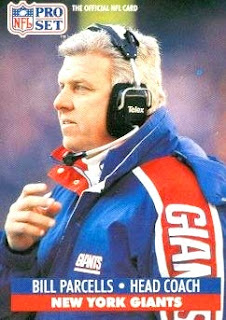 Parcells won two with the Giants, then lost one with the Patriots. He's more of a contemporary to Flores, Johnson, Siefert, Shanahan, and Coughlin. So, he sets the standard, in our view, for the two-ring coaches.

Parcells was a 'motivator type' of a coach, rather than Belichick who is more of an 'Xs and Os' coach, though we wish to take nothing away from him, to win as much as he has Belichick has to be a great motivator, too. We just want to paint, with broad bushes where a coach fits.

He won the Super Bowl in 1986 and 1990 and then went to the Patriots where he took a poor team, improved it and got to a Super Bowl in 1996, losing to the Packers. He then turned around the Jets and later the Cowboys, though the Cowboys were not able to get too far in the playoffs and the Jets got to an AFC Championship game. 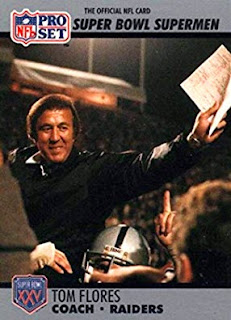 Fans of Flores like to present him as a combination candidate, listing his playing career achievements as part their reasoning why Flores should be in the HOF. We hope the voters ignore that because it's not relevant. Flores was a mediocre NFL player and that is being kind. Those same folks also seem to think him sitting on the bench in 1969 for the Super Bowl champion Chiefs counts as a ring. People, it's a gravy train ring. It does not give him any extra cachet.

What does give him extra cachet is being a trailblazer for being the first Hispanic coach in the NFL and that is absolutely worth noting.

As an assistant coach, it's not specified what his role was, though he was an offensive coach that worked with the quarterbacks and the Raider offense was very good in the time he was there. Ken Stabler called the plays, but Flores was part of the game planning and game preparation.

However, in 1984 and 1985 the Raiders badly underachieved, they were a very talented team, especially on defense and at running back and on the offensive line but they were bounced from the playoffs early in both seasons (In fact, both were one-and-dones).

Flores was not good in his 'second act'. He was 14-34 with the Seahawks for a .292 winning percentage. In some ways, Flores' teams were like the little girl with the curl. When they were good they were very good (1980 and 1983) and when they were bad they were very bad (the poor teams and the underachieving good teams).

We are not sure if Flores was an Xs and Os guy or a motivator or a little of both. He didn't have the Lombardi/Jimmy Johnson style but also didn't have the reputation of a Coryell or Mike Martz as an offensive scheme master. But there were some interesting things the Raiders did in 1983-86 or so, both on offense and defense that should be mentioned. 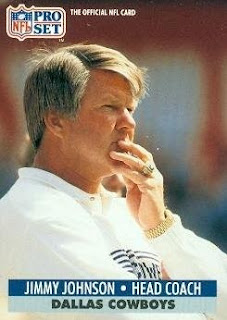 Jimmy Johnson came to the NFL from college, so he didn't have a track record as a coordinator or position coach so his HOF resume is only as a head coach.

Johnson took over a bad Dallas franchise that was damaged by poor drafting (sorry Mr. Brandt) and maybe outdated schemes like the Flex defense (sorry Coach Landry). Johnson had a leg up on most of his fellow NFL coaches because he knew college talent and drafted accordingly. He's credited with perfecting the NFL Draft Trade chart into almost a science. Prior to the chart, which gives numerical values to each draft lost, teams did back-of-the-envelope valuations, i.e. two second-round picks were equal to a first-round pick or two-thirds were worth a second-rounder, and so on. Then teams would haggle to 'even it out'.

Johnson also made key trades (Charles Haley, for example) that put the finishing touches on a Cowboys team that was a mini-dynasty from 1992-1995. His predecessor, Barry Switzer, took his team and won a Super Bowl in 1995.

After some acrimony, Johnson left the Cowboys and then a couple of years later he was hired by the Dolphins for his second act. His second act was good, but not great. he drafted well and his teams were in the playoffs in three of his four seasons there and they won a couple of playoff games.

We see Johnson as a motivator more than Xs and Os (and remember this is a generalization, he knew his Xs and Os but his forte was drafting well (player personnel and motivation) 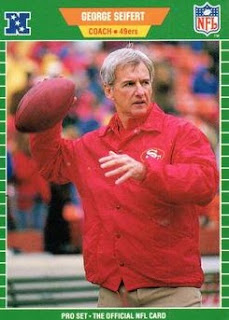 Siefert, though, gets some of the credit for that 1980s 49er dynasty since he was the defensive coordinator for much of it, getting two Super Bowl rings as a DC (1984, 1988).

Siefert, we think, based on his years as a DC was an Xs and Os guy, and maybe a sublime motivator but not the obvious leader-type like a Johnson or Shula, etc. 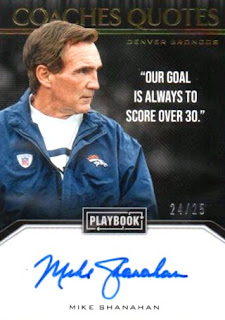 Mike Shanahan actually had a first act with the Raiders and it didn't end well. Perhaps he wasn't ready to be a head coach or it was not a good team Flores left him with but after going 7-9 in 1988 he was fired after going 1-3 in 1989 and was replaced by Art Shell.

Shanahan went back to being an offensive coordinator in 1991 (he was in that position from 1985-87 for the Broncos, helping Broncos to a pair of Super Bowls. He then was the OC under George Siefert with the 49ers from 1992-94.

An Xs and Os coach, Shanahan was very successful with the 49er offense with Steve Young winning two MVPs and was a runner-up once and finished with a great performance and gameplan in routing the Chargers in 1994 in the Super Bowl.

Shanahan took over the Broncos in 1995 and a great 14-year run, winning two Super Bowls and posting a 14-7 playoff record. However, the last couple of seasons were not stellar and he was let go by the Broncos and he started his third act with the Redskins in 2010.

It was okay for a short time going to the playoffs in 2012 but the wheels came off in 2013 and Shanahan was gone. He had a poor opening act, a great second act, and a so-so third act. 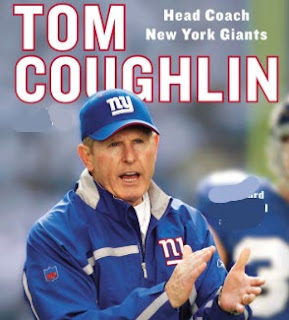 Tom Coughlin has not received a lot of HOF pub likely because he's still active in the NFL as an executive with the Jaguars. Coughlin was a receivers coach in the NFL for seven years before going to college to coach Boston College.

In 1995 he had his first act, with the Jacksonville Jaguars, and took an expansion team to the AFC Championship Game in his second year and peaking in 1999 with a 14-2 record. He introduced, from our memory, the four defensive end pass rush with Jacksonville (and it proved vital in wins over the Patriots in Super Bowls, especially 2007). Then things slowed down and after four straight losing seasons, Coughlin and the Jaguars parted ways.

His second act with the New York Giants will give you whiplash. At certain points in his tenure with the Giants they fans wanted to put him in the Hall of Fame immediately and other times they wanted him fired without passing Go and not collecting $200.

Coughlin ended with two rings with the Giants and a 12-7 record in the playoffs with the Jags and Giants. We see Coughlin as the motivator-type rather than the 'mad genius' Xs and Os type.

Conclusion
There is none. How can you separate these coaches? None have the perfect resume. Coughlin had a good first act and great second act, the others tended to have a great first act and average or even poor second acts. Some are Xs and Os types, others are motivators, leader-types. Some offensive, others defensive. Some were good coordinators, others came from college and don't have a coaching record as a coordinator.

We do think that definitively stating one coach is ahead of others, i.e. (Flores should be in NOW and it's an injustice that he's not) is not fair because a close, non-partisan look at his career does show some question marks. But the same is true with Johnson. Johnson had a great first act and a good second act. He was a leader and innovator.

Shanahan failed in act one, was great in act two, and so-so in act three. Siefert was a great coordinator, had a great first act and a failure in the second act.

So, we think these guys are close but do think that due to success at both stops Johnson and Coughlin have the slight edge. But reasonable people certainly disagree.

And then we have the issue with a great innovator and very good but not great (no Super Bowls) coach in Coryell. And then we have Mike Holmgren, an Xs and Os guy, and a motivator, but he's 1-2 in Super Bowls. But he did have very good success at both his stops as a coach.

So, when you see "Flores is getting jobbed" or "Jimmy Johnson is getting ripped off" think also of Shanahan, Seifert, and Coughlin (less so because he's still active). All these coaches have some excellent things on their HOF "resumes" but all have a few warts, too. And the partisans refuse to face that fact. They can be ostriches with their head in the sand on occasion and it gets frustrating.

How would you order these coaches?
Posted by John Turney at 1:01 PM