On January 14, 1970, the Pro Football Hall of Fame released the list of the All-Time AFL Team. The teams were compiled as a result of a vote of the AFL members of the Hall of Fame’s Board of Selectors.

This is the team they selected (graphic by Wikipedia)— All great players, but did all of them deserve to be on it? Or are people on the Second-team more worthy to be First-teamers?

This is not a criticism of the voters at the time. They, in good faith, voted for who they thought should be on the team. But we do get to ask if Joe Namath over Len Dawson was the best choice for an honor that is supposed to span the length of a decade. The vote was taken the day before the Chiefs beat the Vikings in Super Bowl IV.  Had the vote been taken after that game would the vote have been different?

Namath was a legend for his Super Bowl III win over the Colts and was a terrific talent and his "eye test" is likely superior to Dawson. But, Dawson won three AFL titles and one Super Bowl. His stats were superior to Namath's. Namath, however, was an AFL MVP in 1968 and 1969 and Dawson didn't win any such awards.

In short, if you look at peak Namath wins. If you look at the length of accomplishments, the "decade" part of the equation Dawson wins.

So, with that in mind, we've reviewed the First-team of the Official AFL All-Time team to who we think had slightly stronger cases than some of those chosen. Most selections were on the money. But a few deserve some scrutiny. 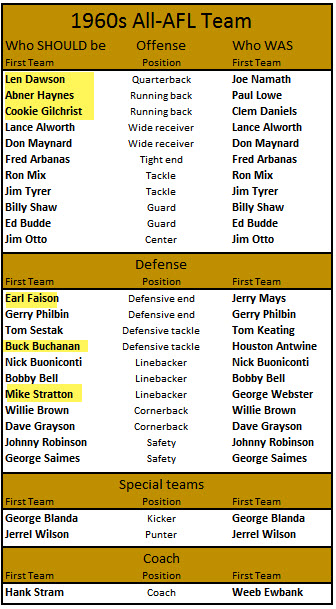 In addition to Dawson, we think Abner Haynes and Cookie Gilchrist has slightly better AFL careers than Paul Lowe and Clem Daniels. Haynes and Gilchrist were AFL MVP/POY winners and part of AFL championships and had superior stats, though close, than the others.

On defense, Earl Faison played long enough and was superior to Mays. Rich Jackson was our original choice but after careful consideration decided he didn't play long enough so we've updated the teams. Jackson was All-AFL twice and was good in 1967 but in 1966 he was a backup in Oakland really, had just three full seasons and that does not make a decade. We also think that Chiefs DT Buck Buchanan should have been First-team over Antwine.

We also think George Webster's three seasons was not enough to qualify for an All-Decade team. At his peak, he rivals Bobby Bell as the best OLBer in AFL history, but in our view, Mike Stratton's longevity and also pretty high peak deserved the honor.

As for the Coach, Stram, when you included Super Bowl IV, deserved the top slot.

We also had a few disagreements on the Second-team, but film review and research of gamebooks give us some insights that help separate top-notch players.

With that qualification here is our AFL All-Decade picks: 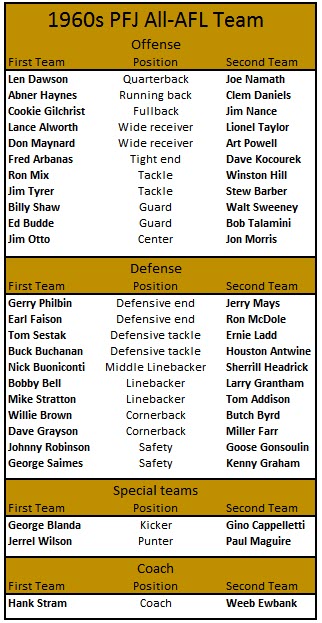 Here is an update. These are the top talents of the AFL, the best players who played in the AFL but some of them only played 3-4 years and are not really qualified to be on an All-Decade team. The hardest choice might have been halfback where lots of talented guys played like Paul Lowe and Abner Haynes but we went with Daniels. But we fully admit several others fit there.