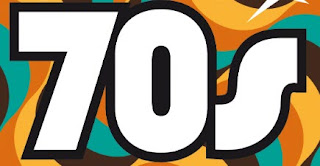 The 1970s All-Decade Team was the first to have First- and Second-teams rather than varying numbers at different positions (for example there were three All-Decade quarterbacks in the 1950s and 1960s iterations of the All-Decade teams). In the 1970s there was one First-team quarterback and then a tie for the Second-team. So, to us, it made more sense.

That said, there were a few issues, not with the selections but by putting some people on the team that really didn't qualify in terms of years of service. In our view, Earl Campbell, who played just two seasons in the 1970s, shouldn't have been on any 1970s All-Decade Team.

Here is the official team with the votes: 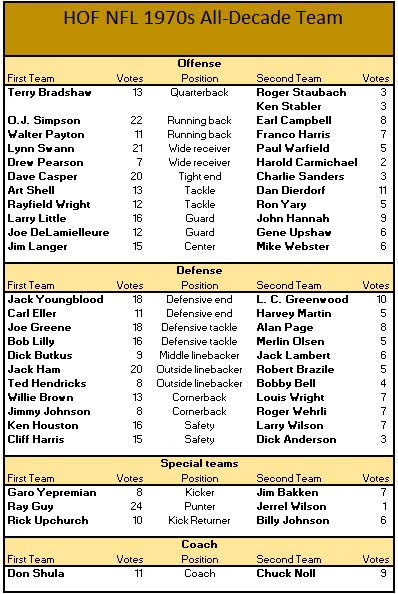 Now, for our picks. Some of them are quibbles, meaning our picks are not 'better' just more fitting in terms of service. Robert Brazile and Bobby Bell were dominant, but both played five seasons in the decade meeting what we think is a fair threshold in terms on years played, but can we say Brazile and Bell's five seasons were better than nine or so seasons from Isiah Robertson and Chris Hanburger?

We post the question more for discussion than anything else. Brazile fits in a 1975-85 All-Decade team and Bell is perfect for both the 1960s and 1965-75 and Robertson, the de facto 1973 NFC Defensive Player of the Year and Hanburger was the 1972 NFC Defensive Player of the Year and both were multi-time First-team All-Pros and had a slew of Pro Bowls. Neither picks are wrong it's just a question of peak value and longevity value within a decade.

Likewise, we think Mel Blount's 1970s decade was slightly ahead of Wille Brown and Jimmy Johnson and though we like Louis Wright, we think he fits better on a 1975-85 team. Again, the official All-Decade Team selections were good, and justifiable but maybe could use just a bit of scrutiny.

We think Alan Page deserved to be First-team in the 1970s and that Bob Lilly and Merlin Olsen were both ideal on the 1960s team and a 1965-75 team. But the 1970s? Lilly was lifted on passing downs in 1973 and 1974 and played just five years of the 1970s. Olsen is a solid pick, playing seven seasons in the seventies, and was a Pro Bowler in six of them. But in an appeal to fairness, we'd have gone with Wally Chambers and Jerry Sherk (or even a Curley Culp).

Chambers tenure was a bit short but from 1973-77 (until knee injury) he was a beast. Sherk was more steady but both were their conference's Defensive Player of the Year in 1976. However, if someone were to insist on Lilly and Olsen as the Second-teamers, fine, but Page and Greene are clear First-teamers.

On the Second-team we replaced Campbell with Chuck Foreman and Larry Wilson with Jake Scott. We put Lemar Parrish in the place of Wright. We also put Claude Humphrey in over Harvey Martin.

Also, we put Cliff Branch and Harold Jackson on the Second-team because we felt they were more productive over the long term than Paul Warfield and Carmichael. Warfield's peak of 1970-74 certainly worthy, but he's another one for the 1965-75 team. Jackson led the NFL in the 1970s in catches, yards, touchdown receptions and was fifth in yards per catch and played well in playoffs. Perhaps playing for three franchises in the decade was some cause to be overlooked when the official team was chosen in 1980.

As for the offensive line, all were fine choices we differ a bit (we put John Hannah on First-team) but the right choices were made. Dan Dierdorf may deserve to be on First-team over Art Shell (the voting was very close) and there is a fifth tackle, George Kunz who is what we would call "All-Decade quality) who gets little notice. In fact, Russ Washington is of that ilk, too. But we, in the end, left the tackles alone. At their peak we might tanke them (1) Dierdorf (2) Wright (3) Yary (4) Shell (5) Kunz and (6) Washington. But again, any order would be defensible.

We moved Butkus out and Jack Lambert up a slot and filled in the Second-team with Willie Lanier. However, Randy Gradishar may be someone we are shorting. Lanier's play dropped off in 1976 and 1977 and then couldn't make the 1978 Colts. Gradishar was not a full-time starter in 1974 (as Lambert was) but was a Pro Bowler in 1975, Second-team All-AFC in 1976, All-Pro in 1977, the 1978 Defensive Player of the Year, and in 1979 was All-Pro again. We reserve the right to rethink this because his peak was likely higher than Lanier. And we did put Lanier on our 1965-75 and Gradishar on the 1975-85 team (along with Lambert) but maybe we are shorting Gradishar because we feel so strongly that he should be in the Hall of Fame we didn't want to appear biased.

Jerrel Wilson had too many punts blocked, so we went with John James was the decade's second-best punter.

We also put Chuck Noll as the first team and Don Shula as the Second-team though Tom Landry should likely be tied with Shula on the Second-team. We put Roger Staubach as First-team and Terry Bradshaw Second-team because of consistency. Yes, Bradshaw won four rings, but Staubach won two and it's a multifactorial process with rings, stats, testimonials, etc. to make these picks. 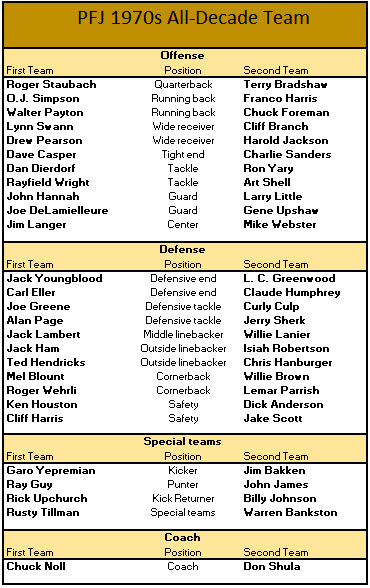 There you have it, food good or ill, our critique of the 1970s NFL All-Decade Team.