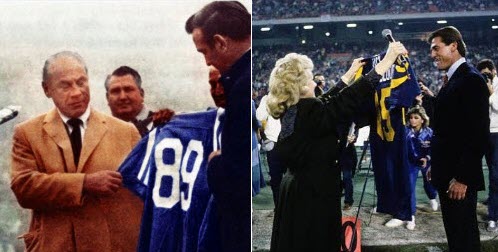 Interestingly the two players, Marchetti and Youngblood, were admirers of each other. When Youngblood came into the NFL he was given game films of the great left ends to learn from and study. Youngblood thought Marchetti was a joy to watch and took much of his style from Marchetti (and teammate Deacon Jones).

Marchetti told us years ago, “I liked Youngblood. I liked the way he rushed the passer and how created havoc in the backfield. In the games I saw, he was great."

Marchetti's coach Weeb Ewbank in the book "Football Greats" said, "The way he played in against the Minnesota Vikings in the 1976 playoffs was the closest I’ve ever seen a defensive end approximate Gino Marchetti. Ron Yary simply couldn’t stop Youngblood, always a menace to the opposing offense, an annual All-Pro and Pro Bowl selection. A guaranteed Hall of Famer.”

Marchetti and Youngblood, two cut from the same cloth in our view.
Posted by John Turney at 10:08 PM