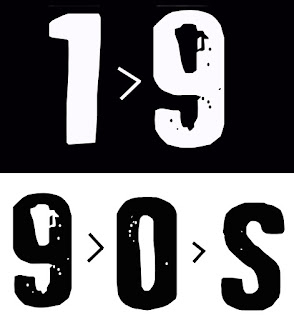 Like the 1980s, the 1990s team is solid all-around and this time there are no three- or four-year types. All played five or more seasons which we think is the minimum to be considered All-Decade.

So, no one gets thrown out for lack of decadienal longevity. 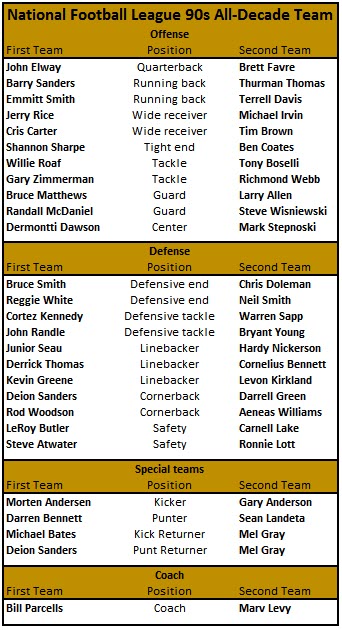 We do have some small quibbles. We'd not have Ronnie Lott as a safety. He was 1980s All-Decade and on our 1985-95 Mid-Decade team, but with so many good safeties in the 1990s and his play in 1993 and 1994 not was it was just a few years earlier we'd go with Eugene Robinson as the top free safety. Robinson was more complete than the others and comes with Proscout, Inc.'s  (PSI) seal of approval for the highest grades of any free safety in the 1990s.

Darren Woodson could make a case to be the Second-team strong safety, though we think Butler and Lake were more versatile in terms of blitzing, Woodson was stellar as a strong-side safety in the 1990s as well.

Junior Seau was always listed as an ILBer for the Chargers, but he wasn't that. He was a weak-side stack backer. But, it's close enough for rock and roll we guess. The Second-team has an inside linebacker and an outside linebacker. There were several good linebackers who would look good on the Second-team, guys who could cover and rush—a Seth Joyner, a William Thomas, or even a Mo Lewis. We'd have arranged them differently, but really, there are no real snubs here.

Sapp played five years and made the Second-team, and was effective for just four of those years. For the 1990s his credentials are a bit light. Henry Thomas would be a good fit next to Randle—a top shade tackle and, like Robinson, comes with scouts endorsement. Chester McGlockton would deserve a good look, too. His 1993-97 work was likely better than Cortez Kennedy's but he tailed off quickly. We also liked Michael Dean Perry because he was so often making tackles for loss.

The coaches are fine, but you do have to ask why two-time Super Bowl winners Jimmy Johnson and Mike Shanahan were overlooked. We would love to see the voting of the panel like we got to see on the 1970s and 1980s teams but the Hall never released the vote count for the 1990s or 2000s.

John Carney may have had a better decade than Morten Andersen, but Andersen's leg so mesmerized people that he wasn't always looked at that closely. But, we'd have likely made him Second-team, so again, it's a quibble.

Punter is hard for the 1990s. The top net punter for the decade was Matt Turk and was All-Pro twice and Second-team All-Pro once in five seasons. Darren Bennett was second and he also played just five seasons in the decade. Rich Camarillo played seven seasons and his net was slightly behind Bennett's and he had the second-best inside-the-twenty to touchback ratio of anyone in the 1990s (behind Bennett).  Landeta was two yards behind the best, had more blocked and allowed about lots of return yards  (also like Bennett) and nine touchdowns so we'd replace him with someone—Camarillo or Turk. Landeta just wasn't worthy of even Second-team 1990s All-Decade.

We'd add a special teamer and it would be Steve Tasker and behind him Bennie Thompson or Elbert Shelley. We'd also add a fullback—Moose Johnston followed by Sam Gash or Howard Griffith.

We'd also find a place for Dave Szott a third Proscout, Inc. "blue player" who always got overlooked. Tim Grunhard also scored high. We might shuffle a couple of other linemen, but this is a good group. At his peak, Larry Allen was the most dominant and it's hard to see him on the Second-team but the others played at a high level longer.

The backs and receivers look good, though some might have a small beef here or there.
Posted by John Turney at 9:30 PM