The 1980s Hall of Fame NFL All-Decade Team was full of dominant players, all worthy of selections. In our view, all but five were qualified in terms of a minimum (our opinion of the number of years needed to be considered for any 'all-decade' team). But, in this case, four of the five played four seasons in the 1980s (Gary Zimmerman, Ted Hendricks, Mel Blount, Rick Upchurch). John Taylor played three so it's more of a quibble compared to a Larry Wilson (three seasons in the seventies) or Earl Campbell (two seasons in the seventies). 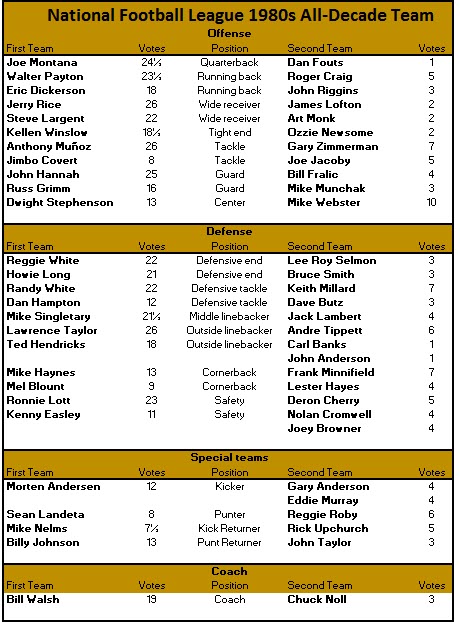 In this post we won't pick a 1980s team, though we may someday, we will just post some critiques and suggestions of ommissions that may fit. As we said, the HOF selection committee really did well this decade.

Montana dominated, but if we were to pick a Second-team it would be Dan Marino. We might have gone with Marcus Allen (ROY, MVP) over Riggins.

At tackle, Jackie Slater and Mike Kenn would look good here in place of Zimmerman.

Reggie White, Lee Roy Selmon and Bruce Smith all played the minimum (in our view) of five years but it does leave out a Mark Gastineau or a Jacob Green or others who had a lower peak that that trio but played closer to the entire decade. The same goes for Keith Millard. A nose tackle (the predominant scheme in the 1980s was a 3-4 and all four of the tackles were 4-3 guys) like Fred Smerlas.

We would replace Jack Lambert (he played the five years but 1984 was barely a season) with Harry Carson and we would also love to know who gave John Anderson (good player but All-Decade?) a vote. We'd move Andre Tippett to the First-team and put Clay Matthews (who you'd think deserved the slot here anyway) on the Second-team.

Mel Blount should be replaced by a Darrell Green or a Hanford Dixon and Hayes moves up. Donnie Shell would likely be a better pick for Second-team strong safety than Joey Browner. Shell was better in coverage, smarter, more instinctive than Browner, who was very good, but Shell better overall.

Nick Lowery was the decade's most accurate kicker, he kicked outdoors on a field with a large rise in the middle, and had good leg on kickoffs. He should be the First-team kicker.

We prefer Roby over Landeta in terms of net punting and in-the-20 to touchback ratio and so on. Ray Guy would be eligible for this team, but Landeta is okay, but he didn't stand out any more than Rich Camarillo. Landeta played only five seasons in the NFL so he was light on longevity.

As for punt and kickoff returners. Lots of picks would work to replace Upchurch and Taylor on the Second-team. Here are the top 20  punt returners in terms of yardage in the1980s. 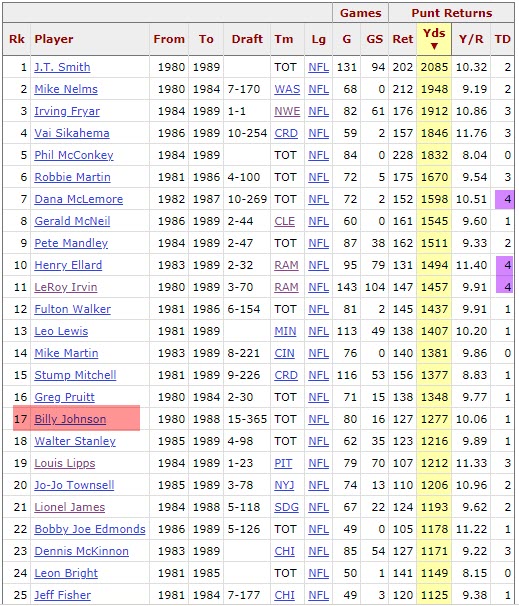 We like to look at touchdowns first, then yards and averages. The highest combination of the key stats is Henry Ellard so we'd go with him, but there are maybe a half-dozen choices that all would work.

For kickoffs here are the top yardage guys with touchdowns highlighted: 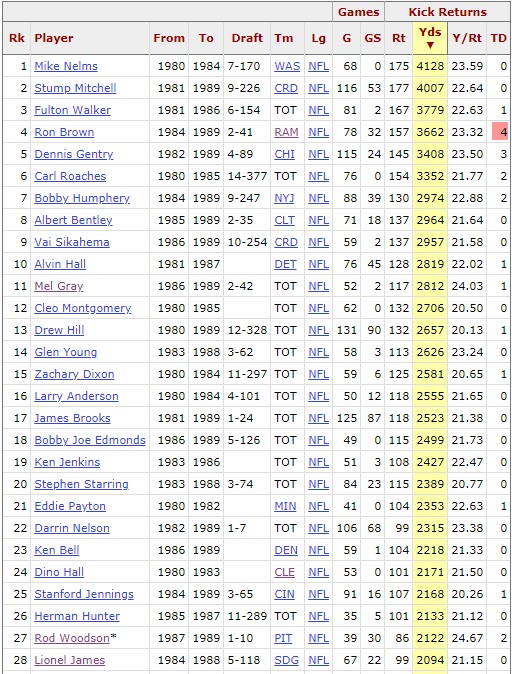 Is another Ram the top guy? Ron Brown had four scores, three in one season but Stump Mitchell or Mike Nelms would work, too.

The official team didn't pick a core special teams player. We would go with Bill Bates and Mosi Tatupu. Ivory Sully would be a solid pick, too.

Finally, we'd have gone with Joe Gibbs on the Second-team over Chuck Noll.