Historical Defensive Player of the Week: 1950 and the Modern Era

The contributors to Pro Football Journal have had more than one discussion over the past couple of years about being able to list who in our opinion would—and that is key: WOULD have been defensive player of the week for each week for the decade of the 1950s. This venture now comes to light based upon having complete game by game stats for the decade, and enough film to cement the choices. Bert Bell and league officials have decided to continue with "free" substitution. 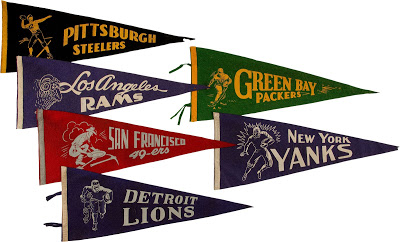 Though there are some players who still go both ways; there are plenty of men who concentrate on the defensive side of the ball in this first year of the modern era. The AAFC is disbanded, yet three teams join the NFL, thus we now thirteen teams and a thirteen week season. 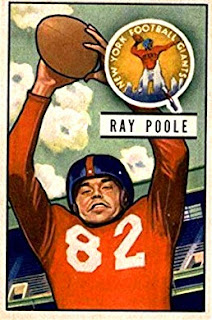 September 17th: The Detroit Lions destroy Tom O'Malley and the Packers 45-7, and you would surmise a Lion would be player of the week? So many defenders play well for Detroit; just cannot pick one. The New York Giants have revitalized the roster with additions from the AAFC, yet it is four-year veteran right defensive end Ray Poole who is player of the week. Giants are down by the strange score of 7-4 when Finks throws an interception to Harmon Rowe of NYG. He scampers back across mid-field and has the ball ripped from his arms. Frank Wydo grabs the loose ball, but Poole takes the ball away from Wydo and trundles 13 yards to the Pittsburgh thirty-seven yard line. Poole flips the ball over his shoulder to Tom Landry and he dashes the rest of the way to score. Poole also recovers another Steeler fumble and dashes 38 yards with the ball. New York wins 18-7. Ray is rewarded for an outstanding season with a trip to Los Angeles for the first pro bowl game. 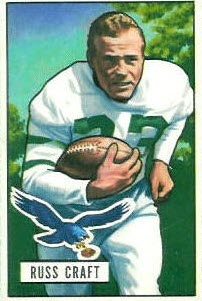 September 24th: The defending league champion Eagles were humiliated by Cleveland. Jim Hardy of the Cardinals throws eight interceptions, and Russ Craft returns his 4 interceptions 57 yards in the Philadelphia 45-7 victory.

Week Three
September 29th: The third week of the season has a Friday night affair in Yankee Stadium. The first place Lions are 2-0, and this version of the Yanks stands at 1-1. Orban "Spec" Sanders was an outstanding runner/passer in his AAFC days, but his bad knees restrict him to defense at age 31. The secondary of New York limits Bobby Layne to an 18.5 passer rating, and the prime culprit is Sanders. He intercepts twice for 17 yards in the 44-21 victory for the now contending Yanks. Sanders in his only season in the NFL also merits being chosen for the Pro Bowl. Sanders ties Frank Seno & Dan Sandifer's record of intercepting in six consecutive games. A record NEVER listed in the league manual (have the memo from Elias stating this should have been corrected years ago). 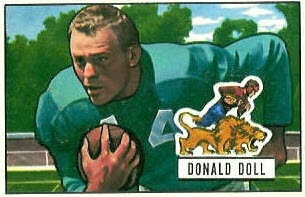 October 8th: One of the best rivalries of the decade was between the 49ers and Lions, and today in their very first encounter Don Doll continues his mastery of pilfering the pigskin as he steals 3 passes for 43 yards as Detroit beats San Francisco 24-7. 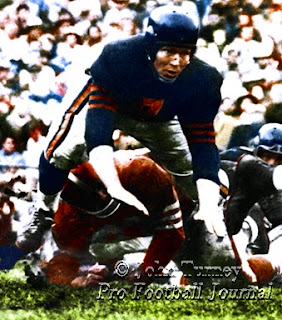 October 15th: The Bears lost earlier in the season to Green Bay, and now must beat their ancient rivals to stay in contention in the National Conference. Paul Christman is at the helm for Green Bay and his passer rating for this game is a dismal 28.6. One of the reasons for his poor performance was the pressure supplied by "The Claw"—right defensive end Ed Sprinkle. He leads a pass rush that records four sacks for 39 yards, and on one of his vicious pass rushes, he records a strip sack. Sprinkle also partially blocks a punt in the 28-14 win (the game was tied 7-7 at the half). Sprinkle also heads to Los Angeles for the Pro Bowl. 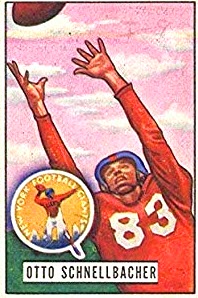 October 22nd: The magnificent machine known as the Cleveland Browns lost to New York already, and in the return match the Browns lead 13-3 at the half. The NYG front seven limits the Browns to just 83 yards rushing, and records 8 sacks for 71 yards. Poole, Duncan and DeRogatis pressure Graham all day, yet the player of the week is right safety Otto Schnellbacher. He steals 3 passes to stop Graham and the Browns. On one of his returns the savvy Schnellbacher laterals to Tunnell for an additional 21 yards to set up a Giant score in the 17-13 win. The Giants are now 4-1, and the Browns 4-2. Folks we have an American Conference race shaping up. 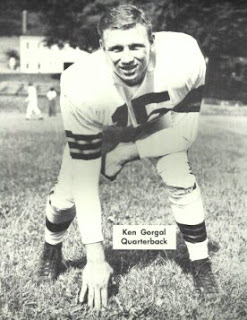 October 29th: Cleveland can also play defense. In fact, the final statistics for the season bear this out as the Browns allow just 2,963 yards, while the Giants are a tad behind at 2,969. Marion Motley has a game for the ages today to pace the offense, but when you win 45-7 someone must be playing defense also. We have co-Players of the Week having graded this film over and over again. Safety Ken Gorgal makes some strong open field tackles, records an interception, and returns a Steeler fumble 15 yards. 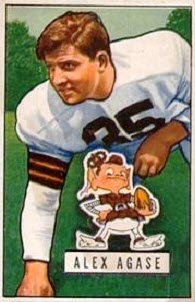 Alex Agase is aligned at middle linebacker, left linebacker, and defensive tackle in the Browns myriad of defenses. He plays standout football at all three. Agase is all over the field in pursuit making tackles. He drifts to his right on his zone drop near the Cleveland goal line to intercept and return 14 yards to further add to his outstanding game. 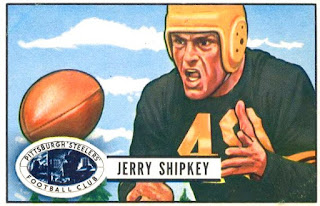 November 5th: Steve Van Buren gained 308 yards on 44 carries in his two games against Pittsburgh in 1949, but today he gains just 79 on 23 attempts. Tommy Thompson cannot complete passes against the black & gold as his passer rating is 26.2 (Mackrides comes off the bench to register a 10.7 passer rating). So, who is leading the charge for Pittsburgh in the 9-7 victory?  Why none other than stalwart linebacker Jerry Shipkey. He pursues and tackles all over the field and intercepts.

Week Nine
November 12th: Philadelphia must beat Washington to have any chance to climb back into contention. The Eagles ravage the Redskin offense in the 33-0 whitewash. Leading the Eagle defense is left linebacker Joe Muha. Washington gains just 127 yards in total offense, and Joe is the leading tackler for Philadelphia. Late in the game, his strip sack of Gilmer is textbook. 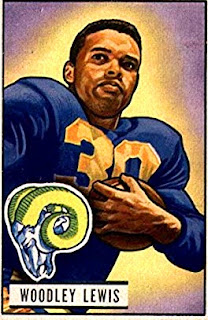 November 19th: The Rams are 7-2, and the Yanks are 6-2; so simply stated the winner stays in contention in the National Conference with the Bears. Rookie Woodley Lewis will not only set the team record for interceptions in a season with 12, but he will also be chosen for the Pro Bowl. First quarter on 2nd and 24 Ratterman fires and Lewis intercepts and returns for 28 yards. Second quarter on 1st and 10, he pilfers Ratterman and returns 18. Finally in the 4th quarter as New York has advanced deep into Ram territory in trying to get back in the hard-fought game Lewis intercepts on the goal line and dashes 24 yards. Los Angeles hangs on to win 43-35.

Week Eleven
November 26th: Snow rings the field in Chicago as the Rams take on the Bears. Second quarter and versatile Pro Bowl bound linebacker George Connor intercepts Waterfield setting up a field goal and a 10-0 lead. Los Angeles had averaged 157 yards rushing in their eight victories, but today Connor and his hard-bitten gang of nasty grizzlies limit the Rams to just 71 yards rushing. Chicago wins 24-14 to stay in first place. 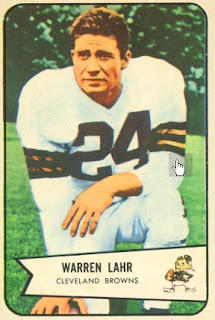 December 3rd: Philadelphia wants to avenge the opening day loss to Cleveland, yet the Browns need a win to keep pace with the Giants. Tommy Thompson is passing against the best secondary in the league using the defensive passer rating as our guide (Cleveland led the league with a mark of 28.7). First quarter and an errant pitch by Thompson is pilfered by left corner Warren Lahr, who weaves his way down the sideline to score from 30 yards out. This is the only Browns touchdown today in the 13-7 victory. 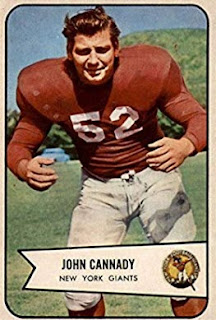 December 10th: Cleveland has won and finishes with a 10-2 record. Can NYG keep pace against the defending league champion Eagles and force a playoff in the American Conference? New York leads 9-0 in the first quarter, but Philadelphia fights back and trails 9-7 at the half. Pro Bowl linebacker John Cannady has been part of the rebuilding process in New York, and he leads his resilient band of Giants to shut the door on Philadelphia in the second half. Cannady is a demon in pursuit and contributes an interception as the "umbrella defense" of New York ties for the conference title.
Posted by TJ Troup at 7:14 AM