When Rams Are in Base Defense Which 3-4 Will We See?

As we've outlined  Wade Phillips uses a 3-4 one-gap scheme and thinks it's better than using a 4-3 one-gap scheme. He installed the 3-4 with the Rams last year, the first time the Rams used a 3-4 since 1990.

In 2018 Phillips added a wrinkle. As the Rams struggled in stopping the run, he tried various things and one, we presume was a second base defense or, more accurately,  the same 3-4 but with different personnel.

This is the normal 3-4 base, used the majority of the time in 2018, when the team was in base (they plays sub defenses more than base).

It has Ndamukong Suh (very poor regular season) at nose, Aaron Donald (the NFL Defensive Player of the Year) at 3-technique (always on weak side), Michael Brockers (injured shoulder much of the season) at 5-tech (always on strong side) as the defensive line.

Here is the usual base with Fowler as the Will. 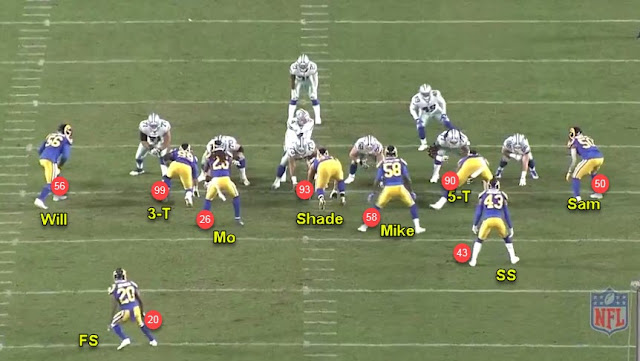 However, the changeup was different in terms of the linebackers, the defensive line remained the same but there were changes in linebackers and secondary. 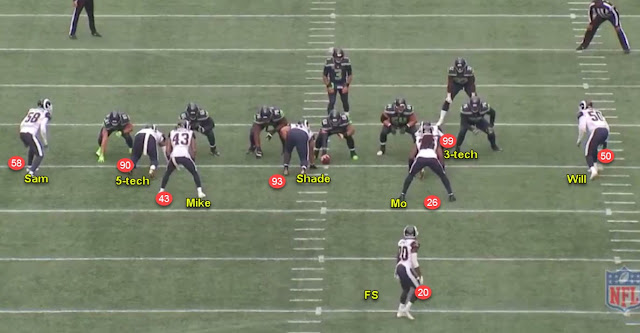 In this iteration, Littleton was the Sam, John Johnson took Littleton's Mike position, Mark Barron remained as the Mo and Ebukam moved to the Will spot.

This is a smaller, quicker group but if teams passed, it lacked an outside rush, which was mitigated when Dante Fowler arrived.

So, with the Patriots using a lot of 21 and 12 personnel in recent weeks and averaging 160.4 yards rushing a game the last eight weeks as opposed to averaging 108.5 the first ten weeks what will we see more of? Will we see the usual base or the lighter base?

It is interesting because the Rams usual base is not a big one, Barron is a converted safety and Littleton was considered undersized to a degree so going with Johnson as a MLBer or strong inside linebacker makes them even smaller, especially with Littleton as a Sam backer.

Or, will we see a de facto 4-3 defense like the Rams used in the regular season meeting with the Saints. Here Longacre is a stand-up DE in a 4-3 stack or "college/Miami" 4-3. 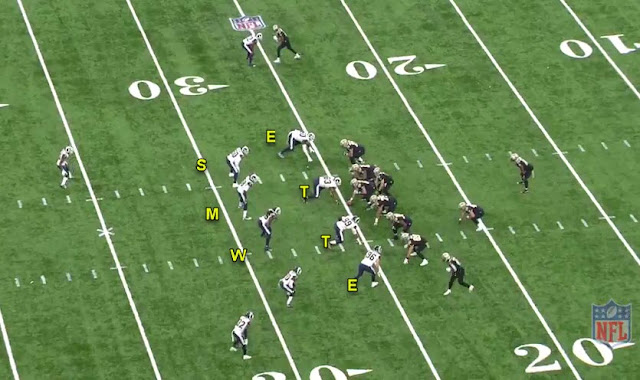 Or we might see a solid front, like this quasi-Bear front. Here Donald is sunk or reduced to an inside shoulder of the guard, rather than his normal outside shoulder alignment and Brockers is head-up on the tackle rather than shaded inside or outside. Suh is also in a 2i alignment, like Donald, out from his usual shade of the center. 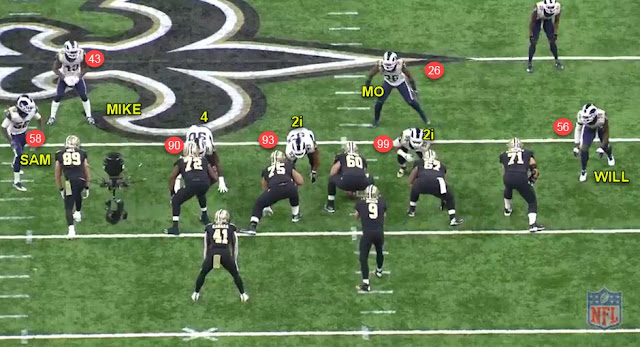 We suspect we may see all the fronts as ways to stop the Patriot running game. The Rams would love to play the run as well as they did in the playoffs and put the Patriots in passing situations where the Rams defensive line can tee off and rush the passer and let the coverage corners match up on the Patriot receivers. We think that's the way they can win, stop the run, rush the passer and perhaps pick off a pass or two.