Has Johnny Hekker Done Enough to be the G.O.A.T? 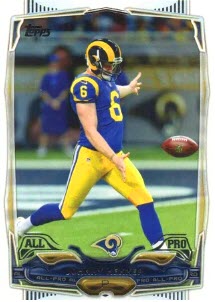 First, picking any one player to be a GOAT (Greatest of All-time) maybe be a dubious exercise, but we all do it anyway. Answers usually vary due to different criteria applied by different folks. With that said, we ask a legitimate question:  Is Johnny Hekker already the best ever?

The only pure punter in the Pro Football Hall of Fame is Ray Guy. Guy was an All-Pro six times and a Second-team All-Pro twice and went to seven Pro Bowls. He was known for tremendous hang time and booming punts.

Here are their honors, side-by-side. 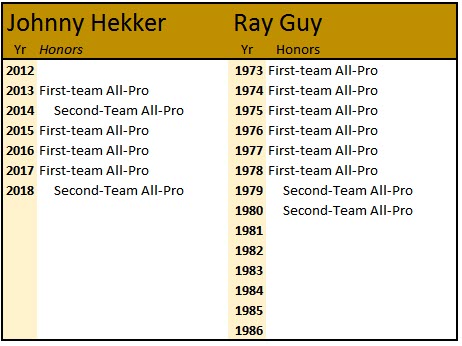 As can be seen, Guy got the bulk of his awards in his first eight seasons but nothing much after 1980. Hekker is close but is still in his prime, so if he keeps up his current pace a bit longer, he could overtake Guy in terms of All-Pro honors, which is one key aspect, but not the only thing when assessing GOATS.

Here are Hekker's and Guys ranks in net punting. Neting punting became official in 1976. However, we've been able to backdate it, with some exeptions by researching gamebooks. We are sure Guy was 2nd in the NFL in neting punting in 1973 and first in 1984. We think he is first in 1975, but we are missing some gamebooks from two teams and until we get to look at them there is a possibility another punter may just edge him from the top spot. We are confident Guy is either first or second however: 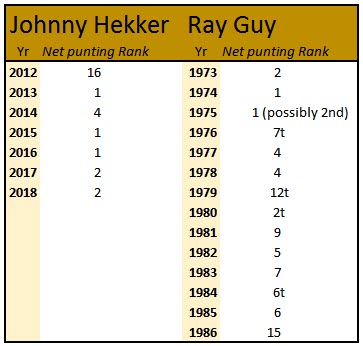 Guy was also always above the league average (his last season being the only exception) in net punting. 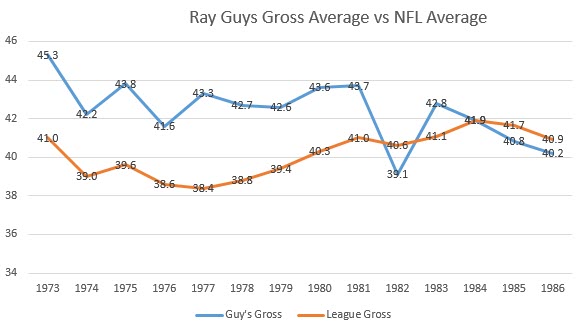 As can be seen, his gross average was usually above the league average.

Punting has become more and more of a science, being refined and improved year after year, so the baseline, the league averages are getting higher. The following chart shows that improvement: 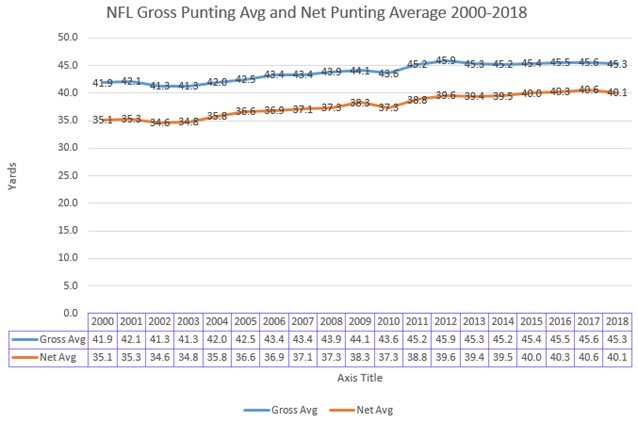 So, when you look at Hekker's averages, compared to the league average, the gap won't look as great, but in fact, to be as much over the average as he is, it is impressive. 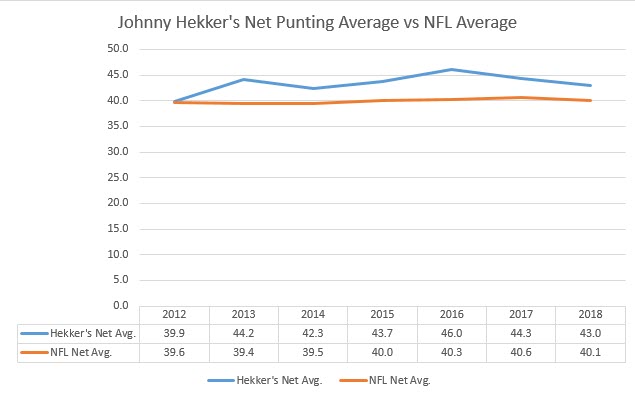 In 2016 Hekker was 5.7 yards above the league net average which is remarkable since the average was 40.3 yards.

The following chart is a bit tedious, but essentially the top line for each player is the NFL averages in key punting statistics for the years they played. The bottom line, of course, is each player's stats. The bottom line is the plus or minus in each category. The main takeaway is the lack of red numbers (representing a value lower than the NFL average) in Hekker's final line.

There are quite a few more stats, but having reviewed and studied punting stats dating back to the 1950s it is our view that Hekker is further ahead of his peers than any other punter (including Guy) in history.

So, that deals with the numbers. The punting numbers, that is. What everyone can see is that Hekker is a true threat to execute a fake punt well. He can run and throw with far more acumen than any other pure punter. Yes, back in the day, quarterbacks often were their team's punter so we are not prepared to say he could run or pass better than Bob Waterfield or even Tom Tupa for example. The question is how often fakes were employed and that we do not know. Tupa's stats on fakes is knowable, but we have not looked through the gamebooks to see how he did. He was clearly a better thrower than Hekker and likely runner, too. But was he as effective in fakes? If he was it was never written about and we didn't see him try and often as Hekker.

The takeaway here is that Hekker is a true threat to not only fake it, but to make it work. And in this day and age, that means a lot. For us, it was the intangible that vaulted him to our All-Pro team when everyone else was picking Michael Dickson. Dickson had a fine year but getting one blocked in Week 17 dropped him a hair and the slot was Hekker's, rightly we think.

The bottom line is that Hekker, after seven seasons, has to be seen as at least even with Ray Guy after his first seven seasons. By that time Guy's All-Pro run was over and he'd go to one more Pro Bowl.

Hekker has more competition for All-Pro honors since, we think, voters pay more attention to stats, especially net punting that they did in 1979-1980, etc. Even with more scrutiny Hekker has been First-team All-Pro four times and Second-team All-Pro twice and has been named to four Pro Bowls.

He's led the NFL in net punting three times, was second-twice and possesses three of the four best seasons ever. He also has four of the top eight, five of the top 15 and seven of the top 30 all time. Here, "All-time" begins in 1976 when the NFL officially began to keep net punting average as a statistic. We've explored previous seasons and have lots of data and think only Sam Baker's 42.8 net average in 1959 and possibly Bobby Joe Green's 1961 season would qualify for this list. 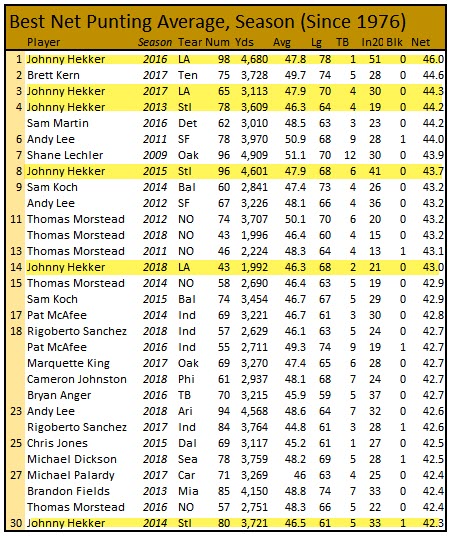 Here are Hekker's ranks is some of the key stats:

Here are his career stats:

Other considerations are punting conditions. Hekker was blessed to play half his games indoors when he was in St. Louis and the Los Angeles weather is also not any kind of hinderance like the punters who play outdoors in cold-weather cities. So, that is one strike against Hekker, but honestly, that's the only negative we can find. Guy played in Oakland and Los Angeles, so he had good weather and got one game a year in Denver, which was a bit of a bonus.

Time will tell, but as the Rams travel to Atlanta for Super Bowl LIII we feel confident Hekker will get plenty of media notice based on his punting and faking skills as a true weapon for the Rams.