BEGINNING OF A NEW YEAR: The Playoffs 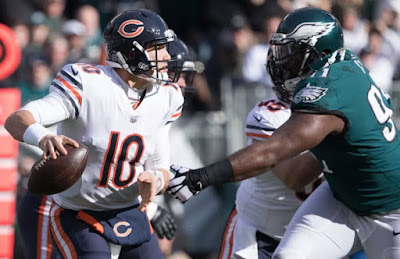 A new year and what promises to be a very exciting set of playoff games. Pete Rozelle and his staff came up with a new format to the playoffs when the merger began in 1970—the "wild card" team. Having watched and researched every season since the wild card format began, there is one fact that stands head and shoulders above all others.

There has been at least ONE ROAD VICTORY EVERY YEAR since 1970. All the teams fight hard to get the home field, yet at least one will drink from a loser's cup during the playoffs, and many seasons more than one. So who has the best chance of winning on the road this weekend? Boy oh boy that is a very difficult question to answer, and looking at the Vegas odds for all four games with the home teams as small favorites is a real challenge. Should be some compelling football on Saturday and Sunday.

Reading every site online would take all day, yet do spend time reading ESPN and Sports Illustrated. These folks must know something about football otherwise they would not have jobs right? There are times though when these folks make foolish statements that are very narrow in their view. An example you ask? Last week Gary Gramling at SI stated, "the passer rating is outdated to the point of uselessness due to the overemphasis on avoiding turnovers and everyone should stop citing it."   Everyone Gary?

There is no one definitive statistic that always correlates to winning, yet the passer rating is a tool that has sure served me well. Possibly he does not understand what the passer rating actually tells us. Over the years have had many a detailed conversation with men that know the game well. They have all shared their views of this statistic, and have been fortunate to adjust my thinking on the four parts of the equation.

Two of the most improved teams in the league this season reside in Cleveland and Chicago, and they rank fifth, and first respectfully in this category. Two of the five bottom-ranked teams are looking for new head coaches (Tampa Bay and Green Bay), while Oakland, San Francisco, and Detroit all may be evaluating their defensive staffs.

The evolution in offensive football since the 1950s is a fascinating subject for me. Then, of course, is the adjustment of the defense to counter offensive strategy. The last game this coming weekend will be the fourth time the Eagles and Bears have faced each other in the playoffs. The defending Super Bowl champions against a team that no one would have ever dreamed would win twelve games. The Bears led the league in the defensive passer rating with a mark of 72.9 (league average is 92.9).

The navy blue and burnt orange Bears also made the turnovers count. All the factors apply here: ie; pass rush, disciplined complex combination zone and man coverages by Vic Fangio, and physically talented tough men to execute these factors. Can they limit Foles and the Eagles passing game? Historically the Bears have not had many quarterbacks—they have had "snap takers". Is young Mitch a quarterback? Guess we will find out soon?

What the Bears do have is a history of running backs who could, and did pound out the yards on the ground, and will end this story with a stat that may take center stage on Sunday. During his three years in the league when Jordan Howard gains 100 yards rushing in a game the Bears record stands at 8-6. Not exactly overwhelming, yet when he does not gain 100 yards rushing the Bears record is 12-22.
Posted by TJ Troup at 3:59 AM