Food For Thought for HOF Selectors

The Hall of Fame selection process has never been more politicized, need evidence, many of the talked about owner candidates are directly tied to making financial contributions to the Hall.  The Senior selection process seems to be highly influenced by players who have recently passed; see Les Richter and Kenny Stabler.

And of course, the regular selection process isn’t free of politics either, seen with Lynn Swann’s stumping for teammate John Stallworth during his own acceptance speech. But more and more, there’s little excuse for selectors making unwise choices. There is now so much information out there and available to make wise choices, however, voters choose to balance the stats, the honors and the eyeball test they no longer need to be reliant on the research and presentations of the presenters.

We all know we’ll be seeing Ed Reed and Tony Gonzales on the stage in Canton this Summer, but after that, there are lots of questions. One of those is whether one of the two cornerback’s will make the grade. On its face, the case for each seems very very similar, see below. 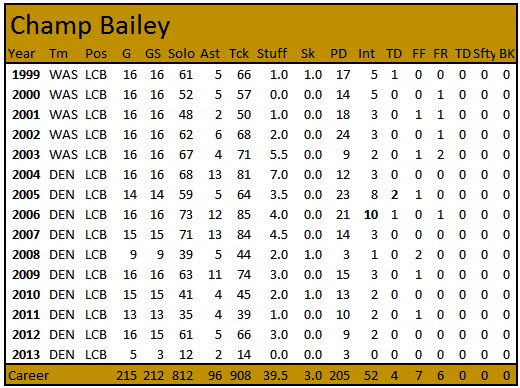 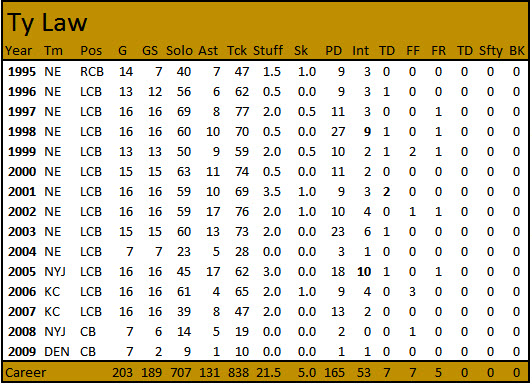 We think the popular opinion would favor Champ Bailey over Ty Law, but we at the Journal want the voters to at least tap the brakes on that.

The table and the stat charts above view these performers through the most common lens, but why judge a cornerback on interceptions (the common view) when each man averaged just 3.5 per season and a typical season has these players facing 500 passing plays? We believe that during the era these were playing the most complete way to measure the value of a cornerback is based on their value in pass coverage, and that favors Law.

The chart below compares the individual passer rating for each player: 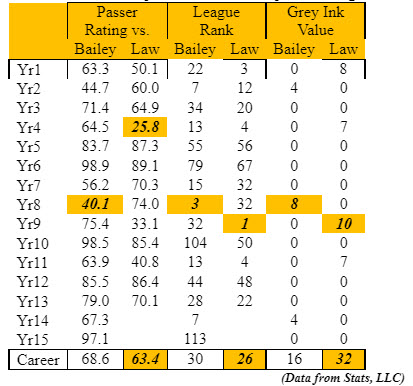 Law’s career passing rating, when targeted, was lower than Bailey’s, his average league rank was better and his ‘Grey Ink’ number—(the Bill James approach) to reward true greatness, best in the league gets 10 points, 2nd best gets 9, 3rd gets 8 . . . . 10th gets 1 and 11+ gets 0—really prefers Law.

But sometimes a picture tells a thousand words: 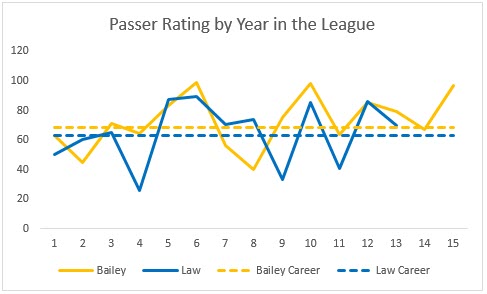 But, of course,  numbers are not everything and the individual passer rating versus cornerbacks is but one of the 'numbers' to consider.  As presented earlier Bailey’s awards and recognition do outweigh Law’s. Though certainly for the All-2000’s team Bailey benefitted—as most players do—from still being active when the team was selected; out of sight, out of mind (remember what we said about Richter and Stabler).

So, we’re down to the eyeball test.

It’s hard to argue that Bailey didn’t look the part, but much like Sugar Ray Leonard and Marvin Hagler in the 80s, Bailey benefitted from how smooth he looked, should we be electing for the HOF based on style points. In fact, I’d argue that the eye test should favor Law the tougher more physical presence. Somewhere we decided that DTs should be tough, and play like it, OGs should be tough and play like it, but WR’s should be smooth (Lynn Swann, now OBJ) and CBs the same.

But the eye test isn’t about reinforcing stereotypes but rather what your eyes tell you about a players’ effectiveness, and Ty Law had a physicality that was rare among NFL cornerbacks of his era, he didn’t make “business decisions”.

In their great book “Games That Changed the Game” Ron Jaworski and Greg Cosell describes Law and his compatriot Lawyer Milloy as, “defensive backs that were physical and tough, with the versatility to defend the run at the line of scrimmage and execute their responsibility in pass coverage.” Jaws and the man who’s possibly seen more football film than anyone Greg Cosell couldn’t have appreciated the value of Law more.

Finally, let’s deal with an elephant in the room.  In a conversation with Hall of Famer Dave Robinson, he emphasized that everyone is equal in the Hall, there are no insiders and outsiders.  But we know there are first-ballot guys and others.  Here is the list of first-ballot CBs in HOF history: 1) Willie Brown, 2) Mel Blount, 3) Darrell Green, 4) Rod Woodson, 5) Deion Sanders, we would argue that Bailey is no Blount, Woodson or Deion. The CBs who had to wait: Night Train Lane (possibly the best ever), Lem Barney, Herb Adderley, Mike Haynes, etc.

We one hundred percent believe Champ Bailey is a Hall-worthy CB, but we also believe that Law is also and that Bailey is not a sure-fire first-ballot player in the sense some others are. In fact, in the passer rating against era (roughly 1995 to date) the CB right behind Bailey in passer rating against is Aeneas Williams, a HOFer of course, but also understand that Williams had to wait five years for induction. We put our support fully behind Ty Law and look forward to seeing him in a gold jacket this summer and that Bailey will get his jacket very, very soon thereafter. At least, that's our hope.
Posted by John Turney at 8:43 PM