TUESDAY TIDBITS: The Most Anticipated Weekend of the Season. 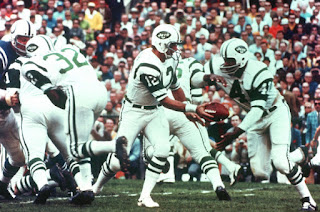 Words have meaning, and as such when thinking of a title for this week's column—thought about using the word best instead of anticipated. Problem is we don't know how competitive the games will be? Can easily write about league history (my wheelhouse), and so will start there and tie into the first game on Saturday.

January 12th, 1969 is a day that for those of us that watched the game will remember forever. Some folks have attempted to re-evaluate the game since the Jets won convincingly. How strong were they really? Were the Colts over rated? etc. The aftermath is fascinating due to Shula leaving and what he built in Miami, but this segment is about the Colts and Chiefs. Monday night football in 1970 week two brings two veterans (old) quarterbacks onto the national TV screen; Len Dawson and Johnny Unitas.

The Kansas City defense led by Bobby Bell and hopefully future Hall of Famer Johnny Robinson(his best game ever) crushed Baltimore. The Chiefs did not make the play-offs in '70, and Baltimore rebounded to win it all.

Over the last forty-nine years these teams have not met that often in the regular season, but in the playoffs, it has been all Colts. Much will be written this week about two quarterbacks that combined for 89 touchdown passes during the regular season. Evaluating the Chiefs defense does not take long, and coach Reich and his staff will no doubt have a game plan that looks to feast against Kansas City both in the air and on the ground.

The Chiefs have allowed 388 yards a game on defense and given the ball away nine times in the games they have won. They have proven they can get to the quarterback, yet the Colts outstanding o-line does not give up sacks very often. When Kansas City loses they allow a whopping 456 yards a game, and have given away the ball nine times. Kansas City had a defensive passer rating of 92.7 which is basically the league average.

If the Chiefs advance, they will be the worst defense ever to advance to a championship game, and if they lose again to the Colts at home due to a balanced Indianapolis attack—well we all know what will be written concerning Andy Reid, and Bob Sutton. Lance Alworth is 78 years old, and he was one of the many offensive heroes against a Patriots defense in '63. Next Sunday in Foxboro many questions will be answered concerning just how strong is the 2018 version of New England? We all know the names of the main men, and the successful history of this team since 2001—can they do it again?

Gus Bradley's "out of the box" defensive game plan for the Ravens was well executed; yet the question is simple? You got one for Tommy B.? Then almost as important, can your young defenders make it work?

My apologies to Saints & Eagles fans, as this column does not have anything for you. That does not mean I will pass up this game; by the fourth playoff game who knows how many Dr. Pepper's I will have had to go with my smokehouse almonds. 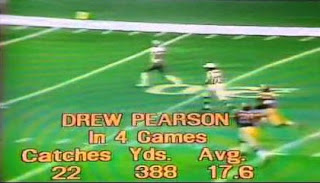 Will end with the Cowboys and Rams, and boy oh boy lots to share here. So much is perspective, and where to begin? The 1962 Rams are one of the worst teams of the decade of the '60's and were very poorly coached. The '62 Cowboys could not stop anyone as they continued to struggle under brilliant dedicated Tom Landry. 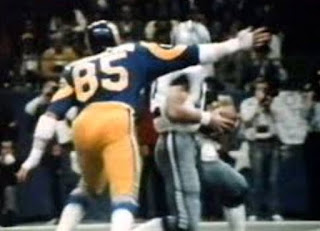 Dallas easily beat Los Angeles in '62 in one of the few victories they had that year. Boy did that change in the '70's & '80's as they met many times in the play-offs(eight times in thirteen years). Can you hear the NFL Films music? Picture Jack Youngblood sailing over Roger Staubach, Eric Dickerson pulling away from the Cowboy defensive backs, and finally Roger the Dodger flipping to a wide-open Preston Pearson for his diving catch in the end zone.

Living in Orange County for over 50 years and having so many friends that were Rams fans—they HATED Dallas (and to a lesser extent Minnesota). January 7th, 1979 and we are looking live at the Coliseum as Brent use to say for the NFC Championship.

The defending SB Champion Cowboys look to avenge the regular season loss to the Rams, and join the great teams of all-time by taking home the silver trophy for a second consecutive season. Can shut my eyes and picture my girl friend at the time in her Ram t-shirt so genuinely excited to see her boy Jack Youngblood and the rest of her heroes beat the damn Cowboys.

This is early in my coaching career, and of course, I rambled on about tendencies, nuances, and match-ups—not sure if Susan Emily heard a word I said? Half-time and is zero, zero. Los Angeles survived the first half, and was all Dallas in the second half. Hollywood Henderson prances, and I mean PRANCES 68 yards for a score with an interception, beguiling the Rams with his finger to chase him.

Yes, Susan Emily had a tears in her eyes at the close of the game, and could not console her with the fact that my boys in black & gold with former Colonist Gerry Mullins would destroy Dallas to win the trophy. Ok, story time down memory lane over.

McVay will have an offensive game plan for the Cowboys that they have not seen this year, and though Kris Richard will try and have his boys ready—this will be a daunting task. Wade Phillips has a pass rush, but can they limit Zeke on the ground? If Dallas is trailing by over a touchdown late do they keep feeding him the ball? Both teams are very average on pass defense: Dallas 95.7 and Los Angeles 93.7 so which secondary rises to the occasion and pilfers a few passes? Should be a fun weekend of football; get the Dr. Pepper ready?
Posted by TJ Troup at 4:25 AM