DEFENSIVE PLAYER OF THE WEEK 1952: Newcomers Take Their Place Among the Elite.

Today is my listing of the defensive players of the week for 1952: Chose today since it is Randy Gradishar's birthday, and am of the firm belief he should be enshrined in Canton.

That said, let's take a look at the 1952 Defensive Players of the Week—

WEEK ONE
September 28th: The Browns seeking revenge for the title game loss to the Rams opens the season against Los Angeles with a 37-7 win. Right corner Tommy James intercepts both Van Brocklin & Waterfield in the first half(these two passers ranked #1 & #2 in the passer rating in '51). Cleveland builds an insurmountable lead as both Ram quarterbacks finish with a passer rating of 0.0! 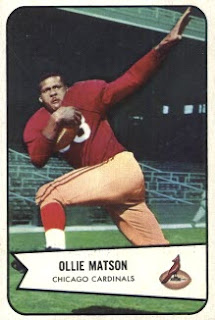 October 5th: The starting right corner for the Cardinals is rookie Ollie Matson. The Cardinals trail 10-7 when the former Olympic medalist returns a Bear kick-off for a touchdown. He shows strong ability in defending the run as the film shows him tackling both Dottley and Hunsinger with physical tackles. The Bears attempt at a comeback win is foiled when Ollie rips the ball away from a Bear and dashes into the end zone with his fumble return touchdown in the 21-10 victory. 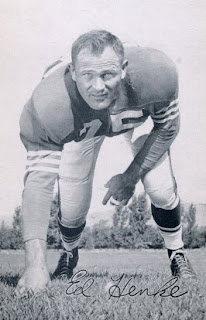 October 12th: San Francisco was the hottest team down the stretch in 1951, and in their late-season victories they beat Detroit twice. The opening day win over the Lions at Kezar is impressive, yet today we are at Briggs Stadium, and you just don't beat a Buddy Parker team four times in a row. Do you? Oh, a 28-0 shellacking on the road serves notice to the league that the 49ers are for real. When a team pitches a shut-out many men contribute, yet two 49ers stand-out today. Rawboned rangy left defensive end Ed Henke plays the outside run well, hustles on special teams (impressive open field tackle), and helps pillage the Lion pass pocket for 5 sacks. Ed also forces Layne to throw early as he rockets in from his stand-up stance.
The other co-Player of the Week is undersized linebacker Hardy Brown. San Francisco aligns in an over shifted 5-2, and when the ball is on the hash linebacker Don Burke plays the wide side of the field, while Hardy is aligned near the middle of the offensive formation. Hardy makes numerous tackles and hits with his technique known as the "the Humper". Brown drives his should into ball carriers and receivers, and almost always drops them in their tracks. His open field "Humper" on Bobby Layne late in the game is a classic. Detroit gains just 40 yards rushing the entire game.

WEEK FOUR
October 19th: Len Ford can never match his season of 1951, yet his game against Philadelphia is a true testament that he is the premier defensive lineman in the game. The Eagles gain just 45 yards rushing, and since one of the running plays is a 36 yard gain by Don Stevens—Philly gains just 9 yards on their other 20 running plays. Len leads a pass rush that garners 6 sacks, and he recovers two Eagle fumbles in the 49-7 win. 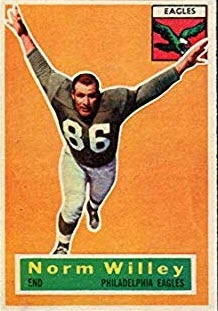 October 26th: No one knows who holds the record for most sacks in a game. Paul Lionel Zimmerman (Dr. Z) shared his thoughts with me and many others about this game and his personal notes record that Norm Willey had 8 sacks and Pete Pihos had 4 and two other players had the other two as the Eagles had 14 sacks for 127 yards in losses in the 14-10 victory over the Giants.
As such we again have co-Defensive Players of the week. Left end Pete Pihos & right end Norm Willey 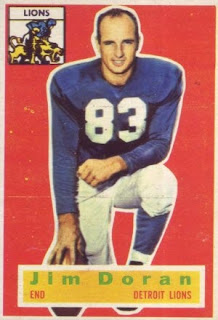 WEEK SEVEN
November 9th: Right defensive end Andy Robustelli returns an errant Dallas Texan pass 14 yards for a touchdown, and leads a pass rush that garners 6 sacks in the 27-6 victory. Los Angeles is coming on strong, yet needs to win out to have any chance of winning the division. 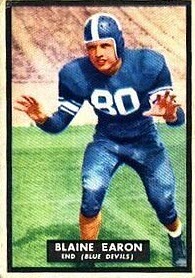 November 16th: Lean rookie right defensive end Blaine Earon is not a household name, not even in Detroit, yet the youngster helps his teammates limit the Dallas Texans to just 68 yards rushing in the 43-13 demolition of Dallas. Earon also recovers a fumble, the first of 5 he will recover down the stretch as the Lions take aim at a division title.

WEEK NINE
November 23rd: Who do the Texans play today? Why the up and coming Green Bay Packers. Ace Loomis pilfers two Texan tosses (he returns them 78 yards, including one for a touchdown). The Packers are now 6-3 and have designs on being a factor in the division race late in the season. 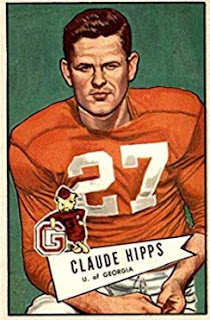 November 30th: The Steelers score 63 points! Ok, the black & gold never score like this, but someone had to play strong defense since New York scored just 7. Safety Claude Hipps intercepts 3 times (he returns them 31 yards) to keep getting the ball for Jim Finks and the offense.

WEEK ELEVEN
December 7th: While a case can be made for Richard Lane as defensive player of the week (more on him soon), the defensive player of the week is second-year right corner Jack Butler of the Steelers. San Francisco has fallen from contention and gets soundly thrashed at home in Kezar 24-7. The strong Niner ground game gains just 70 (Butler's strong run support is always a factor), but his 2 interceptions are key to the win (he returns them 29 yards). Two wins in a row for Pittsburgh and now they travel south to Los Angeles in their quest for three in a row to end the season and deny Los Angeles a tie for the conference crown.

WEEK TWELVE
December 14th: Unheralded rookie right corner Night Train Lane has now intercepted 11 passes in his last eight games of the year. His three thefts helped beat Green Bay on December 7th. No one ever intercepts three passes in back to back games, right? Oh, this cool cat from Austin Texas, who played junior college ball at that football powerhouse Scottsbluff in Nebraska is not just anyone?

First quarter and Pittsburgh faces 3rd and 20; as Finks passes and Richard Lane intercepts and returns 12 yards. Rams drive deep but are denied at the goal line. Second quarter, and on 2nd and 10 Finks throws to his left, and Lane knifes in front of the receiver and speeds 42 yards to score for the Rams. Third quarter and Pittsburgh is on the Los Angeles twenty-one yard line as Finks fires again, and Lane intercepts again. This time on his own eight-yard line. He returns 12 yards.

The Rams offense drives eighty, and scores to put the game out of reach. Buddy Morrow sings about the "Night Train", and that is his nickname now and forever for the defensive player of the year. Lane has now recorded 14 interceptions in the last nine games to set a league record that still stands, and the Rams have won eight in a row to tie Detroit for the division title. In closing this saga; sure appreciate the comments at the end of my last story, and hope there is more of the same.
Posted by TJ Troup at 7:43 AM