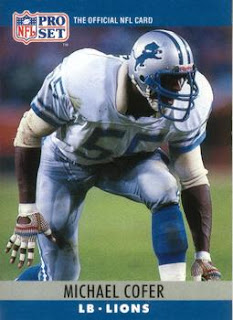 The 1980s were a decade that made it difficult for outside linebackers to make a lot of All-Pro or Pro Bowl teams unless your name was Lawrence Taylor or Andre Tippett. Sure, others made some just maybe not as often as they otherwise would have if super-dominant players like Taylor were around.

Mike Cofer was one of those 'backers. He did make Second-team All-Pro in 1988 and 1990 and was Second-team All-NFC as well in those years, adding in a Pro Bowl in 1988 for good measure.

He began his career was a 4-3 defensive end playing the right side as a rookie and left end as a second-year player and then when Lions joined the 3-4 revolution (one of the last teams to convert) Cofer moved to the right outside linebacker for the rest of his career.

Cofer passed away last week from complications of a rare disease called amyloidosis. Cofer was 58.

Cofer ended his career with 62.5 sacks and averaged 9½ sacks from 1986-90. He was known as a high-effort player, a hustle-type who didn't take plays off. He did suffer from injuries with four of his ten NFL seasons ending early due to various ailments.

NFL draft guru Joel Buchsbaum thought Cofer was a bit of a reach, taken in the third round of the 1983 NFL draft but Cofer was 6-4 and 230 or so pounds but very fast, reported times were in the 4.6 and 4.7 range in the forty-yard dash.

It was a pretty deep draft for linebackers, so Buchsbaum's feelings may have been warranted. However, the Lions felt that Cofer's skills and instincts resembled those of Fred Dean and the plans, according to media reports of the time, were to beef Cofer up to 245 pounds and play defensive end which did happen, until the aforementioned move to linebacker. 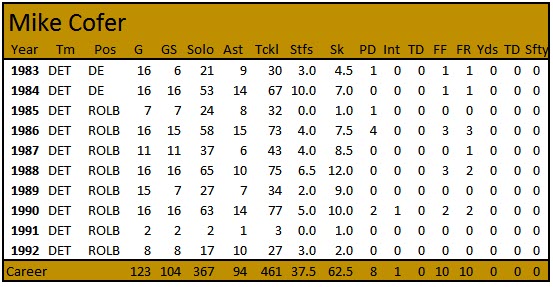