Excerpt from: The Birth of Football's Modern 4-3 Defense: The Seven Seasons That Changed the NFL

LOOKING BACK
by TJ Troup 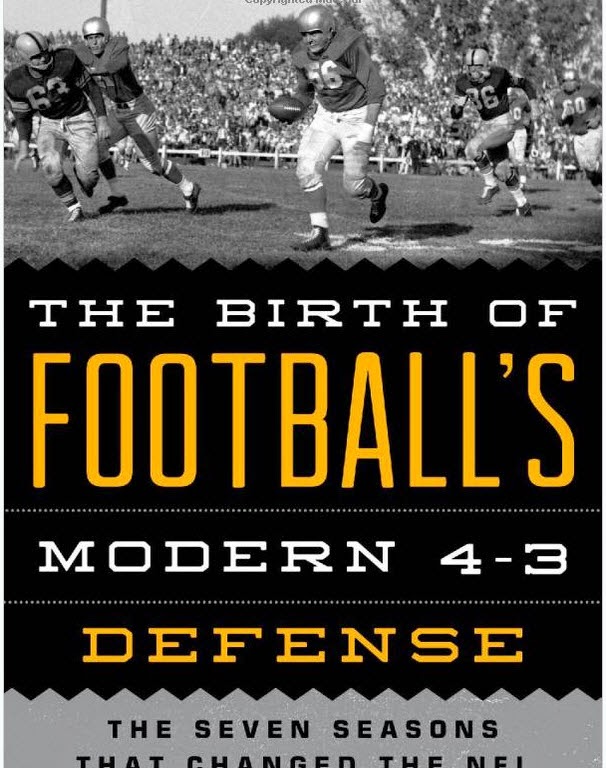 TAKING FLIGHT: The 1952 Pittsburgh Steelers
Pittsburgh won their final game in 1951 with defensive back Jim Finks in at tailback (in a spread passing formation), was going to happen in the Steel City. Joe Bach returns to pro football as head coach, and on his staff Cherundolo, Kiesling, Molesworth; and most importantly backfield coach Gus Dorais. ability to teach the passing game, and his understanding of how to attack a defense translated into a new dimension for a franchise that heretofore was known only for smash mouth football in the single-wing.

Since the quarterback, and both halfbacks earned a berth in the pro bowl his only season with the Steelers (health issues ended his time in Pittsburgh) would be considered a success. Defensively the Steelers aligned in a 5-3-3, with man coverage. Out of necessity Pittsburgh would go to a 5-2-4 with a lead late in the game. Offensively the Steelers align in the standard double-closed end set with a full house backfield, yet also wing, slot, and flanker sets motion. They will keep a closed end in to pass block (max protection), and at times go to a spread formation with multiple receiver combinations.

PERSONNEL: Thirty five men take the field in 1952 (15 rookies make the team), with only one player at the age of 30 (Captain Elbie Nickel). Jack Butler is a strong run defender at  (also plays end on offense), and an improving pass defender who just needs experience. Ed Kissell is a hustling safety until injury ends his season. Rookie Claude Hipps begins the campaign at left corner, then moves to safety for a baptism by fire. Veteran Howard Hartley is the nominal starter in his final season at left corner for most of the year. Making the Pro Bowl for the first time is right defensive end Bill McPeak. He demonstrates all the traits you would want , and had a very bright future. Joining McPeak in the Pro Bowl is right defensive tackle Ernie Stautner. Strong at the point of attack, and relentless in pursuit he is on his way to a legendary career.

Middle guard is lean, long legged Dale Dodrill who earns some All-pro recognition. Though he struggles at defeating the drive and double team block due to his lack of heft, he also shines in pursuit. has an outstanding year on special teams; especially in returning blocked field goal attempts. Lou Ferry is a rock at left defensive tackle, and gives a consistent performance each and every week. Left defensive end is shared by veteran George Hays (final season), and rookie George Tarasovic (also plays both outside linebacker positions). Right linebacker is the province of veteran Frank Sinkovitz in his final campaign. Frank is adequate on the red dog, tackling in the open field, and in man coverage.

Middle linebacker is handled by stumpy Darrell Hogan. A willing run defender, yet he is overpowered too many times during the year. He is at times deployed to the wide side of the field in a walk-off alignment leaving Dodrill isolated against three blockers. Though he is attacked in the passing game due to his height, he can make a key interception since he takes excellent angles to the ball. is also sent the red dog in a movement with Dodrill to create pressure. Tom Calvin will sometimes enter the game in an obvious passing situation as the middle linebackeralso plays halfback on offense, and some defensive halfback). The left linebacker and first team all-pro is Jerry Shipkey. Strong in all facets of linebacker play, he earns his third and final trip to Los Angeles for the Pro Bowl. Rookies George and Dick Hensley share the left end position on offense for Pittsburgh. Until he is injured Sulima proves to be an adequate receiver, and pass blocker in max protection schemes. Hensley has an outstanding game against the Giants in late November, otherwise he does not catch many passes (also plays left defensive end). John "Bull" Schweder begins the year as the starting left tackle and moves to left guard when undersized Rudy Andabaker goes into the military, thus the final six weeks of the campaign Earl Murray is the starting left offensive tacklealso plays defensive right tackle opening day).

Bill Walsh receives some All-pro recognition for his fine work at , while Pete Ladygo starts at right guard. George Hughes is the starting right tackle. The undersized offensive line struggles in blocking for the inside run, and gives up 36 sacks (24 in the seven losses) during the year. Whether is aligned in close, flexed, or in the slot Elbie Nickel is one of the most sure handed receivers in the league. His pro bowl season is capped with a team record setting performance of 10 catches for 202 yards against the Rams. Nickel is the leader of the team, and a true professional. Expectations are mighty for first round draft pick Ed Modzelewski, and though he runs hard, he just does not break tackles in a disappointing rookie performance. Fran Rogel plugs away, yet he also is not nifty in the open field, though early in the year he is a definite threat in the passing game. Lynn Chandnois is the best in the league at returning a , excellent at running a sweep or off tackle play, and a definite threat in the passing game due to his speed and cutting ability. He is selected for his first pro bowl. Ray Mathews ranks with the best in the league at returning a punt, can break a tackle in the open field as an outside running threat, and is dead accurate as a passer on option plays either left or right. He is a game-breaker in the passing game with a knack for finding the end zone, thus he is also chosen for the Pro Bowl. Jim Finks leads the league in touchdown passes thrown from his quarterback positionalso plays defensive back in obvious passing situations). Excellent touch on the deep ball, mobile enough to roll out and buy time to find the open receiver-his outstanding performance earns him a trip to Los Angeles.

GAME OF SIGNIFICANCE: Beginning the year with four losses, the black & gold clad Steelers have won five of their last seven; including impressive victories over the Giants and 49ers. The defending league champion Los Angeles Rams are the hottest team in the league with seven straight wins, and need a win today to tie the Lions for the conference title. The largest crowd to ever see Pittsburgh play (71,310) are on hand in the Coliseum. The table is set; now for the main course. Bob Waterfield is retiring and the home crowd responds boisterously him as he meets captain Elbie Nickel for the coin toss.

1st Quarter: Though both teams moved the ball, neither could find the end zone.

2nd Quarter: Fran Rogel's fumble is recovered by left defensive end Larry Brink to end a promising drive on the Ram five yard line. Norm Van Brocklin engineers a 95 yard drive to pay dirt in 10 plays. The highlights of the drive are completions in the right flat to Vitamin Smith for 22 yards, and Skeets Quinlan for 19 yards the left flat as the Dutchman exploits the Steelers pass defense alignment. Fears catches Van Brocklin's pass and scores after sidestepping Jack Butler on the 10 yard touchdown toss. Left linebacker Tank Younger intercepts Finks first down pass, and the Rams advance to the Steeler six yard line. George Tarasovic blocks Waterfield's field goal attempt and Dale Dodrill with a wall of blockers returns the ball to the Ram nine yard line before a hustling Dan Towler takes him to the turf with a face mask grabbing tackleDodrill's helmet is ripped off). The Los Angeles defense outstanding football the last seven weeks, and continues today with a goal line stand. Late in the quarter Finks on a second and ten-play from his own forty yard line throws towards Ray Mathews on an out pattern and rookie Richard "Night Train" Lane in front of the receiver and gallops 42 yards for a touchdown with just 28 seconds left in the half! Los Angeles 14 Pittsburgh 0.

3rd Quarter: Bob Waterfield misfires deep in as middle linebacker Darrell Hogan scores on a 15 yard interception return. The Rams punt to Pittsburgh, and here comes the black & gold down the field. First and on the Los Angeles twenty-one Finks again throws his left and again the Night Train makes him pay as he intercepts on the eight yard-line. Lane has now set a new league record with his 14th interception (all in the last nine games). Los Angeles gained 245 yards in the first half; can they continue their offensive dynamics? 2nd and eight on their own thirty-five yard line; Van Brocklin avoids Tarasovic's pass rush, and fires over the middle to Hirsch. Hirsch crazy way 65 yards to score as he pulls away from from Hipps and Butler. Rams 21 Steelers 7. The Rams start on their own twenty-five yard line and as the quarter comes to a close they are on the Steeler five yard line.

4th Quarter: 3rd and goal on the five as Tom Fears an out pattern in the end zone and grabs Van Brocklin's well thrown pass to up the lead to 28-7. Finks will drive the Steelers 80 yards as he completes passes for 45 & 13 yards to Elbie Nickel, later he is flexed right and is open on a curl route to score. Los Angeles 28 Pittsburgh 14. Late in the game Van Brocklin is still trying to put points on the board as Fears has now caught 10 passes for 122 yards. The Dutchman goes to the well once too often as right linebacker Frank Sinkovitz intercepts the goal line. Gary Kerkorian is in at quarterback and completes a 21 yard pass to Nickel. He has now caught 10 for 202 yards, thus for the FIRST time in league history a receiver for both teams has had a 10 catch game for over 100 yards receiving. The game ends on the Ram forty-three with Kerkorian being snowed under for a 14 yard loss by the Los Angeles pass rush. Los Angeles will play Detroit in the tie breaking conference game.
SUMMATION: Joe Bach will return in 1953 with a young team on the rise on offense as for the first time in team history they have scored 300 points.
Posted by Coach TJ Troup at 9:25 AM