Merlin Olsen: The Best I Ever Saw 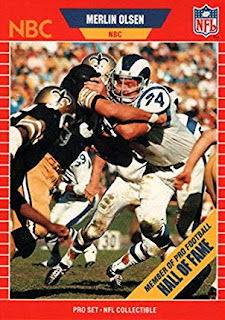 In September 2008, I had a chance to interview Merlin Olsen near his home in Park City, Utah. We'd talked in the mid-1990s and in the early 2000s and then sometimes via email after that if I had a question.

This time he generously gave me a list of the best players he saw during his playing and broadcasting career in the NFL which spanned from the early 1960s through the early 1990s. 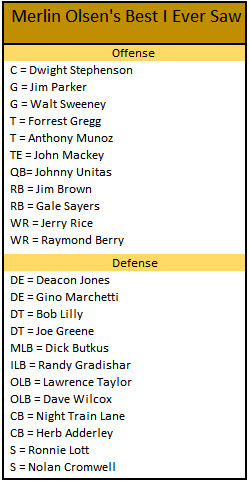 Offense
Center
"Stephenson was the quickest I saw and had great strength, too. It was a pleasure watching him in the games I covered for NBC."

Guard
"Jim Parker played on the opposite side but I had to be prepared for him on traps, he gave the hardest blows of anyone. He moved incredibly well for a guy who was 300 pounds."

"Back when preseason games meant something, even personal pride, I'd have tough battles with Walt (Sweeney). He had great strength for his size. He was the toughest I faced, though Jerry Kramer was very good, too."

Tackle
"Deacon would tell you that Forrest was the best he had to deal with. We'd play Green Bay twice a year and Gregg always played Deac well".

"Like Dwight (Stephenson) Anthony (Munoz) was something to watch. I saw him plenty in the eighties and he always was prepared and always played well."

Tight End
"Because of Deacon, teams didn't throw to the tight end against us (Rams defense). But the Colts were the exception because Mackey had the skills to chip Deacon and still get into the pass pattern. And he could block well, I had to have my head on a swivel because he'd down-block you sometimes and could deliver a shot on you."

Quarterback
"My quarterback is John Unitas. You could not intimidate him, everyone else you could."

Fullback
"Jim Brown was far ahead of everyone."

Halfback
The one guy who made our defense look silly was Gale. He had quick moves that would leave us flat-footed."

Split end
"Raymond Berry had the best hands I saw and had the best moves and was the best end at running his routes to perfection."

Flanker
"Watching what Jerry Rice did was special. You wouldn't think one guy could be that much better than everyone else at his position in the league."

Defense
End
"I cannot leave Deacon out. I think he had more speed and quickness than anyone at his position and that goes to this day. Maybe people will think I am biased but it would be wrong to not name him as the best—because he was.

Gino was an idol to me when I came into the league. Even though he played outside I watched many canisters of film on him and how he'd grab players and toss them aside fascinated me. Doug (Atkins) could do that, too but he was not as consistent as Gino.

"In games, I covered Reggie White and Howie Long were the best I saw but I cannot honestly say they were better than Deac and Gino."

Tackle
"Joe Greene would be my left tackle and Bob Lilly would be on the right. They would work well together. Joe and I were kind of similar and Bob and Alan Page were similar. I could have played with Bob and Alan, but not with Joe.

We'd have messed each other up, getting in each other's way."

Middle Linebacker
"Dick Butkus was the best in the middle. It would have been wonderful if he'd had a chance to play with a better team. He'd have been better than he was, and he was pretty good (smile)."

Inside Linebacker
For a 3-4 linebacker, Randy Gradishar was the best I saw. I never saw a linebacker who made so many initial stops. It seemed like he was always first to the ball and was a solid hitter, too. Some linebackers would sometimes fall on the piles and get their number called but in the games, Dick (Enberg) and I did it was always "Randy Gradishar on the tackle" and they'd get up and he'd be the last one getting up."

Outside linebacker
"I didn't cover many games of the Giants but we did enough to know that Lawrence Taylor was the best at his job. If he came up in the 1960s or 1970s he would have been put at defensive end. But in the 1980s with the 3-4 defenses that were popping up, the ideal athlete met with the ideal scheme. I sometimes wonder what he might have done as an end, that he may have been a Deacon Jones on the right side.

"The 4-3 outside linebacker I liked the most was Dave Wilcox. He had great size for that era but could still run. Right behind him would be Dave Robinson who also was big, but could run and cover.

I was always jealous of the 49ers and Packers linebacking squads because of their athleticism and size and strength. Our linebackers weren't very good and as a front four, we have to cover for them at times. They just were smaller, slower guys who got by on their brains and George (Allen) if we'd had a Wilcox or someone like that we'd have been that much better. Out linebackers just didn't make the kind of plays you'd expect, you know, game-changing plays."

Cornerbacks
"By the time I came to the NFL Night Train was slowing down some, but he still was an intimidator and a gambler our quarterbacks were told to stay away from.

Herb Adderly is the next best I ever saw. He was somewhat smaller than Lane but was a big hitter. He was also a gambler who was a cornerback who could be deadly to an offense."

Safeties
"There were some good ones when I played but to me, Ronnie Lott was the best I saw. He could play cornerback but was a hard-hitting safety and smart player. He was like a Night Train Lane who was playing safety.

"Nolan (Cromwell) got hurt but looking back on my career I cannot think of anyone who could do more things as a safety. He had more range than Lott and had great leaping ability. He was a good hitter but not as rough as Lott but he'd hit, but more importantly, he'd not miss tackles. And he couldn't be fooled too often. I saw him play cornerback some and also linebacker in some of the Rams schemes. But yeah, outside of Lott there is no safety I'd want on my team more than him".
Posted by John Turney at 8:00 PM No comments: