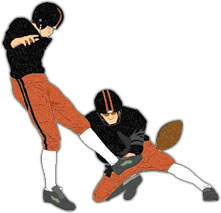 Well, in this exercise "NFL history" begins in the 1950s but we will be guilty of 'recentism' because there is more data these days to go by than in the 1950s and 1960s. But we do hope to share some names you have not heard in a while or maybe never had heard of.

Do enjoy, and correct us if you think we missed someone...we likely have.

1. Nolan Cromwell—He's number one on Rick Gosselin's list as well. The reason we have him number one is that he's one holder that could win or seal a game with a fake. We've seen him do it quite a few times, more than anyone else. He was a tremendous athlete with great speed and good hands. He also was a college quarterback so he could throw as well.

There may be a holder or two with slightly better hands but no one had his legs and impact on a game. Cromwell was a true weapon.

It should also be noted he was a good special team player on the punt block team (six career blocks) as well. And was often the safety on the kick coverage teams because he was a good tackler and had excellent speed so using him as the last line of defense was a good idea.

2. David Humm—Said by Bob Chandler to have the best hands ever. 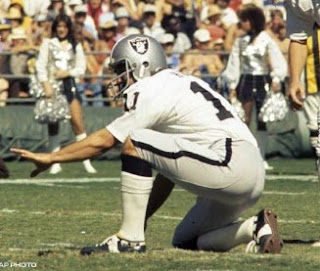 3. Brad Maynard—Ranked second by Gosselin, we will go with that. 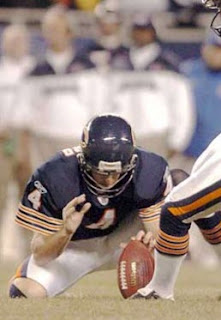 4. Paul Krause—Ranked third by Gosselin. Note that Krause is old school in that he has his front leg forward. You don't see that anymore but it used to be the norm.

Now players are coached not to do that is because it's dangerous for the holder to have his front leg sticking out because somebody could land on it. Although Krause does have it tucked as opposed to Whitsell (below) so the leg is not as vulnerable.

Also, when a holder kneels on his front knee he can use the back leg as a backstop since that where where he's catching the ball and placing it so the spot and setting the ball down becomes much more consistent and less prone to error. 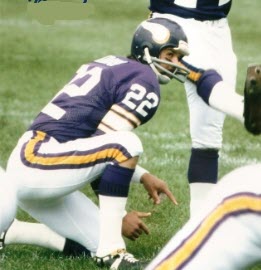 5. Dave Whitsell—Excellent holder and the best edge place kick blocker ever. There may be a couple inside rusher with better numbers but no one from the edge. As mentioned Whitsell has his front leg stretched out like Krause and is kneeling on his back knee. In this position, an edge rusher could lay out and land on the outstretched leg and possibly cause an injury, 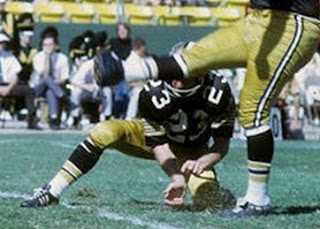 6. Sam Koch—These days the snappers and holders are so good that it's hard to critique them. Koch represents the near perfection of today's holders, almost all of who are punters. What we know is on his watch the kickers have been great. 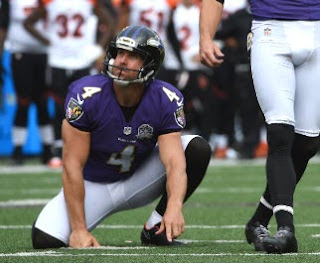 8. Bob Chandler—Held for the Bills and then the Raiders. 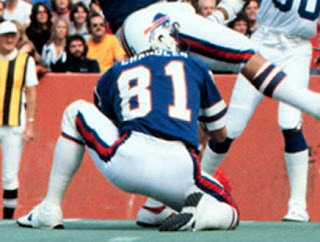 9. Hunter Smith—Called by one of his special teams coaches, "The best ever". 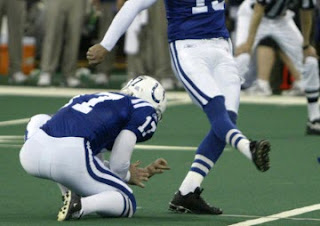 10. Eddie Meador—Like Cromwell, also a Ram and also wore #21, he could execute a fake as well as anyone outside of Cromwell. He rushed for 59 yards on six fakes and one touchdown and also threw a touchdown on a fake. 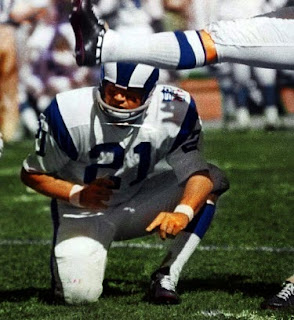 11. Joe Theismann—Quick out of his 'holder kneel' could roll and throw. We do know he wasn't loved by Deacon Jones. In 1974, in the final game of the season, the Redskins were blowing out the Chicago Bears. Jones talked George Allen into letting him kick an extra point if the Redskins scored a touchdown, which they did. However, Theismann refused to hold for Jones until the Deacon had a word with him, "I had the threaten the little prick to get him to hold for me".

Also not Theismann is kneeling on his back knee, perhaps one of the last to do it that way. But as we know, Theismann's leg was not injured when he was holding for a kick. 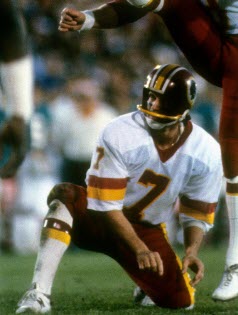 15. Koy Detmer—Stayed in the league largely because he could hold. One of the last of the quarterback-as-holder era.

16. Brian Baschnagel—Another high ranker in the eyes of one pro scouting firm. 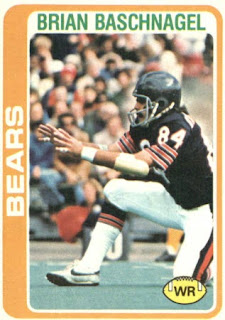 17. Roger Wehrli—Scored a touchdown on a fake in his first and last NFL season. 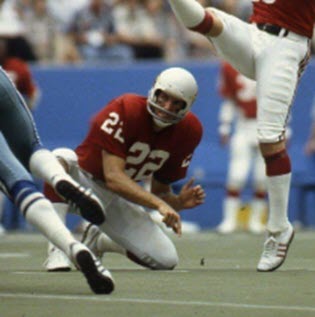 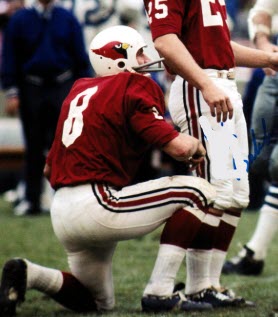 19. John Sciarra—Interesting player. A college quarterback converted to safety but would sometimes play quarterback in goalline situations for the Eagles. 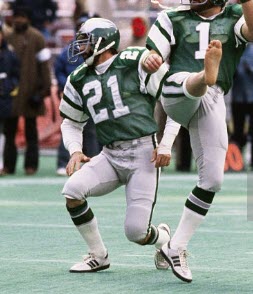 20. Johnny Hekker—Anyone who can hold and point out to the referee that there are 12 men on the defensive side of the ball at the same time deserves a spot here. He also can throw on fake kicks like he does on punts. 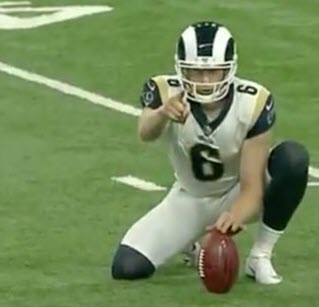 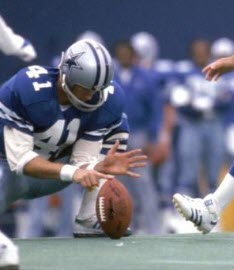 Sure, we could list many more names, but we just can only assume guys like Sonny Jurgensen, John Brodie, or Len Dawson or all the punters now did a good job our someone else would do it. George Allen, in his 1985 book on special teams mentioned Richie Petitbon and Bobby Boyd of the Colts as well.

As we've mentioned would love some anecdotal evidence from kickers, snappers in the NFL and the retired guys to hear some stories as to why their guy, their holder was the best.

Long Snappers
We've sorted them by games played but that is not how we rank them. We really cannot rank them because there is not a way we know of to do that, short of tracking each snap's accuracy and velocity.

We do, however, talk to people we trust and get input about that. One person said the most important things are #1 Accuracy #2 Not having a "hitch" prior to the snap #3 Velocity.

The names on the list that played 105 games or less (aside from Anno) are recommendations from George Allen in his book on special teams.

That order sounds fine to us.

After that, we'd go with Junkin, Hellastrae, Dorenbos, Mike Morris, Zak DeOssie (probably the best at getting downfield and making tackles since Rich Saul), Mike McDonald (maybe had the best accuracy and velocity and no "hitch"), Dan Turk.

Bush and Maples were starting centers a good portion of his career, Tingelhoff was a starter his whole career and handled all snaps. Bobby Bell and D.D. Lewis were starting linebackers.
Who was the first? No one knows. Could it be Joe Reid of the 1951 Rams? We've seen films of that team and the only time we saw #52 was long snapping but not enough to know how many games he did it. He didn't begin the season doing it (he was a tookie) but did, at some point, take over the job. So, the question remains.
Tom Catlin snapped for the Browns in 1958 and was not the starting center (1957, too, but missed four games) and George Allen named him as one of the best he'd ever seen. He certainly was a pioneer of an exclusive snapper for kicks.
George Burman was the Rams long-snapper from 1967-70, though he missed 1967 with an injury and often didn't snap for placekicks, only punts until 1970. That year he was the long snapper for both placements and punts. He went on to do the same for Washington the next couple of seasons.

So, if we've omitted anyone, please let us know. We are sure that guys like Jim Otto did a credible job but we'd love to hear the stories. With some of the field and game conditions back in the day sometimes just getting a kick or punt off was likely a feat. So if there is more to this we are all ears, we would love to learn more about the esoteric aspects of special teams play.
Some notables, though not a complete list of snappers