1956 Defensive Players of the Week: The 4-3 Middle Linebacker Era Begins in Earnest

Mr. John Turney has done his usual splendid job on detailing Gino Marchetti's career. To dovetail into what Turney wrote; Marchetti's interviews with NFL Films gave insight into what this man was all about.

My personal favorite story on Marchetti comes from my former pen pal Mr. Raymond Berry. Berry stated emphatically that Marchetti would pace the locker room like a caged lion before games, and then the Hall of Fame receiver remarked that "I just don't see that much anymore".

Gino came to play and was fortunate to see him in the Coliseum in the Pro Bowl after the '64 season. Marchetti show zeal above and beyond in slamming Frank Ryan to the turf (revenge for title game loss). Now onto 1956, and who do we start with—yes, the one and only Mr. Gino Marchetti. 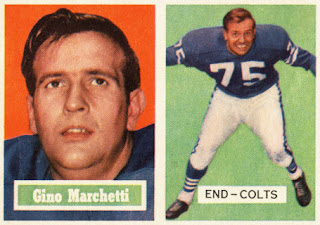 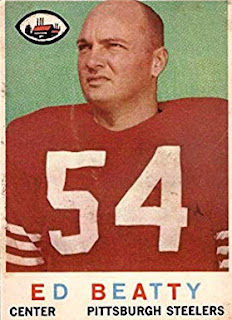 October 7th: We have co-defenders of the week. Rookie linebacker Ed Beatty ties a league record with three opponent fumble recoveries in the back and forth 33-30 win by the Niners over the Rams. Bill Wade is flushed from the pocket, rolls left is hit and the hustling Beatty wraps his arms around the ball before it goes out of bounds. 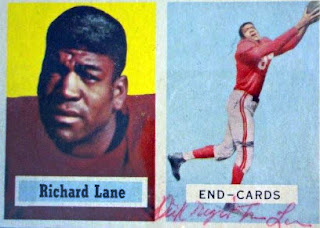 Joining Beatty is the starting left corner of the Cardinals—Richard Lane. Chicago is down 13-7 as Conerly throws towards the sideline. The Night Train strides in front of the receiver and is off down the sideline for 66 yards and a touchdown. The Cardinals win 35-27 to remain in first place.

This is the only Cardinal team with a winning record in the decade, and the main reason on defense is the superb coaching job by new assistant coach Wally Lemm. The young coach molds Lane and his cohorts into an airtight secondary that allows only eight touchdown passes all season, and leads the league in the defensive passer rating with a mark of 33.5. 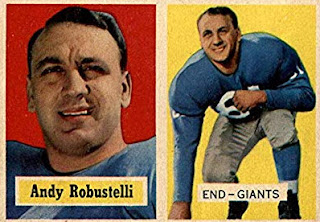 October 14th: Andy Robustelli has his best game ever rushing the passer as he garners four sacks (Lou Groza just cannot keep Andy out of the backfield) in the 21-9 victory over the defending league champion Cleveland Browns. 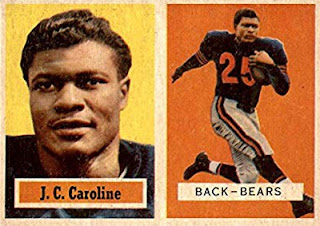 October 21st: In the Clark Shaughnessy defense the key word is 'attack' the offense from a variety of defensive alignments with an assortment of "red dogs". Man-to-man coverage is demanded by the cantankerous old man and there has been a revolving door at the left corner position for the Bears since 1951.

This situation changes dramatically in '56 as rookie J.C. Caroline plays this difficult position with aplomb. He intercepts a Unitas quick out and scampers 59 yards for a score in the Bears 58-27 rematch victory over Baltimore. Earlier in the game, Johnny Hightops cut Caroline down in the open field on a breathtaking Lenny Moore run. Caroline intercepts six times in a seven-game span and earns a trip to the Pro Bowl. 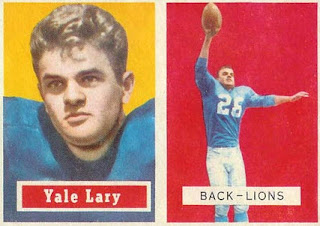 October 28th: Yale Lary has returned from the Army and is back at his right safety post for Detroit. On this sunny afternoon in the Coliseum, he pilfers three passes (all key plays) in the Lions 16-7 win over the Rams. 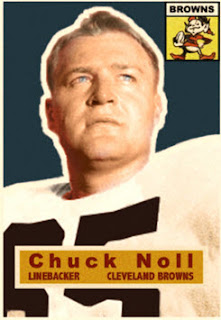 November 4th: We again have co-defensive players of the week. Opening day in 1969 the Pittsburgh Steelers beat Detroit. The two head coaches are our players of the week. Al Carmichael on a draw play for the Packers his hit at the line of scrimmage by the middle of the Browns defense. The ball hits the ground and is kicked forward a few yards. Left linebacker Chuck Noll of Cleveland snaps up the loose ball and dashes towards the flag and scores on a 39-yard fumble return in the 24-7 win.

The Lions are in an over-shifted 4-3 with middle linebacker Joe Schmidt aligned over the left offensive tackle. Fullback John Henry Johnson of San Francisco bursts through a hole a right guard and motors 54 yards deep into Lion territory. The Niners will gain just 39 yards rushing on the other 30 running plays they try as Joe Schmidt is just not going to allow San Francisco to knock Detroit from the unbeaten ranks.

Twice the Lions stop the 49ers on fourth down rushing plays, and Schmidt is involved in both plays. The famous photo of Schmidt with his back bowed trying to stop John Henry at the goal line is from this game. San Francisco cannot score an offensive touchdown as Detroit hangs on 17-13. 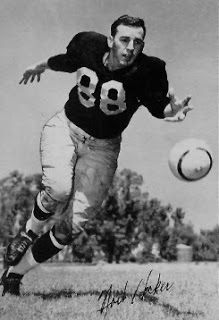 November 11th: The unbeaten Lions last won a game in Washington in 1935. The head coaches of their respective teams were Cardinal teammates in 1940 & 1941. Joe Kuharich continues to believe that his ground attack can gain against the staunch Lion defense, but who is going to stop Detroit when they have the ball?

Buddy Parker has Bobby Layne pitching the ball all over the yard today, and though he has some success; our player of the week intercepts Layne twice. Norb Hecker playing left safety in the first quarter steals an errant Layne pass, and playing right safety in the fourth quarter nabs his second in the 18-17 Redskin victory to keep them in the Eastern Conference race. Hecker intercepts in five consecutive games in '56 (eight for the season). 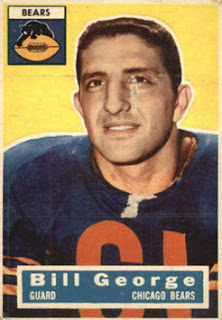 November 18th: The Bears need to continue to win to keep pace with Detroit and today at Wrigley middle linebacker Bill George pillages the Rams pass pocket as he records three sacks in the 30-21 win. The Bear defense will rank second in the league with 220 yards in sack yardage. 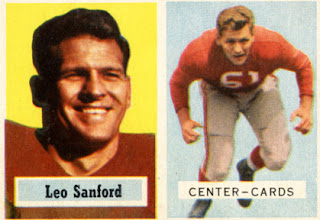 November 25th: Lou Baldacci and Fran Rogel combined to gain 222 yards rushing in the Steelers victory over the Cardinals the week before, but today they gain a paltry 29 yards on twelve carries in the 38-27 Cardinal victory. Right linebacker Leo Sanford is one of only four Cardinals that remain from the team in 1951, he has played strong football now for six seasons. The durable Pro Bowl bound Sanford has recorded 25 takeaways (fumble recoveries and interceptions) in the 72 games he has played. He leads the Cardinals to victory to remain in the Eastern conference race at 6-3—just a half game behind the Giants. 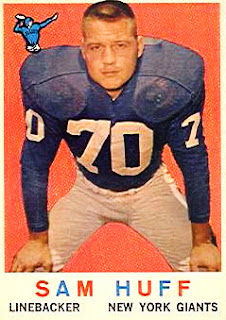 December 2nd: The injury to middle linebacker Ray Beck during the second game of the season left a gigantic void in the New York Giants defense. Rookie back-up defensive tackle Sam Huff has improved each week in trying to fill that void. Today he returns interceptions 12 and 10 yards respectively in the 28-14 win over the Redskins. The Giants are now in a position to win the Eastern Conference with a record of 7-2-1. 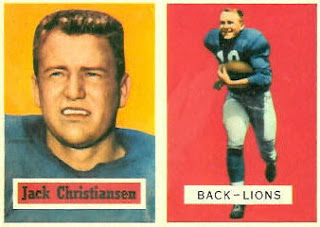 December 9th: After crushing the Bears the week before, the question in Detroit is a simple one; will they be motivated against the Steelers? In the first quarter, Teddy Marchibroda throws towards the right sideline. Left safety Jack Christiansen knifes in front of Ray Mathews and the Lions have the ball.

Marchibroda passes to right end Elbie Nickel in the second quarter, and Jack again pilfers the pass and dashes 22 yards deep into Steeler territory. This theft leads to a field goal and an insurmountable 38-7 lead. Christiansen plays his usual strong game in run support also as Pittsburgh gains just 25 yards rushing on 33 carries. The Detroit victory sets up the showdown in Chicago. 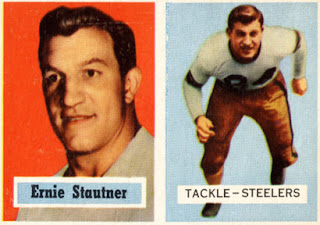 December 16th: We finish the season with co-defenders of the week. Pittsburgh has never beaten Washington twice in a season, and though he always gives maximum effort Ernie Stautner just does not have many multiple-sack games so far in his career. Ernie records 1½ sacks in the mud today as the Steelers shut-out Washington(first road shut-out since December of '49).

Left defensive end Jack Hoffman attacks the Lion pass pocket and garners three sacks in the 38-21 win over Detroit to win the Western Conference title at Wrigley.
Posted by TJ Troup at 11:14 AM