1955 NFL Defensive Players of the Week: Defensive Changes and Adjustments in the League. 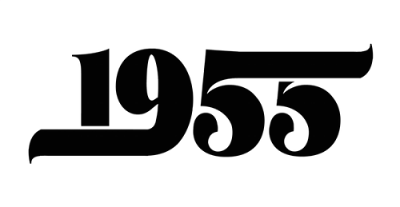 The first half of the decade of the 1950s saw some teams transition from the 5-3-3 to a 5-2-4 defense, and almost all teams try some form of 4-3 or 6-1 defense. The Giants in 1950, and the Redskins in '53 would use the 6-1 or 4-3 the most—yet no team would align in the modern day 4-3 virtually every down when on defense. My book "The Birth of the Modern 4-3 Defense" details who played what positions for each team for the 1953 and '54 seasons, and how the teams aligned on defense. The 1955 campaign is the season of defensive transition as many of the twelve teams now aligned at least part of the time in a 4-3.

Which team aligned in the 4-3 the most you ask? Why, the now revitalized Washington Redskins; and as you read about this season you will read about three different Washington players garnering player of the week. One final note before the listing; "sack" yardage dropped significantly from 233 on average per team to 190. The main reason is the adjustment of the defensive ends in their alignment and their newfound responsibilities to off-tackle run plays. 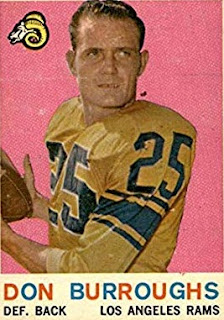 September 25th: Left safety Don Burroughs of the Rams intercepts 3 passes for 37 yards in the 23-14 road victory over San Francisco at Kezar. Burroughs is the second rookie in league history to intercept three times in his very first game as a pro (Lujack was the first). 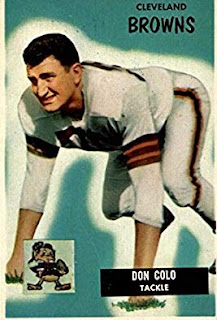 October 2nd: New 49er head coach Red Strader is not off to a very auspicious start as his boys are crushed by Cleveland 38-3. The usually formidable 49er ground game is limited to just 67 yards as right defensive tackle Don Colo is a stonewall in defending the run. Big Don survived three lost years with the Colts, Yanks, and Texans—but has now developed into a Pro Bowl player for the defending champion Browns. 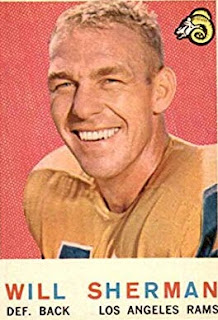 WEEK FOUR
October 16th: San Francisco is down 24-6 entering the 4th quarter at Detroit. Left safety Rex Berry makes the key play in the 49er comeback victory. Gilmer throws behind his intended receiver who manages to get a hand on the pass but tips the ball towards the muddy ground. Berry makes a shoestring catch, and dashes 44 yards to pay dirt. The Niners with a record of 2-2 still have designs on being a factor in the western conference with successive road victories. 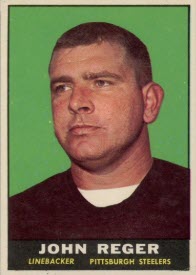 October 23rd: Free agent right linebacker John Reger has been impressive so far in his rookie season for Pittsburgh, and with a victory today over New York would stay tied with Cleveland atop the Eastern Conference with a 4-1 record. Reger grabs a Giant fumble and rumbles 4 yards before a lateral to fellow rookie Richie McCabe who sprints an additional 26 yards. This is one of the key plays in the Steelers 19-17 come from behind win. Reger will go onto rank among the league leaders in opponent fumble recoveries with 5.

WEEK SIX
October 29th: Green Bay and Baltimore are both 3-2 and this Saturday nite showdown will help determine who is really a contender in the west. Packer quarterback Tobin Rote rolls right and throws back across the field deep. His errant toss is pilfered by our defensive player of the week; right cornerback Don Shula. The veteran returns the ball 31 yards setting up the Colts first touchdown in a 14-10 win. 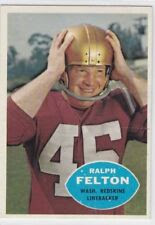 November 6th: Washington with a 3-3 record must win today to have any chance of staying in the race in the Eastern Conference. The Redskin 4-3 defense is playing strong football, and today in the 34-21 win over longtime rival Philadelphia is no exception.

Second-year left linebacker Ralph Felton has many responsibilities depending on the down and distance for the 'Skins, and today is by far his best game of the season. Undersized, yet very quick Felton records two sacks and two fumble recoveries along with a number of tackles.

WEEK EIGHT
November 13th: The pass rush is still a key element in the game, and that fact is on display today as two of the men who dominate defensive line play for the rest of the decade are co-defensive players of the week. Doug Atkins did not live up to Paul Brown's expectations in Cleveland, and the massive Atkins is still not a starter in Chicago. He earns playing time at both left and right defensive end, and today in a game the Bears must win records two sacks in the 24-3 win over first-place Los Angeles.
Gene Brito has returned from Canada and is a force at his left defensive end position. His fourth-quarter pass rush is a textbook example of how to rush the passer. He knifes into the backfield, chases Tittle, and knocks the ball from the 49er passer's grasp. Grabs the pigskin and returns the fumble 7 yards setting up the lone touchdown in the Redskin victory over San Francisco.

Brito would have deserved consideration for defensive player of the year honors in the league if such a reward existed and for his work in the game he is the our co-Defensive Player of the Week. 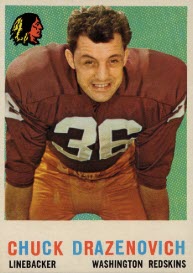 November 20th: Three weeks in a row a Redskin is defensive player of the week. In Jack Clary's book on the Redskins (Great Teams Series) by NFL Properties, there is a chapter on Chuck Drazenovich. Having watched a virtual ton of Washington film it is easy to see why the 4-3 was made for "Charley Cro". Quoting Clary, "Drazenovich is one of the "pioneers of the modern middle linebacker".

Today, in a 31-0 road shut-out of the Cardinals, he just would not stay blocked as he makes plays all over the field. Chicago gains just 72 yards rushing, and the Redskin pass rush has now recorded 13 sacks in the three-game win streak. Washington is now 6-3 with their first road shut-out since 1945 and trails the champion Browns by just one game.

WEEK TEN
November 24th: The Packers must win today on Thanksgiving to stay in the race in the western conference. Green Bay and Detroit combine to turn the ball over 9 times in the first half as the Lions win 24-10. Our co-Defensive Players of the Week are Lions left cornerback Jim David who intercepts twice for 44 yards, and middle linebacker Joe Schmidt as he recovers a Packer fumble in the second quarter. This is his 7th recovery for the season setting a new league record.
WEEK ELEVEN

December 4th: Don Paul earned a Pro Bowl berth as a Chicago Cardinal, and has played superb defense at right corner for Cleveland. Though he will not yet garner a Pro Bowl berth as a Brown, he has an outstanding season in '55 and today is his best game of the year. Jim Finks over throws Ed Bernet of the Steelers, and Paul pilfers the pass and darts 19 yards. Don later intercepts again and returns a Steeler fumble 11 yards as Cleveland demolishes Pittsburgh 30-7 to remain in first place. 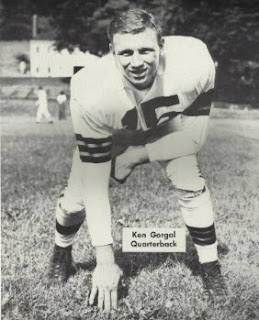 December 11th: The masterful trade of two future draft picks in '56 to Cleveland has brought to Chicago Doug Atkins, and left safety Ken Gorgal. The Bears must win today at Wrigley and have the Rams lose to win the west. Earlier in the season Gorgal had intercepted in four consecutive games to tie a team record, and today he will make key plays in the Bears 17-10 victory over Philadelphia. Adrian Burk escaped the pass rush, rolled to his left and lofted the ball down the middle towards Bobby Walston. Gorgal darts in front of the receiver and intercepts (returning 22 yards), and later in the game recovers an Eagle fumble.
Our co-Defensive Player of the Week is in his last year as a Los Angeles Ram. Green Bay is ahead of the Rams 14-10 at the half, but Robustelli with help records two 3rd quarter sacks for 24 yards in the 31-17 Ram victory that secures the Western Conference crown.
Posted by TJ Troup at 7:26 AM