1962 AFL Defensive Players of the Week 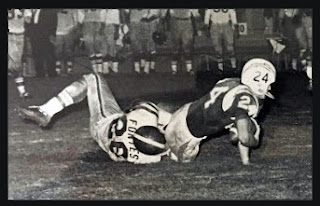 Titans defensive back Wayne Fontes, a rookie out of Michigan State, earned Defensive Player of the Week honors with an outstanding effort in his debut as a pro.  Fontes, who would gain greater fame as head coach of the NFL Detroit Lions (1989-96), recorded an interception, a fumble recovery and a pass defensed in New York’s 28-17 win over the Raiders at Frank Youell Field.

This marked the first year in which Denver’s Goose Gonsoulin did not win the DPOW honor in the opening week of games.  Gonsoulin had won it in 1960 and ’61. 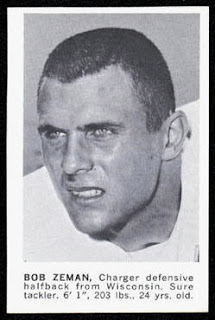 The Denver Broncos remained undefeated after two games with a 23-20 win over the Bills at Buffalo’s War Memorial Stadium. Safety Bob Zeman, acquired from the Chargers during the offseason, earned DPOW honors by swiping two Al Dorow passes, including one on Buffalo’s final drive to secure the three-point victory. The former Wisconsin Badger also recorded five tackles in the win. 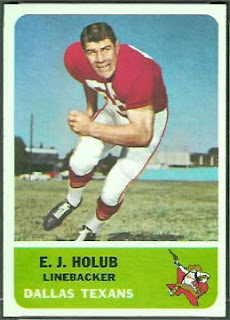 Dallas’ tough-as-nails linebacker E. J. Holub was outstanding in the Texans’ 26-16 victory over the Raiders at Frank Youell Field. The Lubbock, Texas, native recorded three quarterback sacks and an interception to help his team remain undefeated on the season. 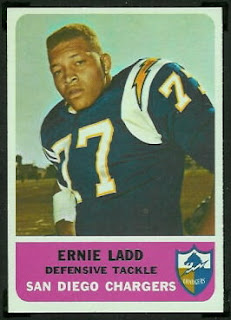 As a result of the inconsistent and often incomplete recording of stats in the AFL’s early days, defensive linemen tended to fly under the radar since those stats that would shine light on them (such as sacks and tackles) were unavailable, as opposed to interceptions and passes defensed, which tended to spotlight DBs and LBs. So it’s always nice to find a fairly complete gamebook, like the one we have for the Week 4 game between the San Diego Chargers and Oakland Raiders, that details yeoman work done by those often overlooked down linemen.  Ernie Ladd, San Diego’s massive defensive tackle (six feet, nine inches, 290 pounds), had 4 ½ sacks in the Chargers’ 42-33 win over the Raiders at Frank Youell Field. Two of the Big Cat’s sacks came on Oakland’s final two possessions, securing the win as the Raiders had already clawed their way back from a huge deficit, having trimmed the Chargers’ lead from 25 points down to nine. 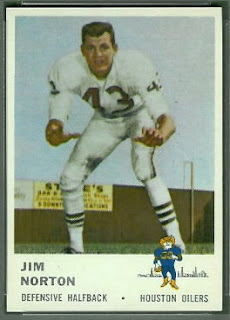 Norton’s pair of picks gave him three thus far on the season, all coming against the Bills. 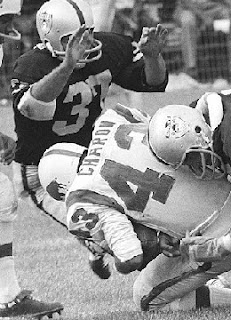 Buffalo’s rookie defensive back CarlCharon performed like a wily veteran in Buffalo’s 35-10 blowout of the San Diego Chargers on a Saturday night in Buffalo. Charon had two interceptions (not three, as stated on PFR) in the win, and punctuated his performance with a sack of Chargers quarterback John Hadl on a safety blitz, good for a 15-yard loss. The Boston Patriots were sitting in a good position in the East division, a game above .500 (3-2) but still a full game behind division-leading Houston (4-1). As a result, every game was essential for the Pats at this point, and All-AFL linebacker Tommy Addison was determined to keep his team in the playoff hunt. Addison was a terror against San Diego in Week 6, picking off two passes in the second quarter and recording a sack in the fourth in Boston’s 24-20 win at Nickerson Field, and earning Defensive Player of the Week honors for his efforts. 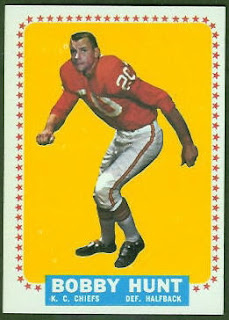 After seven weeks, the Dallas Texans, at 5-1, found themselves a game behind in the West division race with the surprising 6-1 Denver Broncos, making every game at this point a must win. In what proved to be a preview of the AFL Championship Game, the Texans picked off six George Blanda passes, including three by this week’s DPOW, rookie safety Bobby Hunt, in rolling to a 31-7 win at Houston’s Jeppeson Stadium. The three interceptions gave the Auburn alum a league-leading seven in seven games played so far this season. 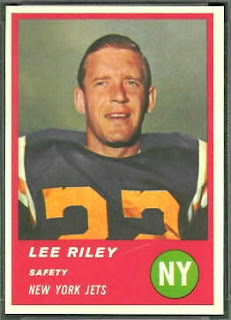 Safety Lee Riley spent five years with three different NFL teams (Lions, Eagles and Giants) and one season in the AFL with the Titans, but never enjoyed the success he was finally experiencing in his seventh pro campaign. The lanky Nebraskan registered two interceptions and a pass defensed in the Titans’ 31-21 vanquishing of the Oakland Raiders in the Polo Grounds. The two interceptions gave Riley six so far this season.  He’d finish the year with a league-best 11, but somehow was not voted All-AFL or chosen to play in the AFL All-Star Game. 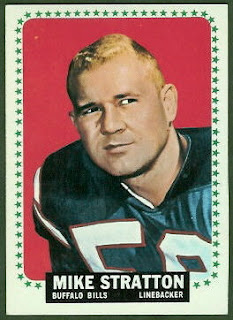 Rookie linebacker Mike Stratton starred for the Bills as they invaded San Diego’s Balboa Stadium and walked away with a convincing 40-20 win over the sinking Chargers. Stratton picked off two John Hadl passes (for 59 yards) to help keep the Bills in the hunt and extend their unbeaten string to five games (four wins, one tie).  For the Chargers, it was their fifth-straight loss, effectively eliminating them from the post-season race. 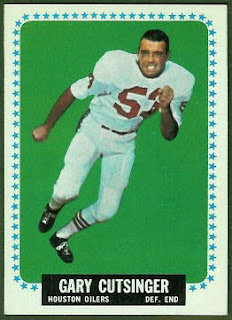 The Boston Patriots (6-2-1) were holding a tenuous ½-game advantage over the Houston Oilers (6-3) for the Eastern division lead as they visited Houston’s Jeppeson Stadium for this Week 11 showdown. The Oilers were ready, led by defensive end Gary Cutsinger, who recorded a fumble recovery and four tackles in this crucial contest, including a sack of Pats QB Tom Yewcic on Boston’s final drive to essentially seal the 21-17 victory.  The Oilers leap-frogged over the Patriots to claim the division lead. 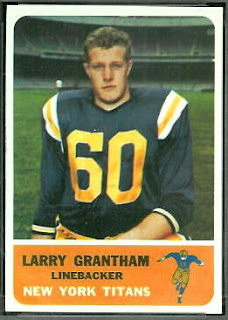 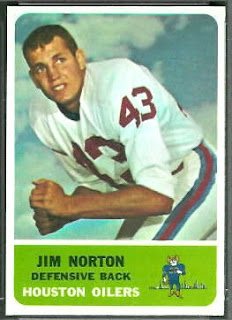 With the end of the regular season closing in, the Houston Oilers and Boston Patriots remained locked in a very close race for the Eastern division pennant. Coming into Week 13, the Patriots were 8-3-1 while the Oilers stood at 8-3.  While the Patriots were enjoying their bye week, the Oilers hosted the Denver Broncos, who were mired in the midst of a three-game losing skid.  The Oilers had to win to keep their hopes alive, but quarterback George Blanda, despite throwing three TD passes and kicking two field goals, very nearly blew it by throwing five interceptions.  So it was up to the defense to pull the Oilmen from the jaws of defeat.  In one of the finest defensive displays of the 1962 season, Houston defenders picked off eight Denver passes, led by this week’s DPOW, Jim Norton, who recorded three thefts of his own to win, in the Oilers’ 34-17 win at Jeppeson Stadium.  It was the Idaho alum’s second DPOW award of the season.

The victory improved the Oilers to 9-3, and gave them a half-game bulge over the Patriots with two games remaining. 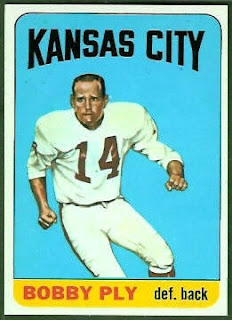 Rookie defensive back Bobby Ply had a huge game this week, recording the first three interceptions of his career in the Texans’ 17-10 victory over the Broncos at the Cotton Bowl. Ply, who played quarterback while a collegian at Baylor University, pinched Denver aerials on back-to-back drives in the fourth quarter, essentially sealing the win for playoff-bound Dallas, who improved to 10-3 on the season. 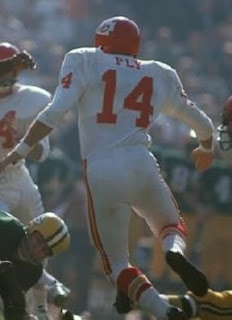 Now, no one ever accused Bobby Ply of being one of the all-time greats.  In fact, in the six years of professional football, he was destined to play, Ply never appeared in an All-Star game or received an All-Pro mention. But for one glorious two-week stretch during the 1962 campaign, Ply sure looked like a man destined for gridiron immortality.  In the final two weeks of this season, Ply did something no player had done before or since. After swiping three passes in the Texans’ Week 14 victory over Denver, Ply grabbed four more the following week against the Chargers, giving him seven interceptions over two consecutive games, a record that stands to this very day.  What’s even more curious about Ply’s feat is the fact that these seven picks were his total for the entire season, and he would record only two more the rest of his career!

The Texans had already sewn up the Western Conference crown but had never defeated the Chargers in five previous matchups. Behind Ply’s four interceptions, the Texans broke the string and notched a 27-17 triumph.